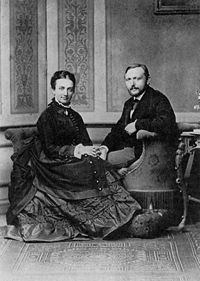 Krafft-Ebbing is famous for his book Psychopathia Sexualis (1886), a study of "sexual perversity," and for his coinage of the terms "sadism" (after the name of Marquis de Sade) and "masochism" (using the name of a contemporary writer, Leopold von Sacher-Masoch, whose partially autobiographical novel Venus in Furs tells of the protagonist's desire to be whipped and enslaved by a beautiful woman). Krafft-Ebing was both praised and condemned for his work—praised for opening up a new area of psychological study, condemned for immorality and for justifying and publicizing homosexuality. His work, although not necessarily intentionally, laid the foundation for the "Sexual Revolution" of the later twentieth century in which sexual abstinence and the sanctity of marriage were no longer valued and promiscuity and homosexuality became popularized.

Richard Krafft-Ebing was born in Mannheim, Baden, Germany, on August 14, 1840. He received his education in Prague, Austria-Hungary (now in the Czech Republic), and studied medicine at the University of Heidelberg.

He was a popularizer of psychiatry, giving public lectures on the subject as well as theatrical demonstrations of the power of hypnotism. Krafft-Ebing has written on criminal behavior, the medical perspectives of hypnosis, as well as on male and female sexuality and sexual behavior. Krafft-Ebing's basic psychiatry text was considered by many to be undistinguished, yet it is credited with influencing Carl Jung to choose psychiatry as a medical specialty. Krafft-Ebing's writings also influenced the work of Sigmund Freud.

In his early work, Krafft-Ebing inoculated general paresis patients with syphilis. Since they did not contract the disease, he concluded that they must have had it previously, developing immunity. In this fashion, Krafft-Ebing demonstrated the link between syphilis and general paresis prior to the "serological tests," such as the "Wassermann" used today. At the Moscow International Congress of 1897, Richard Freiherr von Krafft-Ebing made popular the phrase "civilization and syphilization."

Yet, it is for his book Psychopathia Sexualis that Richard Freiherr von Krafft-Ebing has entered history.

First published in 1866, Psychopathia Sexualis ("Psychopathology of Sex") went through a dozen editions and many translations. The book was developed as a forensic reference for doctors and judges, in high academic tone. In the introduction of the book, it was noted that the author had "deliberately chosen a scientific term for the name of the book to discourage lay readers." He also wrote sections of the book in Latin for the same purpose. Despite all these efforts, the book was highly popular with lay readers: it reached twelve editions in his lifetime and was translated into many languages.

Krafft-Ebing believed that the purpose of sexual desire was procreation, and any form of desire that did not lead towards that ultimate goal was a perversion. Rape, for instance, was an aberrant act, but not a perversion, since pregnancy could result.

Krafft-Ebing saw and viewed women as basically sexually passive, and recorded no female sadists or fetishists in his case studies. Behavior that would be classified as masochism in men was categorized as "sexual bondage" in women, which was not a perversion, again because such behavior did not interfere with procreation.

In Western Civilization, Psychopathia Sexualis ("Psychopathology of Sex") was the first scientific discussion of homosexuality and consideration of the mental states of sexual offenders in judging their actions. It was also one of the first books to scientifically study "sexual topics" such as the importance of clitoral orgasm and female sexual pleasure.

At that time, male homosexuality had become a criminal offense in Germany and the Austro-Hungarian Empire, unlike lesbianism, although discrimination against lesbians functioned equally. After interviewing many homosexuals, both as his private patients and as a forensic expert, Krafft-Ebing reached the conclusion that both male and female homosexuals did not suffer from mental illness or perversion (as persistent popular belief held).

Krafft-Ebing became deeply interested in the study of the subject. He elaborated an evolutionist theory considering homosexuality as an anomalous process developed during the gestation of the embryo and fetus, evolving into a "sexual inversion" of the brain. Some years later, in 1901, he corrected himself in an article published in the Jahrbuch für sexuelle Zwischenstufen, changing the term "anomaly" to "differentiation." Krafft-Ebing's final conclusions remained forgotten for many years, partly because Sigmund Freud's theories captivated the attention of those that considered homosexuality a "psychological problem" (as did the majority at the time), and partly because Krafft-Ebing had incurred some enmity from the Austrian Catholic church by associating the desire for sanctity and martyrdom with hysteria and masochism (besides denying the perversity of homosexuals).

Some years later Krafft-Ebing's theory led other specialists in the area of mental health studies to reach the same conclusion.

Richard Freiherr von Krafft-Ebing was the first scientist who brought the terms sadism and masochism into psychiatry. The origin of the term sadism is associated with the name of Donatien Francois Marquis de Sade (1740-1815). Sadism takes its name from the writings and exploits of this French writer, found to have been one of the nine prisoners held in the Bastille, when it was stormed in 1789. The Marquis de Sade wrote novels in which he described scenes of torture and killing in a sexual context.

Krafft-Ebing also coined the term masochism, using the name of writer Leopold von Sacher-Masoch, whose partially autobiographical novel Venus in Furs tells of the protagonist's desire to be whipped and enslaved by a beautiful woman.

For decades, Krafft-Ebing's Psychopathia Sexualis ("Psychopathology of Sex") was the authority on sexual aberration, and was one of the most influential books on human sexuality. He was both praised and condemned for the book—praised for opening up a new area of psychological study, condemned for immorality and justifying perversion. Besides Psychopathia Sexualis ("Psychopathology of Sex"), Krafft-Ebing also wrote and published several valuable articles on psychiatry.

Today, most contemporary psychiatrists no longer consider homosexual practices as pathological (as Krafft-Ebing did in his first studies): partly due to new conceptions, and partly due to Krafft-Ebing's own self-correction. His work led to the study of transgenderism or transsexuality as another differentiation correctable by means of surgery, rather than by psychiatry or psychology.

Krafft-Ebing studied sadism as a pathology, and in contemporary understanding, it is closely linked to sexual crime. After their crime, sexual sadists behave normally until their next offense. They report no guilt or remorse. They usually feel a great relief of tension after the crime. Finally, they may consider that they are superior to the police, because they avoid detection. In fact, a sexual sadist "may feel himself to be inferior, except as regard to his offense" (Brittain, p. 199). This approach to understanding sexual crime in terms of sadism has its origin in Krafft-Ebing's research and papers.

Four of his books have appeared in English translations by Craddock: