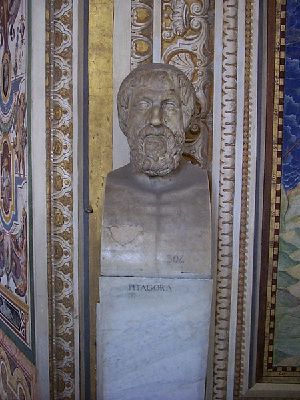 Pythagoras (c. 570 B.C.E. – 496 B.C.E., Greek: Πυθαγόρας) was a Greek pre-Socratic philosopher, a mystic, and a mathematician, known best for the Pythagorean theorem.

The earliest Greek philosophers in Ionia, known as the Ionians, such as Thales, Anaximander, and Anaximenes, explored the origin of existing beings and developed theories of nature in order to explain the natural processes of the formation of the world. Pythagoras, who was born on an island off the coast of Ionia and later moved to Southern Italy, explored the question of the salvation of human beings by clarifying the essence of existing beings, and developing a mystical religious philosophy. Pythagoras developed both a theoretical foundation and a practical methodology, and formed an ascetic religious community. Followers of Pythagoras are known as Pythagoreans.

Pythagoras approached the question of being from an angle that was different from that of early Ionian philosophers. While the Ionians tried to find the original matter out of which the world is made, Pythagoras dove into the principles that give order and harmony to the elements of the world. In other words, Pythagoras found the essence of being not in “what is to be determined” but in “what determines.” From Pythagoras’ perspective, the Ionians’ prime elements, such as Thales’ “water” and Anaximander’s “indefinite,” were beings that were equally determined, and they did not explain why and how the world was orderly structured and maintained its rhythm and harmony.

According to Pythagoras, “number” or mathematical principle was that which gives order, harmony, rhythm, and beauty to the world. This harmony keeps a balance both in the cosmos and in the soul. For Pythagoras, “numbers” are not abstract concepts but embodied entities manifested as norms, cosmos, and sensible natural objects.

The mathematical order in beings is perceivable not by the physical senses but by senses of the soul. Unlike the modern concept of mathematical exercises, Pythagoras conceived mathematics as the method for liberating the soul from the bondages of bodily senses and essentially as religious training. For Pythagoras, the soul is immortal and the cultivation of the soul is achieved by the studies of truth and the ascetic life. Aristotle noted that Pythagoras was the first person who took up the issue of “virtue” in philosophy (DK. 58B4).

Pythagoras opened a new path to early Greek ontology by his focus on the soul, virtue, and the ascetic life. He presented a new integral model of thought where the mystic and the mathematical or the religious and the scientific (as well as the aesthetic) are uniquely integrated. This type of thought is uncommon in mainstream philosophy today. Like other wise men of antiquity, Pythagoras had a broad knowledge encompassing medicine, music, cosmology, astronomy, mathematics and others. Finally, his thought made a strong impact on Plato which is seen through his works.

Pythagoras was born on the island of Samos, off the coast of Ionia (Asia Minor). He was born to Pythais (a native of Samos) and Mnesarchus (a merchant from Tyre). As a young man he left his native city for Crotona in Southern Italy, to escape the tyrannical government of Polycrates. Many writers credit him with visits to the sages of Egypt and Babylon before going west; but such visits feature stereotypically in the biographies of many Greek wise men, and are likely more legend than fact.

Upon his migration from Samos to Crotona, Pythagoras established a secret religious society similar to, and possibly influenced by, the earlier Orphism.

Pythagoras undertook a reform of the cultural life of Croton, urging the citizens to follow virtue, and formed a circle of followers around him. Very strict rules of conduct governed this cultural center. He opened his school to men and women students alike. They called themselves the Mathematikoi; a secret society of sorts.

According to Iamblichus, the Pythagoreans followed a structured life of religious teaching, common meals, exercise, reading and philosophical study. We may infer from this that participants required some degree of wealth and leisure to join the inner circle. Music featured as an essential organizing factor of this life because musical harmony was believed to be effective for the harmony of the soul: the disciples would sing hymns to Apollo together regularly; they used the lyre to cure illness of the soul or body; poetry recitations occurred before and after sleep to aid the memory.

The Pythagorean theorem that bears his name was known much earlier in Mesopotamia and Egypt, but no proofs have been discovered before the proofs offered by the Greeks. Whether Pythagoras himself proved this theorem is not known as it was common in the ancient world to credit to a famous teacher the discoveries of his students.

No original texts survive. His thought is preserved in the fragments and quotes by other authors such as Aristotle and Plato.

The Pythagoreans were known for their teachings of the transmigration of souls, and also for their theory that numbers constitute the true nature of things. The doctrine of transmigration of souls is constituted by the following core beliefs: the soul is immortal; the soul migrates from a living thing to another upon its birth and death; the human body is like a prison of the soul, and bodily desires impede the freedom of a soul (“the body is a tomb”). This doctrine led Pythagoreans to a number of prescriptive rules concerning the killing and eating of animals and plants.

They had performed purification rites and followed ascetic, dietary and moral rules that they believed would enable their soul to achieve a higher rank among the gods. Consequentially, they expected they would be set free from the wheel of life. Religious training included: studies of philosophy and mathematics (thereby cultivating the senses of the soul); exercises of music (musical harmony enhancing the balance and harmony of human beings); and physical exercises (training of bodily control).

Number is the first principle, a thing which is undefined, incomprehensible, having in itself all numbers which could reach infinity in amount. And the first principle of numbers is in substance the first monad, which is a male monad, begetting as a father all other numbers. Secondly the dyad is female number, and the same is called by the arithmeticians even. Thirdly the triad is male number; this the arithmeticians have been wont to call odd. Finally the tetrad is a female number, and the same is called even because it is female.

…the first principles are ten, named according to the following table: finite and infinite, even and odd, one and many, right and left, male and female, rest and motion, straight and crooked, light and darkness, good and bad, square and oblong.

All numbers, then, taken by classes are fours (for number is undefined in reference to class), of which is composed the perfect number, the decad. For the series, one two three and four, becomes ten, if its own name is kept in its essence by each of the numbers. Pythagoras said that this sacred tetraktys is 'the spring having the roots of ever-flowing nature in itself,’ and from this numbers have their first principle.

In astronomy, the Pythagoreans were well aware of the periodic numerical relations of the planets, moon, and sun. The celestial spheres of the planets were thought to produce a harmony called the music of the spheres. These ideas, as well as the ideas of the perfect solids, would later be used by Johannes Kepler in his attempt to formulate a model of the solar system in his work Harmonice Mundi {“The Harmony of the Worlds”). Pythagoreans also believed that the earth itself was in motion and that the laws of nature could be derived from pure mathematics. It is believed by modern astronomers that Pythagoras coined the term cosmos, a term implying a universe with orderly movements and events.

While he clearly attached great importance to geometry, classical Greek writers tended to cite Thales as the great pioneer of this science rather than Pythagoras. The later tradition of Pythagoras as the inventor of mathematics stems largely from the Roman period.

Whether or not the Pythagorean theorem should be attributed to Pythagoras, it seems fairly certain that he had the pioneering insight into the numerical ratios which determine the musical scale, since this plays a key role in many other areas of the Pythagorean tradition, and since no evidence remains of earlier Greek or Egyptian musical theories. Another important discovery of this school—which upset Greek mathematics, as well as the Pythagoreans' own belief that whole numbers and their ratios could account for geometrical properties — was the incommensurability of the diagonal of a square with its side. This result showed the existence of irrational numbers.

Retrieved from https://www.newworldencyclopedia.org/p/index.php?title=Pythagoras_and_Pythagoreans&oldid=1090776
Categories:
Hidden category:
This page was last edited on 7 December 2022, at 03:55.
Content is available under Creative Commons Attribution/Share-Alike License; additional terms may apply. See Terms of Use for details.