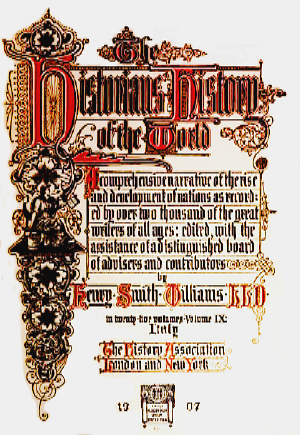 Title page of The Historians' History of the World.

Political history is the narrative and analysis of political events, ideas, movements, and leaders.[1] It is usually structured around the nation-state, and is distinct from, but related to, other fields of history such as social history, economic history, and military history. Generally, political history focuses on events relating to nation-states and the formal political process. According to Hegel, political history "is an idea of the state with a moral and spiritual force beyond the material interests of its subjects: It followed that the state was the main agent of historical change." This contrasts for instance with social history, which focuses predominantly on the actions and lifestyles of ordinary people,[2] or people's history, which is historical work from the perspective of common, non-elite people.

The development, alongside political history, of historical reconstructions that aim to express the views of those whose voices are not heard in top-down historical reconstruction serves to stress that all history is written from somebody's perspective. The way in which the history of nations is written usually serves to justify, excuse or sometimes to censure how their leaders have acted. The latter is especially true if a change in leadership has occurred, sometimes after a disastrous event. In order to construct a fuller, more complete picture of human development, a variety of approaches is needed. A value-based analysis of history concerned with the lessons that can be learned and with how decisions made by elites impacted for good or for ill on the lives of non-elites has to rise to the challenge of identifying a wide variety of voices and finding sources that have habitually been forgotten, deliberately set aside or even suppressed.

For those who posit that history has a providential purpose, the possibility that God works through the lives of non-elites who yet contribute significantly to their immediate societies, improving people's lives, must always remain open. Political history is often a narrative of battles, of nations defeating nations, of the triumph of generals, and of the kings and politicians who ordered them to war. By placing the lives of non-elites alongside those of generals, rulers and leaders of nations, other achievements in fields that enrich human life also become the stuff of history.

Diplomatic history focuses on politics, politicians and other rulers and views them as being the driving force of continuity and change in history. This type of political history is the study of the conduct of international relations between states or across state boundaries over time. This is the most common form of history and is often the classical and popular belief of what history should be. The makers and movers of diplomatic history are heads of state or of government and their representatives.

Diplomatic history is the past aggregate of the art and practice of conducting negotiations between accredited persons representing groups or nations occurring in succession. Events lead from the past to the present and even into the future. Diplomatic history records or narrates events relating to or characteristic of diplomacy such as the conduct of state relations through the intercession of individuals with regard to issues of peace-making, culture, economics, trade, and war.

From the 1970s onwards, new movements sought to challenge traditional approaches to political history. The development of social history and women's history shifted the emphasis away from the study of leaders and national decisions, and towards the role of ordinary citizens; "…by the 1970s 'the new social history' began replacing the older style. Emphasis shifted to a broader spectrum of … life, including such topics as the history of urban life, public health, ethnicity, the media, and poverty."[5] As such, political history is sometimes seen as the more "traditional" kind of history, in contrast with the more 'modern' approaches of other fields of history.

Although much of existing written history might be classified as diplomatic history—Thucydides, certainly, is among other things, highly concerned with the relations among states—the modern form of diplomatic history was codified in the nineteenth century by Leopold von Ranke, a German historian. Ranke wrote largely on the history of Early Modern Europe, using the diplomatic archives of the European powers (particularly the Venetians) to construct a detailed understanding of the history of Europe wie es eigentlich gewesen ("as it actually happened"). Ranke saw diplomatic history as the most important kind of history to write because of his idea of the "Primacy of Foreign Affairs" (Primat der Aussenpolitik), arguing that the concerns of international relations drive the internal development of the state. Ranke's understanding of diplomatic history relied on the large number of official documents produced by modern western governments as sources.

Ranke's understanding of the dominance of foreign policy, and hence an emphasis on diplomatic history, remained the dominant paradigm in historical writing through the first half of the twentieth century. This emphasis, combined with the effects of the War Guilt Clause in the Treaty of Versailles (1919) which ended World War I, led to a huge amount of historical writing on the subject of the origins of the war in 1914, with the involved governments printing huge, carefully edited, collections of documents and numerous historians writing multi-volume histories of the origins of the war. In general, the early works in this vein, including Fritz Fischer's controversial (at the time) 1961 thesis that German goals of "world power" were the principal cause of the war, fit fairly comfortably into Ranke's emphasis on Aussenpolitik.

In the course of the 1960s, however, some German historians (notably Hans-Ulrich Wehler and his cohort) began to rebel against this idea, instead suggesting a "Primacy of Domestic Politics" (Primat der Innenpolitik), in which the insecurities of (in this case German) domestic policy drove the creation of foreign policy. This led to a considerable body of work interpreting the domestic policies of various states and the ways this influenced their conduct of foreign policy.

At the same time, the middle of the twentieth century began to see a general de-emphasis on diplomatic history. The French Annales school had already put an emphasis on the role of geography and economics on history, and of the importance of broad, slow cycles rather than the constant apparent movement of the "history of events" of high politics. The most important work of the Annales school, Fernand Braudel's The Mediterranean and the Mediterranean World in the Age of Philip II,[6] contains a traditional Rankean diplomatic history of Philip II's Mediterranean policy, but only as the third and shortest section of a work largely focusing on the broad cycles of history in the longue durée ("long term"). Braduel drew on sociology, anthropology, geography, and on other disciplines to study world history. The Annales were broadly influential, leading to a turning away from diplomatic and other forms of political history towards an emphasis on broader trends of economic and environmental change.[7]

In the 1960s and 1970s, an increasing emphasis on giving a voice to the voiceless and writing the history of the underclass, whether by using the quantitative statistical methods of social history or the more qualitative assessments of cultural history, also undermined the centrality of diplomatic history to the historical discipline. Most history is written from somebody's point of view. In telling the story of their nations and leaders, historians tend to shed as positive a light on events as possible, offering excuses for mistakes. The same event narrated by a writer from opposing sides of a battle or struggles may emphasize different aspects depending on what they regard as in the interest of their own state. The voices of political dissent are also often ignored or given a negative, critical gloss. Marxist history to some degree uncovers the voices of non-elites by focusing on the role that class and class conflict plays in the evolution of social institutions positing a dialectic that moves society towards communism.

The challenge of giving voice to the voiceless requires finding these hidden, lost, or silenced voices, that is, using alternative accounts than those written by the movers and shakers of history. Edward Said and others have also pointed out how, in writing the histories of the colonized, the colonizers allowed attitudes of racial and cultural superiority to color how they depicted others. The writers of these histories and other accounts were often former colonial administrators, with a vested interest in giving moral justification to the whole imperial project. The subaltern was rarely pictures as capable of self-governance.[8]

Diplomatic history has always remained a historical field with a great interest to the general public, and considerable amounts of work are still done in the field, often in much the same way that Ranke pioneered in the middle years of the nineteenth century. The widening of historical research to include the contributions of non-elites also fleshes the content of history with achievements in the field of culture, education, medical advancement and other life-enhancing spheres. The endless wars, battles and armed revolutions that too often constitute history give the impression that human life is mainly about violence. By placing non-violent cultural, artistic, technological and other achievements alongside battles, conquest, war, and revolution, people may develop an understanding that what merits praise in history and is that which preserves life, not what ends it.