A planarian is any flatworm (phylum Platyhelminthes) of the suborder (or order) Tricladida of the class Turbellaria. Primarily free-living, planarians are characterized by a soft, broad, leaf-shaped (when elongated) body with cilia and a three-branched digestive tract (as reflected in the name Tricladida).

Planarians or triclads are widely distributed, common, and diverse. While chiefly found in freshwater ecosystems, they also can be found in marine and terrestrial environments.

The term "planarian" is most often used as a common name for any member of Tricladida, while "planaria" is the name of one genus within the family Planariidae. There are several families of planarians within Tricladida.

Planarians are common organisms for scientific research and classroom teaching. Their ability to regenerate body parts and to reproduce asexually adds to research interest in them. Carranza et al. (1998) note that planarians are probably the best known of the free-living platyhelminthes, largely because of intensive research related to cellular regeneration, pattern formation, and Hox gene expression.

Some planarians have achieved pest status as a result of being invasive species.

Planarians are globally distributed and common to many parts of the world, residing in freshwater ponds and rivers. They are also found residing on plants or in marine environments.

Planarians range in size from about 3 to 12 mm. The head has two eyespots (also known as ocelli) that can detect the intensity of light. The eyespots act as photoreceptors and are used to move away from light sources. The head may also have tentacles. The tail is typically pointed.

As with all flatworms, planarians have three germ layers (ectoderm, mesoderm, and endoderm), but lack a true coelom (body cavity).

Planarians have simple organ systems and lack respiratory and circulatory systems. They have a single-opening digestive tract with a three-branched digestive cavity, consisting of one anterior branch and two posterior branches. 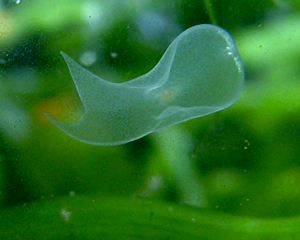 Planarian on the glass of an aquarium.

The digestive system consists of a mouth, pharynx, and an intestine. The mouth is located in the center of the underside of the body, often halfway or more toward the tail. Digestive enzymes secrete from the mouth to begin external digestion. The pharynx connects the mouth to the intestines. The intestines of the planarian branch throughout the body. They eat living or dead small animals that they suck with their muscular mouth. From there, the food passes through the pharynx into the intestines and digesting of the food takes place in the cells lining the intestine, which then diffuses to the rest of the body.

Planarians receive oxygen and release carbon dioxide by diffusion. The excretory system is made of many tubes with many flame cells and excretory pores on them. Flame cells remove unwanted liquids from the body by passing them through ducts that lead to excretory pores where the waste is released on the dorsal surface of the planarian.

There is a basic nervous system. At the head of the planarian there is a brain under the eyespots. From the brain, there are two nerve cords, which connect at the tail. There are many transverse nerves connected to the nerve cords, which make it look like a ladder. With a ladder-like nerve system it is able to respond in a coordinated manner.

Planarians can also reproduce by regeneration. If a planarian is cut into two halves, lengthwise or crosswise, both halves may become two new planaria (regeneration). In one experiment, T. H. Morgan found that a piece corresponding to 1⁄ 279th of a planarian could successfully regenerate into a new worm. This size (about 10,000 cells) is typically accepted as the smallest fragment that can regrow into a new planarian.

Planarians move by beating cilia on the ventral surface, allowing it to glide along on a film of mucus. Some move by undulations of the whole body by the contractions of muscles built into the body wall.

The most frequently used planarians in high schools and first-year college laboratories are the brownish Dugesia tigrina. Other common varieties are the blackish Planaria maculata and Dugesia dorotocephala. Recently, however, the species Schmidtea mediterranea has emerged as the species of choice for modern molecular biological and genomic research due to its diploid chromosomes and existence in both asexual and sexual strains. Recent genetic screens utilizing double-stranded RNA technology have uncovered 240 genes that affect regeneration in S. mediterranea. Interestingly, many of these genes are found in the human genome.