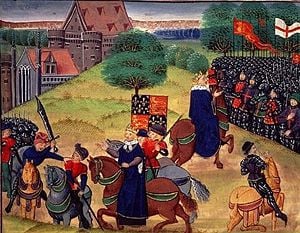 The end of the revolt: Wat Tyler killed by Walworth while Richard II watches, and a second image of Richard addressing the crowd

The Peasants' Revolt, Tyler’s Rebellion, or the Great Rising of 1381, was one of a number of popular revolts in late medieval Europe and is a major event in the history of England. The names of some of its leaders, John Ball (priest), Wat Tyler, and Jack Straw (rebel leader), are still familiar even though very little is actually known about these individuals. One cause of the Revolt was the Black Death, during which nobility and peasants alike suffered and died, resulting in the latter questioning why they should be subject to the almost absolute authority of the former. Some interpret the revolt as an early example of class consciousness and of the struggle between the proletariat and the Bourgeoisie. A new realization of the value of their labor and an unwillingness to be exploited lay behind the revolt. Some supporters were members of the Lollard movement, which, inspired by John Wycliffe who translated the Bible into English, taught that anyone who was godly and pious could celebrate the Mass, or Lord's Supper, whether they were lay or ordained.

Events leading to the revolt

The revolt was precipitated by heavy-handed attempts to enforce the third poll tax, first levied in 1377, supposedly to finance military campaigns overseas—a continuation of the Hundred Years' War initiated by King Edward III of England. The third poll tax, unlike the earlier two, was not levied on a flat rate basis (as in 1377) nor according to schedule (as in 1379), but in a manner that appeared more arbitrary and, hence, unfair. Equally unfair, and a longer-term factor, was the way the Statute of Laborers of 1351, was enforced. The Black Death, which ravaged England in 1348 and 1349, killing millions, had greatly reduced the labor force, and as a consequence, laborers were able to demand enhanced terms and conditions. The Statute attempted to curb this by pegging wages and restricting the mobility of labor, but the probable effect was that laborers employed by lords were effectively exempted, but laborers working for other employers, both artisans and more substantial peasants, were liable to be fined or held in the stocks.

In June 1381, two groups of common people from the southeastern counties of Kent and Essex marched on London. The most vociferous of their leaders, Walter, or "Wat," Tyler, was at the head of a contingent from Kent. When the rebels arrived in Blackheath, London, on June 12, the renegade Lollard priest, John Ball, preached a sermon including the famous question that has echoed down the centuries: "When Adam delved and Eve span, who was then the gentleman?" The following day the rebels, encouraged by the sermon, crossed London Bridge into the heart of the city. Meanwhile the "Men of Essex" had gathered with Jack Straw at Great Baddow and had marched on London, arriving at Stepney. Instead of what was expected of a riot however, there was only a systematic attack on certain properties, many of them associated with John of Gaunt and/or the Knights of Hospitaller Order. On June 14, they are reputed to have been met by the young king himself, and to have presented him with a series of demands, including the dismissal of some of his more unpopular ministers and the effective abolition of serfdom. One of the more intriguing demands of the peasants was "that there should be no law within the realm save the law of Winchester." This is often said to refer to the statutes of the Charter of Winchester (1251), though it is sometimes considered to be a reference to the more equitable days of King Alfred the Great, when Winchester was the capital of England.

Storming the Tower of London 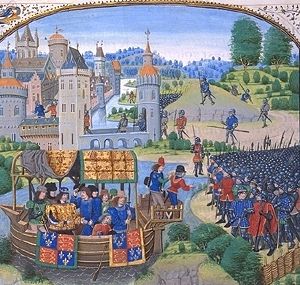 At the same time, a group of rebels stormed the Tower of London—after likely being let in—and summarily executed those hiding there, including the Lord Chancellor (Simon of Sudbury, the Archbishop of Canterbury, who was particularly associated with the poll tax), and the Lord Treasurer (Robert de Hales, the Grand Prior of the Knights Hospitallers of England). The Savoy Palace of the king's uncle, John of Gaunt, was one of the London buildings destroyed by the rioters. Richard II of England agreed to reforms such as fair rents, and the abolition of serfdom.

At Smithfield, London, on the following day, further negotiations with the king were arranged, but on this occasion the meeting did not go according to plan. Wat Tyler left his army and rode forth to negotiate with the King and his party. Tyler, it is alleged by his killers, behaved most belligerently and dismounted his horse and called for a drink most rudely. In the ensuing dispute Tyler drew his dagger and William Walworth, the Mayor of London drew his sword and attacked Tyler, mortally wounding him in the neck. Seeing him surrounded by the King's entourage, the Rebel Army was in uproar, but King Richard, seizing the opportunity, rode forth and promised the Rebels all was well, that Tyler had been knighted, and their demands would be met—they were to March to St John's Fields, where Wat Tyler would meet them. This they duly did, but the King was lying, the Nobles re-established their control with the help of a hastily organized militia of 7000, and most of the other leaders were pursued, captured, and executed, including John Ball. Jack Straw turned on his associates under torture and betrayed many of them to the executioner—though it did not save him. Following the collapse of the revolt, the king's concessions were quickly revoked, and the tax was levied.

Despite its name, participation in the Peasants' Revolt was not confined to serfs or even to the lower classes. Although the most significant events took place in the capital, there were violent encounters throughout eastern England—but those involved hastened to dissociate themselves in the months that followed.

John Gower, friend of Geoffrey Chaucer, saw the peasants as unjustified in their cause. In his Vox Clamantis, he sees the peasant action as the work of the Anti-Christ and a sign of evil prevailing over virtue.

Geoffrey Chaucer mentions Jack Straw, one of the leaders of the Revolt, in his satiric "The Nun's Priest's Tale" of The Canterbury Tales.

William Morris described the revolt in A Dream of John Ball (1888).

In the book Born in Blood: The Lost Secrets of Freemasonry (1990) author John J. Robinson (not a professional historian), combines scholarly research with entertaining storytelling to make the case that the leadership of the revolt was somehow involved with the disbanded Knights Templar, and makes broad correlations throughout his book to Freemasonry and the Templar Order. These claims are unique to Robinson and are warily received by professional scholars of the period.