Panokseon ("board roofed" or "superstructured" ship) was an oar and sail-propelled ship that served as the main class of warship used by the Korean Joseon Dynasty during the late sixteenth century. The Joseon court constructed the first ship of this class in 1555.[1] Constructed of sturdy pine wood, the Panokseon proved instrumental in the victories over the numerically superior Japanese Navy during the Imjin War, beginning in 1592. Admiral Yi Sunsin (1545-1598) of the Joseon Navy employed them alongside turtle ships during the war with great success.

Multiple decks constituted a key feature of a Panokseon. The first deck had non-combatant personnel, such as the rowers, positioned between the main-deck and the upper-deck, away from enemy fire. Stationing the combatant personnel on the upper-deck allowed them to attack the enemy from a higher vantage point. The commander stood on a raised, roofed observation platform on the deck of the Panokseon.

The Panokseon proved one of the deciding factors in Korea's defeat of the Japanese fleet and the failure of their invasion. Although Japan carried out a scorched earth policy in Korea, inflicting immense suffering and devastation, the Panokseon played a key role in forcing Japan's retreat. The Japanese Navy proved no match to the Panokseon, which were complimented by turtle ships and Admiral Yi Sunsin's leadership.

In line with the traditional structure of Korean ships, Panokseon had a flat base. That feature resulted from the nature of the Korean seacoast, which had a broad tidal range and flat, expansive tidelands. A level underside enabled a ship to sit comfortably on the tideland with the tide out, after coming ashore or inside a wharf at high water. The flat base ensured greater mobility, a light draft and, in particular, allowed a ship to make sharp changes of direction at short notice. The Panokseon stood out as one of the main reasons why Admiral Yi employed the Crane Wing formation at the Battle of Hansando, with great success. 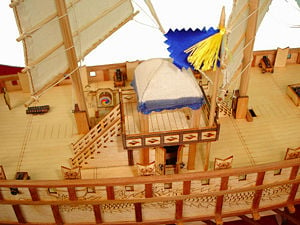 A model of Panokseon centering on the commander deck.

Both sails and oars propelled Panokseons. Of the two basic types of sail, square and lateen, the square gives a strong performance downwind but struggles windward, whereas the fore-and-aft lateen sail excels against the wind, though requiring a large crew to handle it. In the West, the galleys of Ancient Greece and the Viking longships, and the fore-and-aft variety found later in the Mediterranean ships of the Late Middle Ages, used square sails. When the Age of Exploration began in the fifteenth century, multiple-masted ships equipped with both types of sails eventually appeared. In Korea, fore-and-aft sail equipped ships had been in use since the eighth century. Korea’s Panokseon and Kobukson had two masts as standard, their position and angle easily managed, enabling the sails' use in all winds, whether adverse or favorable.

The ships had two to three levels stacked up on top of each other. By having multiple levels, the rowers at the bottom worked in relative safety, while marines at the top had a height advantage over the enemy, firing down upon them, thus avoiding boarding of the ship. The upper deck had a tower in the middle of the ship that the ship's captain used for command and observation. The broad and flat deck of the Panokseon made it ideal for the hosting of cannons. Panokseons came in different sizes from a medium, seventy feet in length, version to a large, 100 to 120 feet in length, vessel. The ship usually had eight to ten oars on each side, fifty to sixty oarsman and sailors, and another 125 marines (i.e. fighting men).

Because of the rough waters around Korea's coast, as well as the sudden changes in tides and currents, Koreans constructed their boats throughout history emphasizing strength. Korean ship building tradition created simple, but exceptionally structurally sound vessels. Throughout Korea's naval history, commanders emphasized strength and power over speed.

Naval architects used two types of woods to construct Panokseon: Pine for the hull and oak for the pegs and masts. Oak, a strong and heavy wood, had limited use. Pine, also strong, but much lighter, had a wider use. Builders usually allowed the pine to season incompletely so that they could bend it easily while avoiding stiffness. Despite its advantages, pine had disadvantages. The wood had many knots, and had to be cut thickly, requiring the builders to use thicker timbers in the Panokseon. Instead of using iron nails, builders constructed the Panokseons using bamboo pegs, matching indentations, and interlocking teeth. That required boards to absorb water and expand the fasteners, thus accounting for greater integrity of the hull.

Panokseons had on board several varieties of cannon, such as those named Heaven, Earth, and Black and Yellow. Heaven, the largest cannon with the greatest range, accounted for the majority of cannons on the ships. Earth, a smaller cannon, and Black and Yellow, measured even smaller still. The Heaven cannon fired daejon (a long, thick arrow in the shape of a rocket) with a range of 500 m (1,650 ft), as well as chulwhan (cannon shot) which traveled to a distance of 1 km (3300 ft). The Korean Navy also used wangu, a kind of mortar, firing stones or shells with a radius of 20cm (7.8 in).

Another noteworthy aspect was Korea’s heavy fire-arms, most of which had been invented and constructed during peace time. Those weapons made their appearance some 200 years prior to Hideyoshi's invasions of Korea, early in the history of the Joseon Dynasty. Thanks to the efforts of Choe Mu-seon, a general and a chemist, Korea began manufacturing and developing gunpowder and power-based weapons. Korean cannons first saw action in 1380, against a large fleet of Japanese pirate ships, proving a great success.

In the fifteenth century, under the lead of King Sejong, also a pioneer of scientific research, the performance of Korean heavy artillery improved dramatically. Having built a cannon range next to the Royal Court, and after much experimentation and study, King Sejong finally increased the extent of the cannons’ firepower from 300 m (980 ft) to 1000 m (3,100 ft). Sejong's court also developed naval cannons including Heaven, Earth, and Black and Yellow cannons, employed by Yi Sun-sin in the late 1500s. The development of artillery steadily continued after King Sejong, including the invention of the Bikeokjinchonlae, a timed grenade that flung out hundreds of metal shards upon explosion, and the Dapoki, a machine capable of firing many arrows at once. During Hideyoshi's invasions of Korea, Korea lacked advanced muskets, but had several types of powerful cannons.

The Panokseon differed from the Japanese warships significantly, the large Atakebune class and the medium Sekibune class ships most comparably. The hulls of the Japanese vessels had V-shaped bows, a sharp underside favorable for swift or long-distance travel in the open seas because of lower water resistance. Since that variety of hull had a deep draft, the ship had a large turning radius and changing direction required time. Japanese ships thus proved vastly less maneuverable than Panokseon in Korea's narrow channel waters.

The medium sized Sekibune ships, smaller craft, and most Japanese transport ships had a single mast that only sailed in favorable winds. The Atake, an exception with two masts, had the main parts of its vessels square-rigged and their sails again limited to use in favorable winds.

Comparing the hulls of the two nations’ respective warships, and their relative strength, provides insights into their battle worthiness. The Panokseon used thick, high density boards, giving an overall sturdiness to the ship’s structure. Japanese warships proved weaker due to the thin, lower density timber used to build them. Japanese ships were made out of light weight cedar and fir because they had fewer knots than pine and could be cut thinner. The Japanese naval architects built the Sekibune, the standard warship of the Japanese fleet, as light as possible to increase its speed, but at the expense of structural integrity.

The use of iron nails vs. the use of wood pegs to hold the ship together stood out as another major difference. As previously mentioned, ship builders held together Korean ships by interlocking teeth in the wood and wood pegs. The Japanese warships, on the other hand, relied on iron nails which, as time passed and corrosion and rust set in, eventually weakened the hull. That difference in structural integrity also determined the number of cannons that could be carried on board. Because the Japanese ships lacked the strength to withstand the recoil of cannon, even the largest ship, Atake, could carry only three or four at the most. A Sekibune could only carry one. A Panokseon could carry at least ten cannons, but usually carried more. With strong hulls, the Korean warships carried a large number of long-range cannons. Those installed with ease on the large upper-deck of Panokseon ships, and their angle configured at will to increase the range. Since the Japanese warships carried few cannons, their sailors mainly used muskets with a range of 100-200 m (330-660 ft). With that musket range, Japanese naval commanders had confidence that a volley of musket bullets would clear the enemy ships, allowing for the grapple and boarding method described below.

The Japanese employed the traditional "grapple-and-board" as their main naval strategy. Sailors boarded an enemy ship aiming to overcome the enemy with sword fighting on the decks. Japanese soldiers excelled at hand to hand combat, making the strategy attractive for Japanese commanders. They aimed to turn naval combat into a fight between crews rather than the vessels themselves. That strategy held sway with the majority of navies in the world at the time, as common among the Europeans as Asian navies. The Korean Navy, utilizing superior warships and firepower to burn and sink the enemy vessels, engaged in a unique type of naval warfare for the period. During Hideyoshi's invasions of Korea, Admiral Yi Sunsin destroyed Japan's transport ships by use of the superior Panokseon and Turtle ship coupled with knowledge of the waters off the Korean coast.

Retrieved from https://www.newworldencyclopedia.org/p/index.php?title=Panokseon&oldid=986976
Categories:
Hidden category:
This page was last edited on 19 March 2015, at 16:16.
Content is available under Creative Commons Attribution/Share-Alike License; additional terms may apply. See Terms of Use for details.