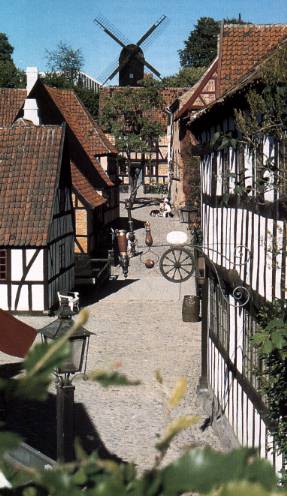 The Old Town—an open air museum in the city of Aarhus, Denmark

An open air museum is a distinct type of museum that exhibits its collections outside. The first open air museums were established in Scandinavia towards the end of the nineteenth century, and the concept soon spread throughout Europe, North America, and all over the world, along with the development of transportation and tourism. Open air museums are variously known as skansen, museums of buildings, living farm museums, living history museum, and folk museums.

Similar cultural exhibitions, such as folk villages, have become popular at historical sites as tourist attractions. Other open air museums focus on specific items that are too large to preserve indoors; ships, railroads, and others. Some, such as the ecomuseum, have a thematic focus.

Today, there are a variety of open air museums: Traditional, research-based institutions, entertainment centers, tourist attractions, and others. Furthermore, while some focus on exhibiting their collections, others focus on interactive, experiential education. Many museums offer in depth background information about their collections on their websites where visitors can learn more about the exhibits. Because these facilities are popular tourist attractions, they are often places where families and people who seldom visit regular museums can visit and learn about a social, cultural and spiritual history of a tradition. Furthermore, open air museums can help to raise awareness about tribal or local cultures and help preserve their traditions. Furthermore, the popularity of these museums perhaps indicates the value people place on history and diversity in an age of rapid modernization and globalization. 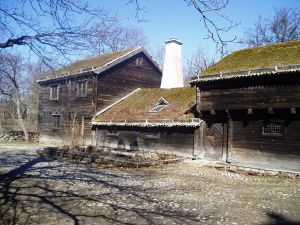 The International Council of Museums (ICOM) defines a museum as "a non-profit making, permanent institution in the service of society and of its development, open to the public, which acquires, conserves, researches, communicates and exhibits, for purposes of study, education and enjoyment, the tangible and intangible evidence of people and their environment."[1] Most open air museums specialize in the collection and re-erection of old buildings at large outdoor sites, usually in settings of recreated landscapes of the past. Most of them may, therefore, justly be described as building museums. Open air museums tended to be located originally in regions where wooden architecture prevailed, as wooden structures may be trans-located without substantial loss of authenticity.

Common to all open air museums, including the earliest ones of the nineteenth century, is the teaching of the history of everyday living by people from all segments of society.

The earliest open air museum appeared in Scandinavia in the late nineteenth century. One reason may be the ancient tradition of moving and re-erecting wooden buildings, based on the local log building technique. The idea was a predictable further development of the by then well-established indoor type of museum. In order to collect and display whole buildings, it would have to be done outdoors. Precursors of open air museums were the "exotic" pavilions, "antique" temples, "ancient ruins," and "peasant cottages" to be found in eighteenth century landscape parks. Later precursors were the real or constructed peasant cottages shown at the international exhibitions of the mid to late nineteenth century.

The world's first open air museum was King Oscar II's collection near Oslo in Norway, opened in 1881. The original plans comprised eight or ten buildings intended to show the evolution of traditional Norwegian building types since the middle ages. Only five were realized before the king lost interest because of the expenses involved. The royal open air museum was later incorporated into the Norsk Folkemuseum, established on an adjacent property in the 1890s. Influenced by a visit to the Norwegian open air museum, Artur Hazelius, in 1891, founded the famous Skansen in Stockholm, which became the model for subsequent open air museums in Northern and Eastern Europe, and eventually in other parts of the world. The name "skansen" has also been used as a noun to refer to other open air museums and collections of historic structures, particularly in Central and Eastern Europe.

Around 1900, national and regional open air museums were established in all Scandinavian countries, notably in Norway and Sweden.

There are also museums focused on architectures during a particular period of history. For example, Meiji Mura (Meiji village) Japan is this type. While its focus is architecture, it exhibits furnitures and other items of interests for the Meiji period (1867-1912).

The Old Town in Aarhus, Denmark, is an open air village museum consisting of 75 historical buildings collected from 20 townships in all parts of the country. In 1914, the museum opened for the first time as the world's first open-air museum of its kind and till this day it remains one of just a few top rated Danish museums outside Copenhagen serving some 3.5 million visitors per year.

The museum buildings are organized into a small village of chiefly half-timbered structures originally erected between 1550 and the late 1800s in various parts of the country and later moved to Aarhus during the 1900s. In all there are some 27 rooms, chambers or kitchens, 34 workshops, ten groceries or shops, five historical gardens, a post office, a customs office, a school, and a theater.

The village itself is the main attraction but most buildings are open for visitors; rooms are either decorated in the original historical style or organized into larger exhibits of which there are 5 regular with varying themes. There are several groceries, diners, and workshops spread throughout the village with museum staff working in the roles of typical village figures, such as a merchant, blacksmith, and so on, adding to the illusion of a "living" village.

Meiji Mura (博物館明治村, Hakubutsukan Meiji-mura, lit: "Meiji village" museum) is an open-air architectural museum/theme park in Inuyama, near Nagoya in Aichi prefecture, Japan. It was opened on March 18, 1965. The museum preserves historic buildings from Japan's Meiji (1867-1912), Taisho (1912-1926), and early Showa (1926-1989) periods. Over 60 historical buildings have been moved and reconstructed onto 1 km² (247 acres) of rolling hills alongside Lake Iruka. The most noteworthy building there is the reconstructed main entrance and lobby of Frank Lloyd Wright's landmark Imperial Hotel, which originally stood in Tokyo from 1923 to 1967, when the main structure was demolished to make way for a new, larger version of the hotel.[2] 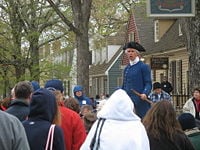 A picture taken of a reenactment of the events leading up to the Revolutionary War. Taken in Colonial Williamsburg outside of the Raleigh Tavern.

The North American open air museum, more commonly called a living history museum, had a different, slightly later origin than the European, and the visitor experience is different. The first was Henry Ford's Greenfield Village in Dearborn, Michigan (1928), where Ford intended his collection to be "a pocket edition of America."[3] But it was Colonial Williamsburg (opened in 1934) which had a greater influence on museum development in North America. It influenced such projects through the continent as Mystic Seaport, Plimoth Plantation, and Fortress Louisbourg. What tends to differentiate the North American from the European model is the approach to interpretation. In Europe, the tendency is to usually, but not always, focus on the building.

In North America, the open air museums invariably include interpreters who dress in period costume and conduct period crafts and everyday work.[4] The living museum is, therefore, viewed as an attempt to recreate to the fullest extent conditions of a culture, natural environment, or historical period. The objective is total immersion, using exhibits so that visitors can experience the specific culture, environment or historical period using all the physical senses. Performance and historiographic practices at American living museums have been critiqued in the past several years by some scholars in anthropology and theater for creating false senses of authenticity and accuracy, and for neglecting to bear witness to some of the darker aspects of the American past (for example, slavery and other forms of injustice). Even before such critiques were published, sites such as Williamsburg and others had begun to add more interpretation of difficult history to keep balance and accuracy.[5] Nevertheless, these open air museums or folk villages are popular tourist attractions.

Other types of open air museum

The idea of open museum is also found in various forms today. One is a theme park or cultural village or folk village type. This type of museum adds more entertainment components to a museum which makes it attractive and enjoyable for visitors of all ages.

Some museums focus on particular subjects, such as ships or trains. For example, Mystic Seaport: The Museum of America and the Sea, in Mystic, Connecticut, U.S., is a maritime museum displaying various types of ships along the banks of the Mystic River.

Open air museum are created at numerous places today in various types and styles. Due to the developments of transportation and communication, they are developing at various places in the world. They combine cultural education and entertainments in varying degrees and make the forgotten tribal traditions and old historical facilities to well preserved cultural center. 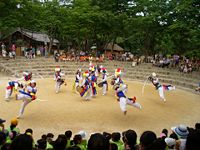 A performance of the farmers' dance at Korean Folk Village

The Korean Folk Village is a living museum type of tourist attraction in the city of Yongin, a satellite city in the Seoul Metropolitan Area in the province of Gyeonggi in South Korea.

The purpose of Korean Folk Village is to display elements of traditional Korean life and culture. There are multiple sections to the park. There are numerous replicas of traditional houses of the different social classes (peasant, landowner, yangban) and the various regions.

The park also has a traditional street market, restaurants, and showcases of traditional wordworking and metalworking techniques. There are performances of traditional dances, equestrian skills, marriage ceremonies, and recreational activities.

An amusement park section has rides and games, an art museum, a sculpture garden, a Korean Folk Museum, and a World Folk Museum which highlights traditional lifestyles from around the world. 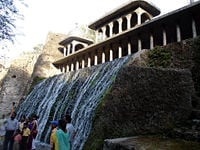 The Rock Garden is a sculpture garden in Chandigarh, India. Spread over an area of forty-acres (160,000 m²), it is completely built of industrial and home waste and thrown-away items. It consists of man-made interlinked waterfalls and many other sculptures that have been made of scrap & other kinds of wastes (bottles, glasses, bangles, tiles, ceramic pots, sinks, electrical waste, and so on) which are placed in walled paths.

The Rock Garden project was secretly initiated by Nek Chand around 1957. It was discovered by the authorities in 1975, by which time it had grown into a twelve-acre complex of interlinked courtyards, each filled with hundreds of pottery-covered concrete sculptures of dancers, musicians, and animals. The authorities took over, and the garden was inaugurated as a public space in 1976. It is presently run by the Rock Garden Society.

This creation has even appeared on the Indian stamp in the year 1983.

The layout of the Garden is based on the fantasy of a lost kingdom. One has to pass through a variety of doorways, archways, vestibules, streets and lanes of different scales and dimensions, each one opening into a new array of displays or courtyards and chambers lending an air of suspense and curiosity at every corner. During the Teej Festival, the Garden assumes a festive look, holding a special attraction for tourists. As one strolls through the Garden, enjoying the awe inspiring creation, one may find himself face to face with the unassuming artist Nek Chand himself, working at or supervising his "kingdom."

There are numerous open air museums. Only a few examples are listed here.