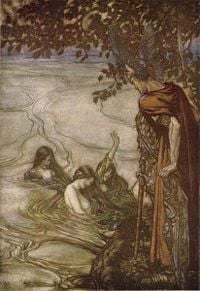 The Rhine maidens and Sigfried, by Arthur Rackham.

The Nix (Nixie plural) is the most popular term for the shapeshifting water spirits of Germanic and Nordic folklore. Often times these mythical creatures appear as humans, and are sometimes linked with such similar creatures as the Greek Sirens or the European Mermaids; however, more often than not they are closer to nymphs or sprites in both demeanor and appearance.

The Nix may take different forms, but their message is one of warning of impending death by drowning. Water spirits (or deities) the Nixie cannot live happily far from water. They entice their human victims to join them through song or music, luring them into the water from which there is no escape only death. The lesson from the tales of the Nix is clearly to avoid temptation, especially one that is supernaturally attractive, and stay safe on the land that is our home.

The term Nix comes from the Old High German Nichus, which became nickes or niches in Middle High German before finally becoming Nix in Modern German. The term Nicker, more than likely is a variation of both the German variations as well as the Nordic ones: nyker in Old Norwegian, nykur in Icelandic, nok in Danish and finally, Neck in Swedish.[1]

The differences in the terms are subtle. While Nix and its variations translate simply as "water elf," Nicker and its roots are more commonly described as "An imaginary being supposed to live in the water; a water demon, kelpie or river horse." [2]The differences in terms suggestions the more narrowed defined Germanic version of Nix, while the Scandinavian forms of the creature are more broad in scope.

It is difficult to determine the exact origin of the Nix, particularly since it first appears in oral folklore. However, there are a few theories that possess some merit. Many folklorists and anthropologists have noted that water-spirit stories from around the world share such similarities that they may in fact be derivative from a common origin, namely the ancient belief in a water goddess or deity. It was common in ancient Pagan cultures to attribute deities to the forces of nature, water being one of the most significant to human survival. With the advancement of civilization and society, these pagan beliefs were transmuted in the form of local oral tradition; hence the single belief in a water deity became disseminated over different geographical areas. Often times, these beliefs were incorporated into already existing belief structures, and therefore the supreme sea goddess was demoted to a supernatural being of lesser powers, sometimes a trickster or natural spirit. It is possible that the Nix comes from such a process.[3]

Due to the similarities with faeries and nymphs, it is also possible that the Nix shares a common origin with both. Nymphs derived from the Greek belief in nature spirits that not only inhabited certain natural settings (such as woods and lakes), but they were symbiotic with nature and were responsible for its health and well being. Faeries were also considered spirits of nature, but were not so integrally connected to the well being of plants and animals. Often they were supernatural beings that interacted with humans, either for their own amusement or the betterment of humankind. 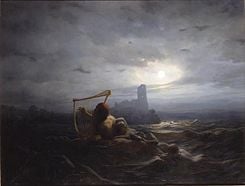 The Scandinavian näcken, nøkken, strömkarlen,[4] Grim or Fosse-Grim were male water spirits who played enchanted songs on the violin, luring women and children to drown in lakes or streams. The enthralling music of the Nix was most dangerous to women and children, especially pregnant women and unbaptized children. They were thought to be most active during Midsummer's Night, on Christmas Eve and on Thursdays. When malicious Nixie attempted to carry off people, they could be defeated by calling their name; this, in fact, would be the death of them. The nix was also an omen for drowning accidents. He would scream at a particular spot in a lake or river, in a way reminiscent of the loon, and on that spot a fatality would later take place.[5]

However, many of these superstitions were developed after the Christianizing of the Northern countries, as were similar stories of faeries and other entities in other areas. Hence, not all of these spirits were necessarily malevolent; in fact, many stories exist that indicate at the very least that Fossegrim were entirely harmless to their audience and attracted not only women and children, but men as well with their sweet songs. Stories also exist wherein the Fossegrim agreed to live with a human who had fallen in love with him, but many of these stories ended with the Fossegrim returning to his home, usually a nearby waterfall or brook. Fossegrim are said to grow despondent if they do not have free, regular contact with a water source. 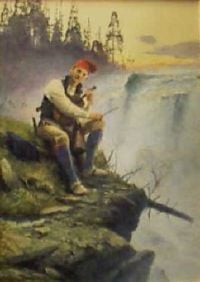 It is difficult to describe the actual appearance of the Nix, as one of its central attributes was thought to be shapeshifting. Perhaps he did not have any true shape. He could show himself as a man playing the violin in brooks and waterfalls (though often imagined as fair and naked today, in actual folklore he was more frequently wearing more or less elegant clothing) but also could appear to be treasure or various floating objects or as an animal—most commonly in the form of a "brook horse." Fossegrim and derivatives were almost always portrayed as especially beautiful young men, whose clothing (or lack thereof) varied widely from story to story. 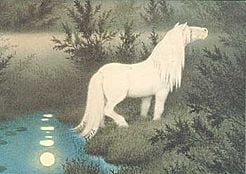 The Nix as a brook horse by Theodor Kittelsen, a depiction of the Nix as a white horse

Bäckahästen (translated as the brook horse) is a mythological horse in Scandinavian folklore. If properly approached, and if you brought the Nix a treat of three drops of blood, a black animal, some brännvin (Scandinavian vodka) or ''snus'' (wet snuff) dropped into the water, he would teach a musician to play so adeptly "that the trees dance and waterfalls stop at his music."[6] It has a close parallel in the Scottish kelpie. It was often described as a majestic white horse that would appear near rivers, particularly during foggy weather. Anyone who climbed onto its back would not be able to get off again. The horse would then jump into the river, drowning the rider. The brook horse could also be harnessed and made to plow, either because it was trying to trick a person or because the person had tricked the horse into it. 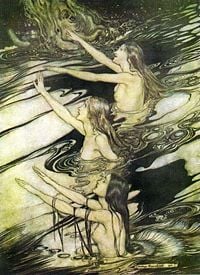 In the nineteenth century, Nixie in Germanic folklore were considered water sprites who tried to lure people into the water. The males could assume many different shapes, including that of a human, fish, or snake. The females were beautiful women with the tail of a fish. When in human forms, they could be recognized by the wet hem of their clothes. The Nixie are considered as malignant in some quarters, but as harmless and friendly in others.[7]

There were many famous Nixie in Germanic folklore. One famous Nix was Lorelei. According to legend, she sat on the rock at the Rhine which now bears her name, and distracted fishermen from the dangers of the reefs with the sound of her voice. In Switzerland there is a legend (myth) of a seamaid or Nix that lived in Lake Zug (the lake is in the Canton of Zug). The legend of Heer Halewijn a dangerous lord who lures women with a magic song to death, may have originated with the Nix.

In a fictional depiction, the Rhine maidens are among the protagonists in the four-part Opera Der Ring des Nibelungen by the composer Richard Wagner, based loosely on the Nix of the Nibelungenlied. The Rhine maidens Wellgunde, Woglinde, and Floßhilde (Flosshilde) belong to a group of characters living in a part of nature free from human influence. Erda and the Norns are also considered a part of this 'hidden' world.

They are first seen in the first work of the Nibelungen cycle, Das Rheingold, as guardians of the Rheingold, a treasure of gold hidden in the Rhein river. The dwarf Alberich, a Nibelung, is eager to win their favor, but they somewhat cruelly dismiss his flattery. They tell him that only one who is unable to love can win the Rheingold. Thus, Alberich curses love and steals the Rheingold. From the stolen gold he forges a ring of power. Further on in the cycle, the Rhine maidens are seen trying to regain the ring and transform it back into the harmless Rheingold. But no one, not even the supreme god Wotan, who uses the ring to pay the giants Fasolt and Fafner for building Valhalla, nor the hero Siegfried, when the maidens appear to him in the third act of Götterdämmerung, will return the ring to them. Eventually Brünnhilde returns it to them at the end of the cycle, when the fires of her funeral pyre cleanse the ring of its curse. 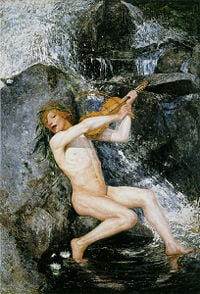 Strömkarlen from 1884 by Ernst Josephson has formed many modern Swedes' view of Näcken. 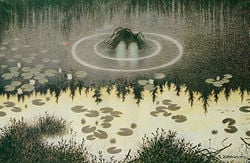 In Norway, Theodor Kittelsen's Nøkken from 1904 is equally famous.

Like other mythological creatures, Nixie have often been depicted by artists. During the Romantic period, faeries and sprites became very popular subject matters, and in Germany and Scandinavia, water spirits were often painted. Moritz von Schwind and Ludwig Schnorr von Carolsfeld were two German artists who painted many depictions of faeries and Nixie. Irish artist Daniel Maclise painted one of the most famous depictions of water spirits, Scene from Undine (1843), which depicted the tribulations of the nix Undine.[8]

Often these depictions focused on the more benevolent form of Nixie, usually emphasizing the beauty and allure of such creatures rather than focusing on their potentially malevolent traits. After the Romantic period, depictions of all faerie-like creatures were less common, but in contemporary times, many artists have once again looked upon such subject material for inspiration. Within the faerie art sub-culture, Nixie are sometimes depicted.

This article incorporates text from the public domain 1907 edition of The Nuttall Encyclopædia.

Retrieved from https://www.newworldencyclopedia.org/p/index.php?title=Nix&oldid=1087553
Categories:
Hidden category:
This page was last edited on 16 November 2022, at 02:30.
Content is available under Creative Commons Attribution/Share-Alike License; additional terms may apply. See Terms of Use for details.