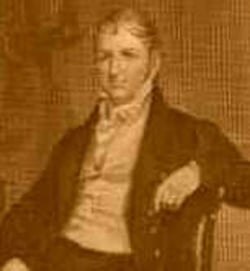 Nicolas-Joseph Cugnot (February 26, 1725 – October 2, 1804) was a French inventor. He is believed to have built the first self-propelled mechanical vehicle or automobile, though this claim is disputed by some sources (some suggest that Ferdinand Verbiest, as a member of a Jesuit mission in China, may have been the first to build a 'car' around 1672.)[1][2]

Employed by the military, his interest was to move cannon more rapidly and with greater ease. He may not have anticipated the domestic, peace time use of the automobile yet his pioneer use of high-pressure steam helped the development of one of the most widely used technologies in the contemporary world. With the exception of the aircraft, itself a by-product of automobile technology, the car has revolutionized human existence. The ability to travel with ease over great distances has knitted large nations together. Isolated rural communities now depend on the car to access services. In regions such as Europe, where within the European Union borders are open, more and more people are developing awareness of a common identity that transcends national citizenship. The ambitions of Cugnot's own employer, Napoleon Bonaparte, included the unification of Europe to prevent war and the use of a common legal code.

Cugnot was born in Void, Lorraine, (now departement of Meuse) France. He first trained as a military engineer. He experimented with working models of steam-engine-powered vehicles for the French Army, intended for transporting cannon, starting in 1765.

Cugnot was one of the first to successfully employ a device for converting the reciprocating motion of a steam piston into rotary motion by means of a ratchet arrangement. A small version of his three-wheeled fardier à vapeur ran in 1769. (A fardier was a massively built two-wheeled horse-drawn cart for transporting very heavy equipment such as cannon barrels).

The following year, a full-size version of the fardier à vapeur was built, specified to be able to handle four tons and cover two lieues (7.8 km or or 4.8 miles) in one hour, in practice, however, it never achieved these specifications. The vehicle weighed about 2.5 metric tons tare. It had two wheels at the rear and one in the front where the horses would normally have been; this front wheel supported the steam boiler and was steered by means of a tiller. In 1771, this second vehicle is said to have gone out of control and knocked down part of a wall, (possibly the first ever automobile accident). However according to Georges Ageon,[3] the earliest mention of this occurrence is in 1801 and it did not feature in contemporary accounts.

The vehicle was reported to have been very unstable due to poor weight distribution which would have been a serious disadvantage seeing that it was intended that the fardier should be able to traverse rough terrain and climb steep hills. Boiler performance was also particularly poor, even by the standards of the day, with the fire needing to be relighted and steam raised again every quarter of an hour or so, considerably reducing overall speed.

After running a small number of trials variously described as being between Paris and Vincennes and at Meudon, the project was abandoned and the French Army's experiment with mechanical vehicles came to an end. Even so in 1772, King Louis XV granted Cugnot a pension of 600 livres a year for his innovative work and the experiment was judged interesting enough for the fardier to be kept at the Arsenal until transferred to the Conservatoire National des Arts et Métiers in 1800, where it can still be seen today. 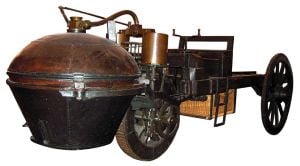 With the French Revolution, Cugnot's pension was withdrawn in 1789, and the inventor went into exile in Brussels, where he lived in poverty. Shortly before his death, he was invited back to France by Napoleon Bonaparte and returned to Paris, where he died on October 2, 1804.

Almost all histories of the automobile cite Cugnot as, quite possibly, its inventor. Certainly, there is a link between his use of high pressured steam and later developments in automobile technology. The invention of the motor-vehicle would impact hugely on life in the twentieth century. Conserva (2001) credit Cugnot with "building the world's first car with mechanical transaction" then writes of how the invention of the automobile, by "putting millions of Americans on the roads" transformed the American way of life "politically, economically and socially."[4] Despite the problems of pollution and those associated with use of non-renewable fuels, the automobile has revolutionized human life. Large nations benefit from better and quicker transportation. More and more people have access to essential services. Cugnot could not have anticipated this but his interests in moving weapons more rapidly has had an endurng and a global impact on human life.

Retrieved from https://www.newworldencyclopedia.org/p/index.php?title=Nicolas-Joseph_Cugnot&oldid=1087398
Categories:
Hidden category:
This page was last edited on 14 November 2022, at 23:34.
Content is available under Creative Commons Attribution/Share-Alike License; additional terms may apply. See Terms of Use for details.