Niccolò (or Nicolò) Paganini (October 27, 1782 – May 27, 1840) was an Italian violinist, violist, guitarist, and composer. He is one of the most famous violin virtuosi, and is considered one of the greatest violinists who ever lived, with perfect intonation and innovative techniques. Although nineteenth century Europe had seen several extraordinary violinists, Paganini was the preeminent violin virtuoso of that century. It was rumored by his contemporaries that he had made a deal with the Devil for his unbelievable ability.

Niccolò Paganini was born in Genoa, Italy, on October 27, 1782, to Antonio and Teresa, née Bocciardo, Paganini. Paganini first learned to play the mandolin from his father at the age of five, moved to the violin by the age of seven, and began composing before he turned eight. He gave his first public concert at the age of 12. In his early teens he studied under various teachers, including Giovanni Servetto and Alessandro Rolla, but he could not cope well with his success; and at the age of 16 he was gambling and drinking. His career was saved by an unknown lady, who took him to her estate where he recovered and studied the violin for three years. He also played the guitar during this time.

He reappeared when he was 23, becoming director of music to Napoleon's sister Elisa Baciocchi, Princess of Lucca, when he wasn't touring. He soon became a legend for his unparalleled mastery of the violin, with debuts in Milan in 1813, Vienna 1828, and both London and Paris in 1831. Paganini was one of the first musicians, if not the first, to tour as a solo artist, without supporting musicians. He became one of the first superstars of public concertizing. He made a fortune as a touring musician, and was uncanny in his ability to charm an audience.

Paganini's signature violin, Il Cannone fabricated in 1742 by Giuseppe Antonio Guarnieri del Gesù, was his favorite. He named it "The Cannon" because of the powerful and explosive resonance he was able to produce from it. Its strings are nearly on the same plane, as opposed to most violins, the strings of which are distinctly arched to prevent accidentally bowing extra strings. The stringing of Il Cannone may have allowed Paganini to play on three or even four strings at once. Il Cannone is now in the possession of the City of Genoa where it is exhibited in the town hall. It is taken out and played by its curator once monthly, and periodically loaned out to virtuosi of today. 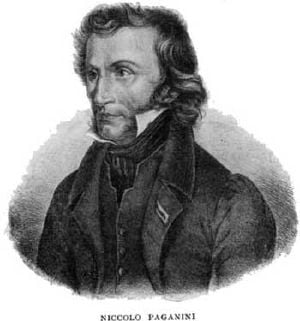 In Paris in 1833, he commissioned a viola concerto from Hector Berlioz, who produced Harold in Italy for him, but Paganini never played it.

His health deteriorated due to mercury poisoning by a mercury compound. Mercury was used to mechanically clear intestinal obstructions (due to its great weight and fluidity) in the early nineteenth century. Because elemental mercury often passes through the GI tract without being absorbed, it was used medically for various purposes until the dangers became known. The disease brought on by mercury poisoning caused Paganini to lose the ability to play violin, and he retired in 1834. He died of throat cancer in Nice May 27, 1840.

The orchestral parts of Paganini's works are polite, unadventurous in scoring, and supportive. Critics of Paganini find his concerti long-winded and formulaic: one fast rondo finale could often be switched for another. During his public career, the violin parts of the concertos were kept secret. Paganini would rehearse his orchestra without ever playing the full violin solos. At his death, only two had been published. Paganini's heirs have cannily released his concertos one at a time, each given their second debut, over many years, at well-spaced intervals. There are now six published Paganini violin concerti (although the last two are missing their orchestral parts). His more intimate compositions for guitar and string instruments, particularly the violin, have yet to become part of the standard repertoire.

Paganini developed the genre of concert variations for solo violin, characteristically taking a simple, apparently naïve theme, and alternating lyrical variations with a ruminative, improvisatory character that depended for effect on the warmth of his phrasing, with bravura extravagances that left his audiences gasping.

Paganini and the evolution of violin technique

The Israeli violinist Ivry Gitlis said in Bruno Monsaiegnon's film, The Art of Violin, "Paganini is not a development … there were all these [violinists before Paganini] and then there was Paganini." Though some of these violin techniques employed by Paganini were already present, most accomplished violinists of the time focused on intonation and bowing techniques (the so-called right-hand techniques for string players), the two issues that are most fundamental for violinists even in the present day.

Arcangelo Corelli (1653-1713) was considered the father of violin technique, transforming the role of the violin from a continuo instrument to a solo instrument. At around the same period, the Sonaten und Partiten for solo violin (BWV 1001-1006) of Johann Sebastian Bach (1685-1750) firmly established the polyphonic capability of the violin. Other notable violinists included Antonio Vivaldi (1678-1741) and Giuseppe Tartini (1692-1770). Although the role of the violin in music has been drastically changed through this period, progress on violin technique was slow up to this point.

The first exhaustive exploration of violin technique was found in the 24 caprices of Pietro Locatelli (1693-1746), which at the time of writing, proved to be too difficult to play, although they are now quite playable. Rudimentary usage of harmonics and left hand pizzicato could be found in the works of August Durand, who allegedly invented these techniques. Whilst it was questionable whether Paganini pioneered many of these "violinistic" techniques that made him famous, it was certain that he was the one popularized them and brought them into regular compositions. 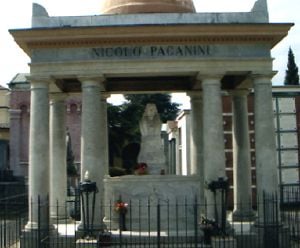 Tomb of Paganini in Parma, Italy

The composition and performance of violin music was dramatically changed because of Niccolo Paganini's contributions. As a youth, he was able to imitate other sounds (such as horn, flute, birds) through the violin. Though highly colorful and technically imaginative, Paganini's composition was not considered truly polyphonic. Eugène Ysaÿe once criticized that the accompaniment to Paganini's music was too much like a guitar's," lacking any character of polyphonism. Nevertheless, he expanded the timbre of the instrument to levels previously unknown.

Paganini was also the inspiration of many prominent composers. Both his La Campanella and A minor caprice (Nr. 24) have been an object of interest for a number of composers. Franz Liszt, Johannes Brahms, Sergei Rachmaninoff, Boris Blacher, Andrew Lloyd Webber, George Rochberg and Witold Lutosławski, among others, wrote well-known variations on its theme.

In performance Paganini enjoyed playing tricks, like tuning one of his strings a semitone high, or playing the majority of a piece on one string after breaking the other three. He astounded audiences with techniques that included harmonics, double stops, pizzicato with the left as well as the right hand, and near-impossible fingerings and bowings.

When he died in 1840, Paganini left behind a series of sonatas, caprices, six violin concerti, string quartets, and numerous guitar works.

The Caprice No. 24 in A minor, Op.1 (Tema con variazioni) has been the basis of works by many other composers. For a separate list of these, see Caprice No. 24 (Paganini).

Other works inspired by Paganini include:

Paganini's life inspired several films and television series. Most famously, in a highly acclaimed Soviet 1982 miniseries Niccolo Paganini the musician is portrayed by the Armenian stage master Vladimir Msryan. The series focuses on Paganini's persecution by the Roman Catholic Church. Another Soviet Union era cinematic legend, Armen Dzhigarkhanyan plays Paganini's fictionalized arch-rival, an insidious Jesuit official. The information in the series was generally accurate, however it also played to some of the myths and legends rampant during the musician's lifetime. In particular, a memorable scene shows Paganini's adversaries sabotaging his violin before a high-profile performance, causing all strings but one to break during the concert. An undeterred Paganini continues to perform on three, two, and finally on a single string.

Retrieved from https://www.newworldencyclopedia.org/p/index.php?title=Niccolo_Paganini&oldid=1087388
Categories:
Hidden category:
This page was last edited on 14 November 2022, at 23:29.
Content is available under Creative Commons Attribution/Share-Alike License; additional terms may apply. See Terms of Use for details.