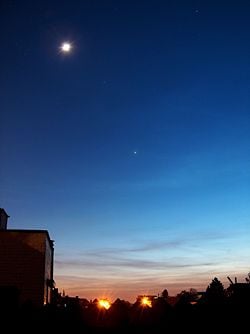 High up in the sky, the moon appears smaller.

The Moon illusion is a visual illusion (or optical illusion) in which the Moon appears larger near the horizon than it does while higher up in the sky. This optical illusion also occurs with the Sun and star constellations. Many explanations for this illusion have been proposed, some purely physical in nature, others involving innate or learned cognitive processes. Although the final solution to the phenomenon has not been agreed upon, the moon illusion has contributed greatly to research on how images are perceived and processed. In addition, the moon illusion has inspired in many a sense of wonder and amazement at the natural world. 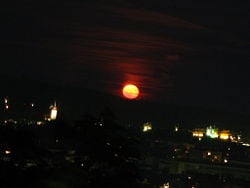 When the moon is close to the horizon, it appears to be much larger.

The moon illusion is seemingly as old as history itself. References to the moon illusion can be found as early as the seventh century B.C.E., and is mentioned in early Greek and Chinese writings. Aristotle also mentioned it in 250 B.C.E.[1]

When looking at the moon while it is high overhead, it appears to be significantly smaller than when it is close to the horizon. In many instances, it is difficult to convince people that the moon has remained the same size without proving it to them. The constant size of the moon regardless of its position in the sky can be proven using a theodolite, or by the much simpler method of holding a small coin at arm's length. The coin will cover the same amount of the moon no matter where the moon is in the sky. The illusion also becomes much less convincing when the horizon moon is viewed upside down (for instance, by bending over and viewing the moon through one's legs.) 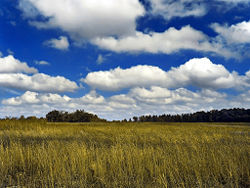 Clouds near the horizon are typically farther away from the viewer, while those high in the sky are closer, giving the impression of a flat, or gently curved, sky surface.

It is sometimes thought that the moon appears larger near the horizon as a result of some kind of magnification effect caused by the Earth's atmosphere. This is not true, although the atmosphere does change the color of the moon. The moon does appear slightly more ovoid in shape near the horizon, due to the weak prism effect of the atmosphere, but does not change significantly in size. Any change in size is a perceived change, not an actual visual change, and therefore cannot be attributed to atmospheric conditions.

One of the oldest explanations for the moon illusion is the apparent distance theory, which was first clearly described by Cleomedes around 200 C.E. This theory proposes that we tend to perceive the sky as more or less a surface, but unlike a hemispherical surface, it does not seem to be equally distant from us at all points. When we see clouds, birds, and airplanes in the sky, those near the horizon are typically farther away from us than those overhead. If we see an airplane overhead, its image gets smaller and smaller as it nears the horizon. This results in the perception of the sky as a fairly flat surface. In other words, we perceive the sky near the horizon to be farther away than the sky overhead. This theory is usually illustrated by the well-known drawing of the "flattened sky dome." This theory is related to the Ponzo Illusion, where a shape placed higher up on converging lines appears to be larger than a shape placed lower down. Because of perspective and distance cues, we expect shapes that are further away to be smaller; because of this, shapes that are the same size appear to be larger than they actually are.

One of the problems with the apparent size theory is that, in addition to the moon looking larger, it should theoretically also look farther away. In reality, most people perceive the moon as not only being larger when it is close to the horizon, but also nearer. To explain this, some use the "relative size hypothesis," which suggests that the perceived size of an object depends partly on the size of objects in its immediate visual environment. Thus, any trees or buildings visible in the vicinity of the moon make the moon appear larger.

Another attempt to explain the moon illusion was proposed by Restle, based on the assumption that size is always judged relative to other extents in the visual field. He suggested that differences in the grain of the visual scene, such that a distant horizon has finer grain than a closer one, result in terrain of different extents. These cause the observer to judge the moon close to the horizon as relatively larger.

Trehub has postulated that we have an innate subconscious cognitive processing mechanism that causes the angular size of objects at eye level to be perceived as greater than the angular size of the same objects seen when looking upward. Such a process is advantageous as it leads us to devote more visual processing resources to nearby space, and space at eye level, but fewer resources to things seen at higher elevation. Although he suggested this is a preprogrammed biologically-based mechanism, it is also possible that such perceptions can be modified through experience and by particular sets of visual cues.

Thus, while numerous explanations of the moon illusion have been proposed, there is no consensus. However, it is clear that the moon illusion is a robust and universal phenomenon, and has led to much research that has proven valuable in developing our understanding of our perceptual systems.

The moon illusion, like many visual and perceptual illusions, helps scientists formulate theories on how images are perceived and processed. In addition to scientific study, the moon illusion has probably done more than any other illusion to inspire a sense of wonder and amazement at the natural world, particularly in poets and artists.