The Minaret of Jam is located in the Shahrak District, Ghor Province, in western Afghanistan, by the Hari River. The 65 meters (210 ft) high minaret, surrounded by mountains that reach up to 2,400 meters (7,900 ft), had been built entirely of baked-bricks.[1] Famous for its intricate brick, stucco, and glazed tile decoration, the design consists of alternating bands of kufic and naskhi calligraphy, geometric patterns, and verses from the Qur'an (the surat Maryam, relating to Mary, the mother of Jesus). UNESCO designated the Minaret and Archaeological Remains of Jam a World Heritage Site in 2002.

UNESCO designated the Minaret of Jam a World Heritage Site along with two other archaeological sites; a Jewish Cemetery and a Water Reservoir. The Jewish cemetery indicates the presence of a Jewish community living in the vicinity of the Minaret of Jam. The water reservoir demonstrates the vital role water played in the survival and prosperity of the Ghurid Dynasty. The minaret, one of the finest examples of architecture during the Ghurid Period (1000-1220), provides an example of the magnificent architecture, art, and inscriptions that prevailed throughout northern India. Although it rises to a height of 65 meters (210 ft), built at an elevation of 1,900 meters (6,200 ft) above sea level far from any settled towns, the minaret suggests at a great city that once stood in what is now a desolate region, the ancient city of Firuzkuh, the capital of the Ghurid dynasty. From the capital of Firuzkuh, the Ghurid dynasty ruled Afghanistan and parts of northern India.[2]

The Sultan Ghiyas ud-Din (1157-1202) most likely constructed the Minaret of Jam in 1194 to commemorate his victory at Delhi, giving the minaret its most popular name, Victory Tower. The site probably also served as the summer residence of the Ghurid Emperors. The mighty Ghurid dynasty fell to the Kharizm, a people from south of the Aral Sea, in 1215. Mongol Ogodai destroyed Firuzkuh in 1222.[3]

For centuries, the Minaret had been lost and forgotten until rediscovered in 1886 by Sir Thomas Holdich, working for the Afghan Boundary Commission. The work of the French archaeologists André Maricq and Wiet finally brought the minaret to the world's attention in 1957. Herberg conducted limited surveys around the site in the 1970s, before the Soviet invasion of 1979 once again cut it off for the outside world.[4]

UNESCO accepted the nomination of he archaeological site of Jam as Afghanistan's first World Heritage site in 2002. UNESCO inscribed the site on it's list of World Heritage Sites in Danger, due to the precarious state of preservation of the minaret, and results of looting at the site. 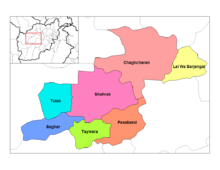 The circular minaret rests on an octagonal base. It had two wooden balconies topped by a lantern. The Qutub Minar in Delhi, also built by the Ghurid Dynasty, may have been a direct inspiration for the Minaret of Jam. After the Qutub Minar, the Minaret of Jam stands as the second-tallest brick minaret in the world.

The Minaret of Jam belongs to a group of approximately sixty minarets and towers built between the eleventh and the thirteenth centuries in Central Asia, Iran and Afghanistan, ranging from the Kutlug Timur Minaret in Old Urgench (long considered the tallest in existence) to the tower at Ghazni. The minarets may have been built as symbols of Islam's victory, while other towers may have been simply landmarks or watchtowers.[5]

Erosion, water infiltration and floods, due to its proximity to the Hari and Jam rivers, currently threatened the minaret of Jam. Earthquakes, which happen frequently in the region, pose another threat. Looters and illegal excavations have damaged the archaeological site surrounding the minaret. The tower has started to lean, but stabilization work has been underway to halt that danger. The archaeological landscape around Jam also includes the ruins of a "palace," fortifications, a pottery kiln and a Jewish cemetery, and has been suggested to be the remains of the lost city of Turquoise Mountain. Interior staircase of the Minaret of Jam

The Minaret of Jam probably sat on the location of the Ghurid dynasty's summer capital, Firuzkuh (Firuz Koh). The twelfth and thirteenth century Ghurids controlled not only Afghanistan, but also parts of eastern Iran, Northern India and parts of Pakistan. The Arabic inscription dating the minaret remains unclear. It could read 1193/4 or, more likely, 1174/5. It could thus commemorate the victory of the Ghurid sultan Ghiyas ud-Din over the Ghaznevids in 1192 in Delhi, or the defeat of the Ghuzz Turks at Ghazna in 1173.

The Minaret may have been attached to the Friday Mosque of Firuzkuh, which the Ghurid chronicler Juzjani states washed away in a flash-flood, some time before the Mongol sieges. Work at Jam by the Minaret of Jam Archaeological Project, has found evidence of a large courtyard building beside the minaret, and evidence of river sediments on top of the baked-brick paving.[6] The Ghurid Empire's glory waned after the death of Ghiyath ud-Din in 1202, forced to cede territory to the Khwarezm Empire. Juzjani states that the Mongols destroyed Firuzkuh in 1222.

The Minaret of Jam, seen from Koh-e Khara

The Turquoise Mountain refers to the lost Afghan capital of the Middle Ages.[7] Reputedly one of the greatest cities of its age, Ögedei Khan, son of Genghis Khan, destroyed the capital in the early 1220s, marking its lost to history. It has been proposed that the magnificent Minaret of Jam, in Shahrak District, Ghor Province, stands as the only existing remains of the city.

With the Allied invasion of Afghanistan in 2001, the Taliban's hold on ancient places broke, leaving the Ghor Province open to pillagers. After the invasion, hundreds of diggers flocked to the Minaret to uncover lost gold. And uncover they did. There remains very little of the present city when visited by Rory Stewart in 2002 (as much of it has been dug through), and many of the treasures that were in the city have now been sold in markets in Herat, Kabul, and Teheran.

Retrieved from https://www.newworldencyclopedia.org/p/index.php?title=Minaret_of_Jam&oldid=1086554
Categories:
Hidden category:
This page was last edited on 9 November 2022, at 18:44.
Content is available under Creative Commons Attribution/Share-Alike License; additional terms may apply. See Terms of Use for details.