Simple example of a 3/4 time signature, indicating three beats to a measure.

Meter or metre is the measurement of a musical line into measures of stressed and unstressed "beats," indicated in Western music notation by a symbol called a time signature. Properly, "meter" describes the entire concept of measuring rhythmic units, but it can also be used as a specific descriptor for a measurement of an individual piece as represented by the time signature, for example 2/4 time, 3/4 time, 6/8 time, 12/8 time, 3/2 time, and so on.

In Western music there are two basic metric characteristics; duple meter and triple meter. A meter such as 4/4 time or 9/8 time, are in effect compounds of these two basic metric components. Time signatures generally appear as a fraction. The first of the two numerals in a time signature signifies the number of beats in a measure or bar. The second numeral signifies the note value that is being used as the basic note qualifier. For example, a time signature of 4/4 indicates that there are four beats in the measure and a quarter note (4) is the value qualifier. A time signature of 3/8 indicates the there are three beats per measure and the eighth note (8) is the value qualifier.

Prior to the twentieth century, the use of asymmetrical meters in musical compositions, such as 5/4, 5/8 or 7/8, was very rare. The second movement of Tchaikovsky's Sixth Symphony was one of the first examples of music written entirely in an asymmetrical meter, 5/4 time. As the twentieth century progressed, composers would often change meters in rapid succession in order to achieve a varied rhythmic pulsation. This practice became an important rhythmic aspect in progressive jazz in the second half of the century as well.

When the organization of beats into regular groups is called meter, this organization creates an order within the musical composition which is like the tenet attributable to the concept of order from the Divine Principle. This principle organizes the attributes of polarity, harmony, and order to achieve a oneness in whatever action is undertaken. Meter thus assists in achieving rhythmic unity within a musical composition. 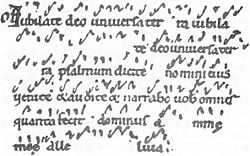 As early attempts at notation developed in the Middle Ages in Europe the neume system arose from the need to notate songs, usually for religious music in the form of chant. The exact timing (rhythm) was initially not a particular issue, as the music would generally follow the natural rhythms of the Latin language. However, by the tenth century, a system of representing up to four note lengths had evolved. These lengths were relative rather than absolute, and depended on the duration of the neighboring notes.

It was not until the fourteenth century that something akin to the modern system of fixed note lengths arose. Beginning in the fifteenth century, vertical bar lines were used to divide the musical staff into distinct sections. These did not initially divide the music into measures (bars) of equal length, but appear to have been introduced as an aid to the eye for "lining up" notes on different staves that were to be played or sung at the same time. The use of regular measures (bars) became commonplace by the end of the seventeenth century.

Rhythm is distinguished from meter in that rhythms are patterns of duration while "meter involves our initial perception as well as subsequent anticipation of a series of beats that we abstract from the rhythm surface of the music as it unfolds in time" (London 2004, 4). There are four different time signatures in common use:

In some regional music, for example Balkan music, a wealth of complex compound meters are used. This has influenced some Western music as well, for example, Béla Bartók, and Paul Desmond, composer of the jazz piece, Take Five.

Duple time is far more common than triple. Most popular music is in 4/4 time, although 2/2, or cut time (alla breve), such as in bossa nova, is also common. Doo-wop and some other rock styles are frequently in 12/8, or may be interpreted as 4/4 with heavy swing. Similarly, most classical music before the twentieth century tended to stick to relatively straightforward meters such as 4/4, 3/4 and 6/8, though some variations on these such as 3/2 and 6/4 are also found.

Stravinsky's The Rite of Spring

In music of the twentieth century, it became relatively common to change meter frequently—the end of Igor Stravinsky's The Rite of Spring is an extreme example—and the use of asymmetrical rhythms where each beat is a different length became more common. Such meters include quintuple rhythms as well as more complex constructs along the lines of 2+5+3/4 time, where each bar has a 2-beat unit, a 5-beat unit, and a 3-beat unit, with a stress at the beginning of each unit.

Some music has no meter at all (free time), such as drone-based music as exemplified by La Monte Young. Other music features rhythms so complex that any meter is obscured, such as in some pieces using serial techniques, or is based on additive rhythms, such as some music by Philip Glass.

Meter is often combined with a rhythmic pattern to produce a particular style. This is true of dance music, such as the waltz or tango, which have particular patterns of emphasizing beats which are instantly recognizable. This is often done to make the music coincide with slow or fast steps in the dance, and can be thought of as the musical equivalent of prosody. Sometimes, a particular musician or composition becomes identified with a particular metric pattern; such is the case with the so-called Bo Diddley beat.

Polymeter or Polyrhythm is the use of two metric frameworks simultaneously, or in regular alternation. Examples include Béla Bartók's String Quartet No. 2. Leonard Bernstein's "America" (from West Side Story) employs alternating measures of 6/8 (compound duple) and 3/4 (simple triple). This gives a strong sense of two, followed by three, stresses (indicated in bold type): // I-like-to be-in-A // ME RI CA//.

An example from the rock canon is "Kashmir" by the seminal British hard-rock quartet Led Zeppelin, in which the percussion articulates 4/4 while the melodic instruments present a riff in 3/4. "Touch And Go," a hit single by The Cars, has polymetric verses, with the drums and bass playing in 5/4, while the guitar, synthesizer, and vocals are in 4/4 (the choruses are entirely in 4/4.) In "Toads Of The Short Forest" (from the album Weasels Ripped My Flesh), composer Frank Zappa explains: "At this very moment on stage we have drummer A playing in 7/8, drummer B playing in 3/4, the bass playing in 3/4, the organ playing in 5/8, the tambourine playing in 3/4, and the alto sax blowing his nose." The metal band Meshuggah uses complex polymeters; typically the songs are constructed in 4/4, with guitar and bass drum patterns in other meters such as 11/8 and 23/16.

These are examples of what is also referred to as "tactus-preserving polymeter." Since the pulse is the same, the various meters eventually agree. (4 measures of 7/4 = 7 measures of 4/4.) The more complex, and less-common "measure preserving polymeter," occurs when there exists more than one meter, but the measure stays constant. This is also referred to as polyrhythm. These terms are found in the writings of Keith Waters and Steve Larson. Waters' 1996 article "Blurring the Barline: Metric Displacement in the Piano Solos of Herbie Hancock" from the Annual Review of Jazz Studies" and Larson's 2006 "Rhythmic Displacement in the Music of Bill Evans" are two examples.

Perceptually there appears to be little or no basis for polymeter as research shows that listeners either extract a composite pattern that is fitted to a metric framework, or focus on one rhythmic stream while treating others as "noise." This upholds the tenet that "the figure-ground dichotomy is fundamental to all perception" (Boring 1942, 253) (London 2004, 49-50).

Metric structure includes meter, tempo, and all rhythmic aspects which produce temporal regularity or structure, against which the foreground details or durational patterns are projected (Wittlich 1975, chp. 3).

Metric levels may be distinguished. The beat level is the metric level at which pulses are heard as the basic time unit of the piece. Faster levels are division levels, and slower levels are multiple levels (Ibid.).

Level of Meter is shown to be a spurious concept, since meter arises from the interaction of two levels of motion, the faster of which provides the pulses, and the slower of which organizes them in repetitive conceptual groups (Yeston, 1976).

Hypermeter is large-scale meter (as opposed to surface-level meter) created by hypermeasures which consist of hyperbeats (Stein 2005, 329). The term was coined by Cone (1968) while London (2004, 19) asserts that there is no perceptual distinction between meter and hypermeter.

A metric modulation is a modulation from one metric unit or meter to another.

Meter can be described in terms of deep structure, where, through rewrite rules, different meters (4/4, 3/4, and so on) generate many different surface rhythms. For example the first phrase of The Beatles' "A Hard Day's Night," without the syncopation, may be generated from its meter of 4/4:

Issues involving meter in song reflect a combination of musical meter and poetic meter, especially when the song is in a standard verse form. Traditional and popular songs fall heavily within a limited range of meters, leading to a fair amount of interchangeability. For example, early hymnals commonly did not include musical notation, but simply texts. The text could be sung to any tune known by the singers that had a matching meter, and the tune chosen for a particular text might vary from one occasion to another.

Retrieved from https://www.newworldencyclopedia.org/p/index.php?title=Meter_(music)&oldid=984941
Categories:
Hidden category:
This page was last edited on 21 October 2014, at 15:58.
Content is available under Creative Commons Attribution/Share-Alike License; additional terms may apply. See Terms of Use for details.