Mayfly is the common name for any of the insects that belong to the Order Ephemeroptera, characterized by a short-lived adult stage and fragile wings. The longer-lived immature stage is aquatic, and the mayfly is called naiad or, colloquially, nymph at this time. After one, two, or even more years in this stage, the mayfly transforms first into a pre-adult phase called the subimago, in which the insect has full-formed, functional wings but is reproductively immature, and then it molts into the reproductively mature adult. The presence of the winged, pre-adult stage is unique among insects (TOL 2002).

There are about 2,500 species of mayflies worldwide, including about 630 species in North America. Other common names for mayflies include "dayfly," "June bug," "shadfly," "Canadian soldier," and "fishfly" (Staneff-Cline and Neff 2007).

The mayfly belongs to group one taxa, or pollution–sensitive animals. This means if mayflies are in or around the water, the water should be good quality, perhaps even good enough to drink without distilling or boiling.

The name for the order comes from the Greek ephemeros, meaning "short-lived," and pteron, meaning "wing," referring to the short life span of adults, which may last only a few hours and no longer than a couple of days. This short life span has been used as literary symbol of the ephemeral nature of life. It also may symbolize the years of preparation for the brief moment when one can fulfill one's destiny.

As an insect, mayflies are characterized by three pairs of jointed legs; an abdomen that is divided into 11 segments and lacks any legs or wings; and a body separated into three parts (head, thorax, and abdomen), with one pair of antennae on the head. The true insects (that is, species classified in the Class Insecta) are also distinguished from all other arthropods in part by having ectognathous, or exposed, mouthparts in at least some stage.

As a winged insect, mayflies are placed in the Subclass Pterygota. (Wingless insects, such as the silverfishes and bristletails, are placed in the subclass Apterygota.) It is further placed, with members of the order Odonata (dragonflies, damselflies) in the taxonomic group Paleoptera. This infraclass includes those winged insects that are not able to fold their wings back over their abdomens, unlike the infraclass Neoptera (TOL 2003). While Ephemeroptera has traditionally been grouped with the Odonata and several extinct orders in Paleoptera, this grouping appears to be paraphyletic. What mayflies do share with dragonflies and damselflies is the nature of how the wings are articulated and controlled.

Although the term "fly" is part of the name, mayflies are not "true flies" as defined by entomologists. A true fly is any species of insect of the order Diptera, and these are characterized by having a single pair of true wings, which are used for flight, while the hind wings are reduced into a pair of small knob-like structures called the halteres. Mayflies have four wings, which are held vertically at rest.

Mayflies are mostly slender insects, with two pairs of fragile and transparent wings, and typically with two or three long, thread-like tails. Some species reach four centimeters in length. The aquatic larvae have chewing mouthparts, but these are vestigial in the adult, which do not feed.

Mayflies undergo incomplete metamorphosis, also known as hemimetabolism and gradual metamorphosis. This is the process whereby the larvae resembles the adults somewhat, but the juvenile forms are smaller and, if the adult has wings, lack wings. In this mode of development, there are three distinct stages: the egg, nymph, and the adult stage, or imago. These groups go through gradual changes; there is no pupal stage. In hemimetabolism, the development of larva often proceeds in repeated stages of growth and ecdysis (molting); these stages are called instars. The differences between juveniles in different instars are small, often just differences in body proportions and the number of segments.

In the mayfly, the adult female immediately after mating lays her eggs in water. Upon hatching, the larva lives in the water, often spending one, two, or even three years in this aquatic stage. Aquatic stages are known as naiads. (Sometimes the term nymph is used in the older literature, and is still more common among non-scientists, although aquatic biologists use the more universal term larva.) This gives way to the sub-adult phase, or subimago, in which the mayfly has fully formed and functional wings, but is reproductively immature. This pre-adult, subimago stage, with functional wings, is unique among insects, and mayflies undergo yet another molt to give rise to the adult phase (TOL 2002). Depending on the species, the sub-adult phase may last from as little as a few minutes to a couple of days, and the adult phase may be from a few hours to a day or at most two days (Staneff-Sline and Neff 2007).

A mayfly—note the two very long front legs and the two long "tails" at the hind end.

The naiad live primarily in streams under rocks, decaying vegetation, or in the sediment. Few species live in lakes, but they are among the most prolific. For example, the emergence of one species of Hexagenia was recorded on doppler radar along the shores of Lake Erie (PSERIE 2003). Most species feed on algae or diatoms, but there are a few predatory species.

The naiad stage may last from several months to as long as several years, with a number of molts along the way.

Mayfly naiads are distinctive in that most have seven pairs of gills on the dorsum of the abdomen. In addition, most possess three long cerci or tails at the end of their bodies. Some species, notably in the genus Epeorus, have only two tails. In the last aquatic stage, dark wingpads are visible.

Mayflies molt one more time after acquiring functional wings (this is also known as the alate stage). This unique, second-to-last winged instar is usually very short, often a matter of hours, and the mayfly is known as a subimago or to fly fishermen as a dun. This stage is a favorite food of many fish, and many fishing flies are modeled to resemble them.

The lifespan of an adult mayfly can vary from just 30 minutes to one or even two days depending on the species.

The primary function of the adult is reproduction; the mouthparts are vestigial, and the digestive system is filled with air. The wings are membranous (similar to a house fly's wings but with many more veins) and are held upright like those of a butterfly. The forewings are much larger than the hind wings. In most species, the males' eyes are usually large and the front legs unusually long, for use in locating and grasping females during mid-air mating. In some species, all legs aside from the males' front legs are useless.

It often happens that all the mayflies in a population mature at once (the hatch), and for a day or two in the spring or fall, mayflies will be everywhere, dancing around each other in large groups, or resting on every available surface. This happens in mid-June on the Tisza River in Serbia and Hungary; this kind of mayfly is called the tiszavirág (in Hungarian) or "tiski cvet" in Serbian which is translated as "Tisza flower." This natural phenomenon is called Tisza blooming. In certain regions of New Guinea and Africa, mayflies are eaten when they emerge en mass on a certain day. Males generally fly in swarms that undulate in the air 5-15 meters above the ground. 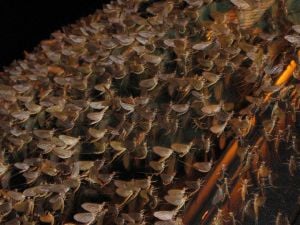 Mayfly sitting on a bench.

Both immature and adult mayflies are an important part of the food web, particularly for carnivorous fish such as trout in cold water streams or bass and catfish in warm water streams. Their presence is an indication of good water quality given their sensitivity to pollution (PSERIE 2003).

On the other hand, their emergence at the same time has been known to cause electrical blackouts due to interference at electrical substations (Staneff-Cline and Neff 2007; PSERIE 2003), and highway departments have even had to post warnings because of slick highway conditions caused by dead mayflies on roads (PSERIE 2003).

The status of most species of mayflies is unknown because many species are only known from the original collection data. At least two North American species are believed to be extinct: