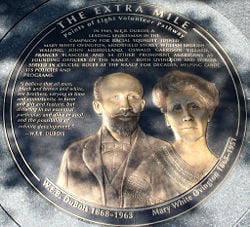 Mary White Ovington (born April 11, 1865 - died July 15, 1951) was an American civil rights activist, women's suffrage fighter, socialist, and journalist. She worked with the National Consumers League in efforts to end child labor and close sweatshops, and was co-founder of the National Association for the Advancement of Colored People (NAACP), where she served in leadership positions for four decades. She dedicated her life to the fight against racial discrimination and providing equal opportunities for African-Americans. Ovington's work with the NAACP bore fruit in significant victories, some after her death, which include ending racial segregation in education, in bringing public attention to lynchings of black Americans, and in successful voter registration of black Americans and their subsequent voting in elections, all steps towards achieving a society in which all people live together as one human family.

Mary White Ovington was born on April 11, 1865 in Brooklyn, New York, just three days before the assassination of President Abraham Lincoln. Her parents, members of the Unitarian Church, were supporters of women's rights and had been involved in the abolition movement. Mary was raised in a strong religious tradition, already as a child developing a firm sense of social justice.

She was educated from 1888-1890 at Packer Collegiate Institute, a prestigious girls’ school in Brooklyn. She then went on to study at Harvard Annex (later Radcliffe College), from 1891 to 1893. She left college early, her father not being able to support her due to his business suffering a setback during the depression of 1893. She found a job as Registrar at the Pratt Institute in Brooklyn, where she worked for two years.

Ovington became involved in the campaign for civil rights in 1890 after hearing Frederick Douglass speak in a Brooklyn church. In 1895, she helped found the Greenpoint Settlement in Brooklyn, the housing project for the working class. She also served as vice-president of the Brooklyn chapter of the National Consumers League, an organization working to put an end to child labor and sweatshops. About the same time she became interesting in socialism.

Ovington served as the head of the Greenpoint Settlement from 1895 to 1904, when she was appointed fellow of the Greenwich House Committee on Social Investigations. She received a fellowship from Greenwich House to study the status of blacks in New York City. Over the next five years she studied employment and housing problems of the black community. The result of this effort was her book, Half a Man: The Status of the Negro in New York (1911), in which she argued that white prejudice prevented blacks from receiving just opportunities to develop their capacities.

During her investigations, she met W.E.B. Du Bois, an African-American from Harvard University, and she was introduced to the founding members of the Niagara Movement. Ovington became one of the closest advisers to Du Bois, and worked with him on various progressive projects.

Ovington joined the Socialist Party in 1905, where she met people such as Daniel De Leon, Asa Philip Randolph, Floyd Dell, Max Eastman, and Jack London, who argued that racial problems were as much a matter of class as of race. She wrote for radical journals and newspapers such as, The Masses, New York Evening Post, and The Call.

On September 3, 1908 she read an article written by socialist William English Walling entitled "Race War in the North" in The Independent. Walling described a massive race riot directed at African-American residents in the hometown of Abraham Lincoln, Springfield, Illinois that led to seven deaths. Walling ended the article by calling for a powerful body of citizens to come to aid blacks. Ovington responded to the article by writing to Walling and meeting at his apartment in New York City along with social worker Henry Moskowitz. The group decided to launch a campaign by issuing a "call" for a national conference on the civil and political rights of African-Americans on the centennial of Lincoln’s birthday, February 12, 1909.

The following year Ovington attended the Universal Races Congress in London. She remained active in the struggle for women's suffrage and as a pacifist opposed America's involvement in the First World War. During the war, Ovington supported Asa Philip Randolph and his magazine, The Messenger, which campaigned for black civil rights.

After the war, Ovington continued to serve in the NAACP as acting chairman (1917-1919), chair of the board (1919-1932), and treasurer (1932-1947). She was the main fundraiser in the organization, and organized numerous conferences and publicity campaigns.

The NAACP fought a long legal battle against segregation and racial discrimination in housing, education, employment, voting, and transportation. It also fought against racial violence, especially lynching and police brutality. The NAACP appealed to the Supreme Court to rule that several laws passed by southern states were unconstitutional and won three important judgments between 1915-1923 concerning voting rights and housing.

The NAACP was criticized by some members of the African American community. Booker T. Washington opposed the group because it proposed an outspoken condemnation of racist policies in contrast to his policy of quiet diplomacy behind the scenes.

Due to her failing health, Ovington retired as a board member of the NAACP in 1947 and in doing so, ended her 38 years service with the organization. In the same year she published The Walls Came Tumbling Down, her autobiographical history of the NAACP.

She died on July 15, 1951 in Newton Highlands, Massachusetts.

Mary White Ovington was crucial in the fight against racial discrimination in the United States. She remains known not only known as a co-founder of the NAACP, but as one of its leaders. She led the organization to devote most of its efforts to the desegregation of the nation's school systems. This resulted in the landmark U.S. Supreme Court decision Brown v. Board of Education in 1954, three years after her death, which declared that segregated schools were illegal.