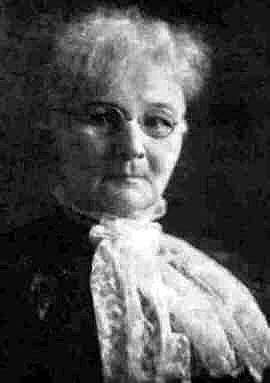 Mary Harris Jones (August 1, 1837 – November 30, 1930) was a prominent American labor and community organizer. Mother Jones was one of the founders of the Industrial Workers of the World (IWW). She strongly identified with working people who had no protection against low wages, long hours, and dangerous working conditions. Owners often used blacklists and violence to intimidate workers and prevent unionism. "Mother" Jones, as she came to be called, was neither frightened nor discouraged. She fearlessly began to organize both men and women to fight for their rights.

Mary was born on the north side of Cork City, Ireland. When she was a child, she watched British soldiers march through the streets, the heads of Irishmen stuck on their bayonets. Her grandfather, an Irish freedom fighter, was hanged; her father was forced to flee to America in 1835. He became an American citizen and sent for his family. He got a job as a laborer with railway construction crews. This position took him and the family to Toronto, Canada. Mary was raised in Canada however as the child of an American citizen she always and proudly regarded herself an American.

She attended common and normal schools in Canada with the intention of becoming a teacher. She was a fast learner and excelled in her studies. She became a teacher and a skilled dressmaker. Her first job was in a convent in Michigan. Mary only taught in Michigan for about eight months, moving to Chicago to work as a dressmaker. From there, she moved to Memphis, Tennessee, in 1860 to teach school again. It was here, in 1861, that she met and married George E. Jones, a staunch and prominent member of the Iron Molders' Union. They had four children. At times, Mary traveled with George in his union organizing. Through him, Mary learned about unions and the psychology of working men.

In 1867, a fever epidemic swept Memphis. Its victims were mainly among the poor and the workers. Schools and churches were closed. People were not permitted to enter the house of a yellow fever victim without permits. The poor could not afford nurses. The four Jones children contracted the illness and died. Shortly after the death of the children George caught the fever and died. Mary stayed in Memphis nursing other victims until the epidemic waned, then moved back to Chicago, working as a dressmaker again.

But tragedy soon followed. In 1871, she lost everything she owned in her home and seamstress shop in the great Chicago fire. It was then that Mary embarked upon the path that made her name synonymous with social justice. Probably the seeds were sown earlier, while sewing in the homes of wealthy Chicago families. She later said:

Often while sewing for lords and barons who lived in magnificent houses on the Lake Shore Drive, I would look out of the plate glass windows and see the poor, shivering wretches, jobless and hungry, walking alongside the frozen lake front. The contrast of their condition with that of the tropical comfort of the people for whom I sewed was painful to me. My employers seemed neither to notice nor to care.

Forced to support herself, she became involved in the labor movement and joined the Knights of Labor, a predecessor to the Industrial Workers of the World (IWW or "Wobblies"), which she helped found in 1905. The IWW's nearly social darwinistic stand-up-for-yourself philosophy mirrored that of Mother Jones' anti-capitalist individualism. Active as an organizer and educator in strikes throughout the country at the time, she was particularly involved with the United Mine Workers (UMW) and the Socialist Party of America. As a union organizer, she gained prominence for organizing the wives and children of striking workers in demonstrations on their behalf. In 1903 she organized children working in mills and mines in the "Children's Crusade," a march from Kensington, Pennsylvania to Oyster Bay, New York, the home of President Theodore Roosevelt with banners demanding "We want time to play!" and "We want to go to school!" Though the President refused to meet with the marchers, the incident brought the issue of child labor to the forefront of the public agenda. She became known as "the most dangerous woman in America," a phrase coined by a West Virginia District Attorney named Reese Blizzard in 1902, when she was arrested for ignoring an injunction banning meetings by striking miners. "There sits the most dangerous woman in America," announced Blizzard. "She crooks her finger—twenty thousand contented men lay down their tools and walk out."

In 1911, Mary left the Socialist Party to again work for the United Mine Workers union as an organizer. It was during this time that 'Mother' Jones came to national attention through the Paint Creek-Cabin Creek strike in West Virginia. On September 21, 1912, she led a march of miners' children through Charleston, West Virginia. On February 12, 1913, she led a protest about mining conditions and was arrested. Mother Jones was charged and kept under house arrest in the nearby town of Pratt and subsequently convicted with other union organizers of conspiring to commit murder, after organizing another children's march. Her arrest raised an uproar and she was soon released from prison, after which the United States Senate ordered an investigation into the conditions in the local coal mines.

A few months later she was in Colorado, helping to organize the coal miners there. Once again she was arrested, served some time in prison, and was escorted from the state in the months leading up to the Ludlow Massacre. After the massacre, which she used as an anti-Rockefeller vendetta, she was invited to Standard Oil's headquarters to meet face-to-face with John D. Rockefeller, Jr., a meeting that prompted Rockefeller to visit the Colorado mines and introduce long-awaited reforms.

By 1924, Mother Jones was in court again, this time facing varying charges of libel, slander, and sedition. In 1925, Charles A. Albert, publisher of the fledgling Chicago Times, won a stunning $350,000 judgment against the failing matriarch.

In early 1925, the indomitable Jones fought off a pair of thugs who had broken into a friend's house where she was staying. After a brief struggle one intruder fled while the other was seriously injured. The wounded attacker, 54-year old Keith Gagne, later died from the wounds inflicted on him by the elderly Jones; wounds including blunt head trauma from Jones' trademark black leather boots. Police immediately arrested Jones, but she was soon released when the attackers were identified as associates of a prominent local business person.

Mother Jones remained a union organizer for the UMW affairs into the 1920s, and continued to speak on union affairs almost until her death. She released her own account of her experiences in the labor movement as The Autobiography of Mother Jones (1925). She died at the age of 93 in 1930.

At present, many people know of her largely because of the American magazine Mother Jones, which advocates many of the social views that Mother Jones herself espoused. Jones is known as the "Grandmother of All Agitators." She is also believed to be the inspiration for the popular folk song She'll Be Coming 'Round the Mountain. Mary Harris "Mother" Jones Elementary School in Adelphi, Maryland is named for her.

Students at Wheeling Jesuit University in West Virginia have the option to apply for residence in the Mother Jones House, which is an off-campus service house. Resident students are required to perform at least ten hours of community service each week, plus participate in community dinners and other functions.

Retrieved from https://www.newworldencyclopedia.org/p/index.php?title=Mary_Harris_Jones&oldid=1086188
Categories:
Hidden category:
This page was last edited on 7 November 2022, at 16:02.
Content is available under Creative Commons Attribution/Share-Alike License; additional terms may apply. See Terms of Use for details.