Marie Taglioni (April 23, 1804 – April 24, 1884) was a famous Italian ballerina of the Romantic ballet era, a central figure in the history of European dance. Despite the fact that she was not a great beauty, her combination of strength and delicacy brought her fame and great acclaim as a dancer. In 1822, Taglioni made her debut in Vienna. However, it was not until her starring role in La Sylphide, a romantic ballet choreographed by her father, that she became famous throughout Europe. Although she wasn't the first to dance en pointe, she was the first ballerina to do so for the full length of a work.

Taglioni spent her mature years in St. Petersberg, where she captivated Russian audiences and became a guiding light of the famous Kirov Ballet. Her pioneering style set the standard for female dancers for decades to come, as ballerinas throughout Europe sought to emulate her grace and delicacy, both of which belied a tremendous strength and discipline. Even her style of dress has exerted a lasting influence. She remains an inspiring example of what can be accomplished against the odds by a young artist of vision and determination.

Marie Taglioni was born into a well-known dancing family in Stockholm, Sweden. The family history in dance dates back to the 1700s, when Carlo Talgioni and his wife, Maria, had two sons, Filippo and Salvatore, both of whom became choreographers. Filippo and his Swedish wife, Sophia, had two children, Marie and Paul. Marie began studying ballet under a Parisian ballet instructor at a young age. Labeling her an "ugly duckling," Marie's teacher discarded her at the age of six. In mockery, he asked, "will that little hunchback ever learn to dance?"

After this unfortunate rejection, Filippo decided to train his daughter himself. He put her through six hours of rigorous practice each day. Using a method much like the Cecchetti method that was to develop many years later, Filippo instructed Marie in a modest, light, delicate style, placing emphasis on elevation and pointe technique. At night, Marie was reportedly so exhausted that someone had to assist her in undressing and climbing into bed.

Surviving the trying years of her father's pitiless but determined training, Marie made her first public appearance in Vienna at the age of 18 in a ballet choreographed by her father—La Reception d'une jeune nymphe a la tour de Terpsichore. Her success was immediate and was repeated in the chief towns of Germany. On July 23, 1827, she made her Paris debut at the Paris Opera Ballet, in the Ballet de Sicilien and aroused great enthusiasm from her audience. 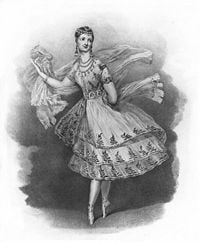 Italian ballerina Marie Taglioni in La Sylphide, although some believe this lithograph depicts her in La Bayadère

Her true rise to fame, however, came when Filippo created the ballet La Sylphide (1832) for her. Designed as a showcase for Marie's talent, it was the first ballet where the ballerina danced en pointe for the work's entirety. Marie is attributed with perfecting this technique using ballet slippers—not pointe shoes—a particularly difficult feat without reinforcement in the block of the shoes.

Marked by her stand-out performance in La Sylphide, Marie Taglioni is considered the first star of the Romantic ballet era. Set in Scotland, La Sylphide's entrancing story about forest fairies and witches appealed greatly to audiences in this Romantic age of Keats and Byron. It originated the style of the Romantic ballet, of which Filippo Taglioni was later named the father. Marie in her long, white tutu dancing lightly on her pointe shoes became the new image and fashion of the Romantic ballerina, replacing the classical style. Marie's fragility when performing, coupled with her ethereal quality of dancing, enraptured her audiences even more. While women of the day copied her hairstyle, little girls went out and bought La Sylphide dolls to emulate the iconic Marie.

Around this time, a contender rose in the ranks at the King's Theatre in London. While Marie was sylphlike, her rival Fanny Ellesler was unapologetically human, earthbound and voluptuous. The director of the Paris Opera was convinced that the French audiences would love Ellesler and offered her a contract. In 1834, Ellesler made her debut at the Opera in Coralli's ballet La Tempete. Her first performance divided Paris into two camps, pro-Marie, the other, pro-Fanny.

Furious at Ellesler's engagement by the director of the theatre, Marie must have been very pleased when Ellesler's style failed to reflect the true spirit of La Sylphide. Painfully aware of her failure as a replacement for Marie, Ellesler fled to America to continue her career. Marie, on the other hand, sensed that her glorious reign had nevertheless received a setback. She married Count Gelbeit de Voisins in 1835, but after three years the marriage ended in divorce. 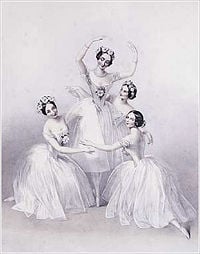 In 1837, Marie left the Paris Opera Ballet to take up a three-year contract in St. Petersburg at the Mariinsky Ballet, also known as the Kirov Ballet, where she would remain for the better part of the nineteenth century.

Eagerly awaiting Marie's arrival in Russia, a special brochure called The Biography of Marie Taglioni was distributed in St. Petersburg, and the literary supplement to the gazette, Russian Veteran published a biographical article about her. For her first appearance in La Sylphide at the St. Petersburg Bolshoi Theatre, the hall was filled beyond capacity. It didn't take long for Russians to espouse her as their own. Critics referred to her as "our" Taglioni, as did the public. More than anything, it was the essence of her art that captivated Marie's Russian audiences. Ballet's dreamy quality reflected the mood, pervasive in Russian society during those years. The ballerina reminded them of their romantic spirit, fraught with passion and longing.

Well-known Soviet ballet critic Lubov Blok in the 1930s wrote, "All that romantic poetry, painting and music could express, Taglioni could express in her dancing." It was in Russia, after her last performance in the country in 1842 (and at the height of the cult of the ballerina), that a pair of her pointe shoes were sold for two hundred rubles, reportedly to be cooked, served with a sauce and eaten by a group of balletomanes. 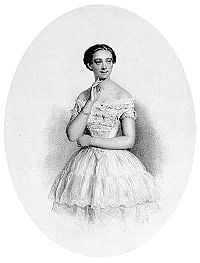 Marie retired from performing in 1847. For a time she took up residence at the Ca d'Oro on the Grand Canal in Venice, but because of her father's misuse of money, she became bankrupt. When the Paris Opera Ballet was reorganized on stricter, more professional lines, she was its guiding spirit. With the director of the new Conservatoire de danse, Lucien Petipa and Petipa's former pupil the choreographer Louis Mérante she figured on the six-member select jury of the first annual competition for the Corps de ballet, held April 13, 1860. Her only choreographic work was Le Papillon (1860) for her student Emma Livry, who is infamous for dying in 1863 when her costume was set alight by a gas lamp (limelight) used for stage lighting.

Later, she taught social dance to children and society ladies; she also took a limited number of ballet pupils. She found it difficult to make much money from this, so she had to teach almost until the day she died at 80 in 1884.

Johann Strauss II composed the Marie Taglioni Polka (Op. 173) in her honor using music from ballets in which she had appeared.

The art of perfecting ballet en pointe is Marie's most significant legacy. She created a delicate new style, marked by floating leaps and balanced poses such as the arabesque, that typified the early nineteenth-century Romantic style. Even her fine-textured, transluscent white skirts would evolve into the tutu worn by most classical ballerinas. In short, Marie Taglioni—pioneer of the Romantic ballet—created a new style and fashion that would leave a lasting impression on dance culture in Europe and, subsequently, everywhere else in the world.

Retrieved from https://www.newworldencyclopedia.org/p/index.php?title=Marie_Taglioni&oldid=1085972
Categories:
Hidden category:
This page was last edited on 6 November 2022, at 04:14.
Content is available under Creative Commons Attribution/Share-Alike License; additional terms may apply. See Terms of Use for details.