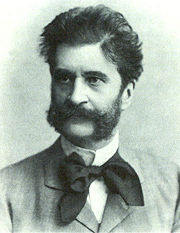 Johann Strauss II (Also, Johann Strauss the Younger, Johann Sebastian Strauss) (October 25, 1825 – June 3, 1899) was an Austrian composer known especially for his waltzes and operettas or light comedies which were very popular with the Viennese public. Son of the composer Johann Strauss I and brother to Josef Strauss and Eduard Strauss, Johann II is the most famous composer of the Strauss family. The best known of his many famous waltzes is On the Beautiful Blue Danube, also known as the "Blue Danube Waltz."

Although he faced sometimes bitter rivalry from his father, the younger Strauss is largely credited with building on his father's foundation of popularizing the waltz in Vienna. Together, they elevated the waltz from a lowly peasant dance to sparkling entertainment for the royal Habsburg court.

Known as the Waltz King, Strauss the Younger ultimately enjoyed greater fame than his predecessors in the early waltz movement, such as his father and Josef Lanner. Some of his polkas and marches are also well known, as is his operetta Die Fledermaus. 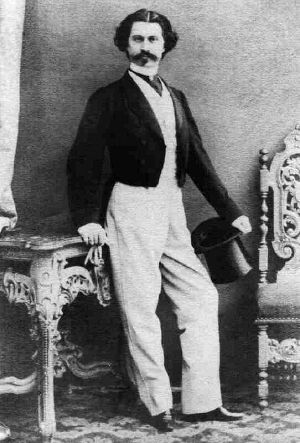 Strauss was born in Vienna, Austria. His father, a strict disciplinarian, did not want him to become a musician, but he studied the violin secretly as a child, ironically with his father's first violinist in the Strauss orchestra, Franz Amon. It was only when his father left the family after taking a mistress that Johann II, then 17, was able to concentrate fully on a career as a composer.

He then studied counterpoint and harmony with theorist Joachim Hoffmann, who owned a private music school. His talents were also recognized by composer Josef Drechsler, who taught him exercises in harmony. His other violin teacher, Anton Kollmann, the ballet coach of the Vienna Court Opera, also wrote excellent testimonials for him. Armed with these, he approached the Viennese authorities to apply for a license to perform in official circles. He soon formed a small orchestra, recruiting his members at the Zur Stadt Belgrad tavern, where musicians seeking work could be easily found.

Johann Strauss I's influence over the entertainment establishments meant that many of them were wary of offering the younger Strauss a contract for fear of angering the elder Strauss. However, Strauss Jr. was able to persuade the Dommayer's Casino to give him his Vienna debut. The local press were soon frantically reporting a “Strauss v. Strauss” rivalry between father and son, and Strauss Sr., furious with the proprietor, refused to play ever again at the Dommayer's Casino, which had been the site of many of his earlier triumphs.

Strauss Jr. thus found the early years of his career difficult, but he soon won over audiences after accepting commissions to perform away from home. The first major appointment for the young composer was his award of the honorary position of Kapellmeister of the 2nd Vienna Citizen's Regiment, which had been left vacant following waltz master Josef Lanner's death two years before.

Political events led to further alienation between father and son, and also to professional problems for the younger Strauss. During the revolutionary years of 1848-49, the elder Strauss remained loyal to the crown, while Johann Jr. sympathized with the revolutionaries. Around this time, he wrote the waltzes Freiheitslieder (Songs of Freedom) op. 52 and Burschenlieder op. 55, as well as the marches Revolutions March, op. 54, and the stirring Studenten Marsch, op. 56. His sense of patriotism proved to be professionally disadvantageous, however, as the Austrian royalty twice denied him the much coveted KK Hofballmusikdirektor position, which was first designated especially for Johann I. Further, the younger Strauss was also accused by the Viennese authorities of stoking revolutionary feelings by publicly playing the infectious La Marseillaise, but he was later acquitted. Shortly after his acquittal, he composed the Geißelhiebe Polka op. 60, which contains elements of La Marseillaise in its Trio section as a musical riposte to his arrest. Meanwhile, Strauss Sr. remained loyal to the Danube monarchy and composed his Radetzky March op. 228 dedicated to the Habsburg field marshal Joseph Radetzky von Radetz which would become his most well-known work.

When the elder Strauss died from scarlet fever in 1849 in Vienna, the younger Strauss merged both their orchestras and engaged in further tours. He also closed ranks with the political establishment, subsequently composing a number of patriotic marches dedicated to the new Habsburg monarch Franz Josef I, such as the Kaiser Franz-Josef Marsch, op. 67, and the Kaiser Franz Josef Rettungs Jubel-Marsch, op. 126.

Strauss would eventually surpass his father's fame and become the most popular of waltz composers of the era, extensively touring Austria, Poland and Germany with his orchestra. He also made visits to Russia where he performed at Pavlovsk and wrote many compositions there, later retitling them to suit his Viennese audiences back home, Britain where he performed with his first wife Jetty Treffz at the Covent Garden, France, Italy, and the United States later in the 1870s, where he took part in the Boston Festival and was the lead conductor in the Monster Concert of over 1,000 musicians.

Among the more popular dance pieces Strauss wrote in this period were the waltzes Sängerfahrten op. 41, Liebeslieder op. 114, Nachtfalter op. 157, Accelerationen op. 234 and the polkas Annen op. 117, and Tritsch-Tratsch-Polka op. 214. 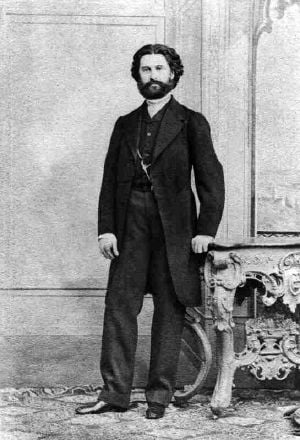 He married the singer Jetty Treffz in 1862 and applied for the KK Hofballmusikdirektor Music Director of the Royal Court Balls position which he eventually achieved, in 1863, after being denied several times before for his frequent brush with the local authorities. His involvement with the court balls meant that his work has been elevated to be even heard by the royalty.

His second wife, Angelika Dittrich (an actress) whom he married in 1878, was not a fervent supporter of his music and their differences led him to seek a divorce. Denied a divorce by the Roman Catholic Church Strauss changed religion and nationality, becoming a citizen of Saxe-Coburg-Gotha on January 28 1887. His new wife, Adele (whom he married on August 15, 1887), encouraged the creative talent to flow once more in his later years, resulting in much fine music such as those found in the operettas Der Zigeunerbaron and Waldmeister and the waltzes Kaiser-Walzer, Kaiser Jubilaum, Märchen aus dem Orient op. 444, and Klug Gretelein op. 462.

After establishing his first orchestra prior to his father's death, Strauss founded many others for the various entertainment establishments, such as the Sperl ballroom as well as the Apollo, where he dedicated appropriately-titled pieces to commemorate the first performances there. Later, he accepted commissions to play in Russia for the Archduke Michael and Tsar Alexander II especially in Pavlovsk, where a new railway line was built. When the commissions became too much to be handled by him alone, he sought to promote his younger brothers Josef and Eduard as deputies to work in his absence from either poor health or a busy schedule. Josef went on to make his own mark as a waltz composer and this fresh rivalry stimulated Johann to consolidate his position as the "Waltz King" with his exquisite The Beautiful Blue Danube waltz. 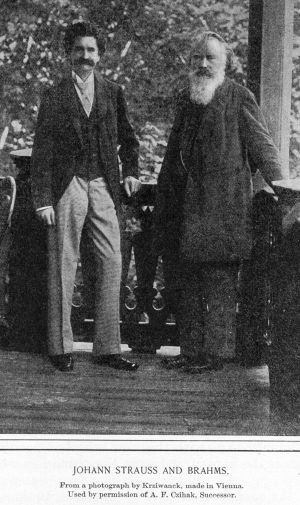 Johann Strauss was still not without rivals. Stiff competition was present in the form of Karl Michael Ziehrer and Emile Waldteufel. Phillip Fahrbach denied the younger Strauss the commanding position of the KK Hofballmusikdirektor when the latter first applied for the post.

The German operetta composer Offenbach, who made his name in Paris, posed a challenge to Strauss in the operetta field. Later, the emergence of operetta maestro Lehár would usher in the Silver Age in Vienna and most certainly sweep aside any lingering Strauss dominance in the operetta world. Ziehrer would eventually eclipse the Strauss family after Johann and Josef's deaths.

On the other hand, Strauss was greatly admired by prominent composers of the day, including Richard Wagner, who once admitted that he loved the waltz Wein, Weib und Gesang op. 333. Johannes Brahms was a personal friend of Strauss, to whom he dedicated his waltz Seid umschlungen Millionen or 'Be Embraced Millions' op. 443, inspired from a poem by Friedrich Schiller. Other admirers include Richard Strauss (unrelated to the Strauss family).

Strauss' operettas have not had as much enduring success as have his dance pieces and much of the success was reserved for Die Fledermaus and Der Zigeunerbaron. Notwithstanding the lack of popularity of his operettas, many dance pieces drawn from his lukewarmly-received operettas have gained lasting recognition such as Cagliostro-Walzer op. 370 and Rosen aus dem Süden Walzer, op. 388. He also wrote an opera, Ritter Pásmán. His most successful operetta was Die Fledermaus (1874).

Johann Strauss II died from pneumonia in Vienna in 1899 at the age of 74 and was buried there in the Zentralfriedhof. At the time of his death, he was still working on his unfinished ballet, Aschenbrödel.

Strauss' music is now regularly performed at the annual Neujahrskonzert of the Vienna Philharmonic Orchestra, as a result of the efforts by Clemens Krauss who performed a special all-Strauss program in 1929, with the Viennese orchestra. Many distinguished Strauss interpreters include Willi Boskovsky who carried on the "Vorgeiger" tradition of conducting with violin in hand as was the Strauss family custom; as well as Herbert von Karajan and the opera conductor Riccardo Muti.

Most of the original manuscripts of the most familiar Strauss works were lost when Eduard Strauss destroyed much of the original Strauss orchestral archives in 1907. Eduard, then the only surviving brother, took this drastic precaution to prevent Strauss works from being claimed as another composer's own. The Johann Strauss societies around the world have painstakingly pieced together a large body of these destroyed works to be appreciated by future generations.

A new generation was introduced to the music of Johann Strauss II by film American film director, Stanley Kubrick, who used Strauss' most well-known composition, On The Beautiful Blue Danube Waltz, in the score to his 1968 film, 2001: A Space Odyssey.

listed chronologically within category (with date of composition or first performance)