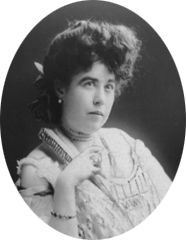 Margaret Tobin Brown (July 18, 1867 – October 26, 1932) was an American socialite, philanthropist, and activist who became famous as one of the survivors of the sinking of the RMS Titanic. She worked actively to protect the rights of women, children, and minorities. She became known, by her own declaration, following the Titanic disaster, as The Unsinkable Molly Brown and has been known ever after by that appellation.

Margaret Tobin was born in Hannibal, Missouri, one of six children of Irish immigrants. The house in which she was born was located in an area then known as "Irish Shanty Town." The tiny houses were close together on dirt streets. The livestock were housed in the basement room next to the kitchen, as the Tobin’s could not afford to build a barn. Margaret's parents, John and Johanna Tobin, raised a close-knit Irish Catholic family. They were active in the local Hannibal Church.

Johanna's sister, Mary O'Leary, lived across the street from the family and taught school. Margaret received a basic grammar school education. But at age 13 she was expected to get a job to help support the family.

Margaret went to work in a four-story brick tobacco factory. There were several tobacco factories in Missouri at that time, as tobacco was a major crop. It continued to be a major crop into the early 1900s. Men, women and children worked in the factories, preparing the leaves for export, or rolling them into cigars. It was dusty, unhealthy work, and they were worked 12-hour days, six days a week.

When she was 18, Margaret moved to Leadville, Colorado, with her sister, obtaining a job in a department store. It was here she met and married James Joseph “J. J.” Brown, an enterprising, self-educated man, in 1886. Margaret had always planned on marrying a rich man but she married J. J. for love. She said,

I wanted a rich man, but I loved Jim Brown. I thought about how I wanted comfort for my father and how I had determined to stay single until a man presented himself who could give to the tired old man the things I longed for him. Jim was as poor as we were, and had no better chance in life. I struggled hard with myself in those days. I loved Jim, but he was poor. Finally, I decided that I'd be better off with a poor man whom I loved than with a wealthy one whose money had attracted me. So I married Jim Brown.

It was in Colorado that Brown first became involved in women's rights, helping to establish the Colorado chapter of the National American Women's Suffrage Association, and worked in soup kitchens to assist miners' families. The family came into great wealth when J. J.'s engineering efforts proved instrumental in the production of a substantial gold and copper seam at the Little Jonny mine of his employers, Ibex Mining Company, and he was awarded 12,500 shares of stock and a seat on the board.

In 1894, the Browns moved to Denver, Colorado, which gave the family more social opportunities. Margaret became a charter member of the Denver Woman's Club, whose mission was the improvement of women's lives through continuing education and philanthropy. In 1901, she was one of the first students to enroll at the Carnegie Institute in New York. Adjusting to the trappings of a society lady, Brown became well-immersed in the arts and fluent in French, German and Russian. In 1909 and 1914 she ran for Congress; she also assisted in the fund-raising for Denver's Cathedral of the Immaculate Conception which was completed in 1912. Margaret also worked with Judge Ben Lindsey to help destitute children and establish the United States' first juvenile court, which helped form the basis of the modern U.S. juvenile courts system. Her lifelong career as a human and labor rights advocate earned her prominence in the aftermath of the Ludlow Massacre in Trinidad, Colorado in 1914. 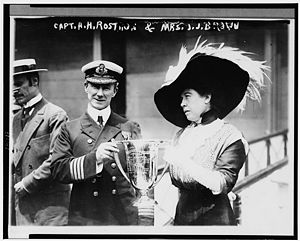 Margaret was on a European tour with her daughter Helen in April of 1912 when she learned that her first grandson, Lawrence, was ill. She immediately booked first class passage back to the United States on the first ship that was available, the Titanic. When the ship collided with the iceberg and began to sink, she helped many others to the lifeboats before being forced into one herself. Once in the water, she and the other women in lifeboat number six worked together to row and keep spirits up despite the alleged panic and gloom of Quartermaster Robert Hichens.

After being rescued by the RMS Carpathia, Brown helped prepare lists of those who had been rescued, acted as a translator for other survivors, and headed the Titanic Survivors' Committee, a group of wealthy survivors who raised funds to help those less fortunate among surviving passengers and crew. The committee collected $10,000 from survivors and Carpathia passengers by the time the ship made port in New York City. She later raised funds to reward Captain Rostron and his crew; she personally presented Rostron with a loving cup on behalf of the Titanic survivors in New York City. The media acclaimed her as one of the heroines of the hour for both her grace under pressure and her useful contributions. She was quoted as saying that her survival was attributable to "typical Brown luck... we're unsinkable." She became known as the Unsinkable Mrs. Brown for the rest of her life.

She was also one of the people behind the raising of the Titanic Memorial in Washington, D.C.

Her fame as a prominent Titanic survivor helped her promote the issues she felt deeply about—the rights of workers and women, education and literacy for children, and historic preservation. During World War I, while in France, she worked with the American Committee for Devastated France to rebuild areas behind the front line, and helped wounded French and American soldiers. She was awarded the French Legion of Honor shortly before her death for her "overall good citizenship" including her relief work in France, her efforts for Titanic survivors, and her activism and philanthropy at home in America.

The Myth of Molly Brown

The legend of "Molly" Brown was created by Denver Post reporter Gene Fowler, who in the 1930s wrote a number of imaginative folk stories about Margaret Brown. Sensationalist writer Carolyn Bancroft elaborated upon Fowler’s stories and her highly fictional depiction of Brown's life was turned into a pamphlet, a radio script, and eventually a Broadway musical called The Unsinkable Molly Brown. MGM turned the musical into a 1964 film starring Debbie Reynolds as Margaret "Molly" Brown and Harve Presnell as J. J. Brown.

The Brown family at first attempted to mitigate or correct the legend of "Molly," but eventually withdrew from the public and refused to speak with writers, reporters, or historians. Only recently have they agreed to cooperate with the efforts of a historian, Kristen Iversen, and allowed access to letters, scrapbooks, photographs, and many personal effects of Margaret Tobin Brown that had previously been unavailable. The first full-length biography of Margaret Tobin Brown was published in June, 1999.

Margaret Brown has also been depicted in many of the films and television series with varying degrees of realism. She was played by Kathy Bates in the 1997 film Titanic and by Marilu Henner as a sassy bombshell in the 1996 television miniseries of the same name.

The Gemini 3 spacecraft was named Molly Brown by Commander Gus Grissom in reference to his previous spaceflight on Liberty Bell 7 which ended with the Mercury spacecraft sinking during recovery in the Atlantic.

After acquiring their wealth, James and Margaret bought their Denver, Colorado, home (built in 1889) located at 1340 Pennsylvania Street. It was a three-story, Victorian-style house made of Colorado lava stone with sandstone trim. It was typical of the homes built in the surrounding Capitol Hill neighborhood near the turn of the twentieth century. At 7,600 square feet, the home was considered merely an average upper-middle-class home at the time.

The House has been restored to its 1910 appearance. The exhibits illustrate Margaret Brown's life there between 1894 and 1912. Permanent exhibits include early twentieth century furnishings and art objects as well as temporary exhibitions that illuminate various aspects of Victorian era life, from a servant's life to Victorian garments.

Retrieved from https://www.newworldencyclopedia.org/p/index.php?title=Margaret_Brown&oldid=1085951
Categories:
Hidden category:
This page was last edited on 6 November 2022, at 03:54.
Content is available under Creative Commons Attribution/Share-Alike License; additional terms may apply. See Terms of Use for details.