Luis de Góngora y Argote (July 11, 1561 – May 24, 1627) was a Spanish Baroque lyric poet. Góngora and his lifelong rival, Francisco de Quevedo, were the most prominent Spanish poets during the Siglo de Oro, the Golden Era of Spanish Literature. His style is characterized by what was called culteranismo, also known as Gongorism (Gongorismo). This style existed in stark contrast to Quevedo's Conceptismo.

Culteranismo is characterized by a very ornamental, ostentatious vocabulary and a message that is complicated by a sea of metaphors and complex syntactical order. The name blends culto ("cultivated") and luteranismo ("Lutheranism") and was coined by its opponents to present it as a heresy of "true" poetry.

This movement seems to use as many words as possible to convey little meaning or to conceal meaning. It is also associated with Latinized syntax and mythological allusions. Culteranismo existed in stark contrast with conceptismo, another movement of the Baroque period which is characterized by a witty style, games with words, simple vocabulary, and conveying multiple meanings in as few words as possible. The best-known representative of Spanish conceptismo, Francisco de Quevedo, had an ongoing feud with Luis de Góngora in which each criticized the other’s writing and personal life.

Góngora was born to a noble family in Córdoba, where his father, Francisco de Argote, was corregidor, or judge. In a Spanish era when purity of Christian lineage (limpieza de sangre) was needed to gain access to education or official appointments, he adopted the surname of his mother, Leonor de Góngora. She claimed descent from an ancient hidalgo (lesser nobility) family. At the age of 15 he entered the University of Salamanca, where he studied civil law and Canon law. He was already known as a poet in 1585 when Miguel de Cervantes praised him in La Galatea; in this same year he took minor orders, drawing his income from the benefices of Cañete de las Torres and Guadalmazán[1]. His uncle, Don Franscisco, a prebendary of Córdoba Cathedral, renounced his post in favor of his nephew, who took deacon’s orders in 1586.[2]

As a canon associated with this Cathedral, he traveled on diverse commissions to Navarre, Andalusia and Castile. The cities that he visited included Madrid, Salamanca, Granada, Jaén, and Toledo. Around 1605, he was ordained priest, and afterwards lived at Valladolid and Madrid.

While his circle of admirers grew, patrons were grudging in their admiration. Ultimately, in 1617 through the influence of the Duke of Lerma, he was appointed honorary chaplain to King Philip III of Spain, but did not enjoy the honor long.

He maintained a long feud with Francisco de Quevedo, who matched him in talent and wit. Both poets composed numerous bitter, satirical pieces attacking one another, with Quevedo criticizing Góngora's penchant for flattery, his large nose, and his passion for gambling. Some sources say that he was known to be gay, Quevedo even accused his enemy of sodomy, which was a capital crime in seventeenth century Spain. In his "Contra el mismo (Góngora)," Quevedo writes of Gongora: No altar, garito sí; poco cristiano, / mucho tahúr, no clérigo, sí arpía.[3] Góngora's nose, the subject of Quevedo's "A una nariz," begins with the lines: Érase un hombre a una nariz pegado, / érase una nariz superlativa, / érase una nariz sayón y escriba, / érase un peje espada muy barbado.[4]

This angry feud came to a nasty end for Góngora, when Quevedo bought the house he lived in for the only purpose of ejecting him from it. In 1626 a severe illness, which seriously impaired the poet's memory, forced him to return to Cordoba, where he died the next year. By then he was broke from trying to obtain positions and win lawsuits for all his relatives.

An edition of his poems was published almost immediately after his death by Juan López de Vicuña; the frequently reprinted edition by Hozes did not appear until 1633. The collection consists of numerous sonnets, odes, ballads, songs for guitar, and of some larger poems, such as the Soledades and the Fábula de Polifemo y Galatea (Fable of Polyphemus and Galatea) (1612), the two landmark works of the highly refined style called "culteranismo" or "Gongorism." Miguel de Cervantes, in his Viaje del Parnaso, cataloged the good and bad poets of his time. He considered Góngora to be one of the good ones.

Velazquez painted his portrait, and numerous documents, lawsuits and satires of his rival Quevedo paint a picture of a man jovial, sociable, and talkative, who loved card-playing and bullfights. His bishop accused him of rarely attending choir, and of praying less than fervently when he did go.[5] Gongora's passion for card-playing ultimately contributed to his ruin.[6] Frequent allusions and metaphors associated with card-playing in Góngora’s poetry reveal that cards formed part of his daily life.[7] He was often reproached for activities beneath the dignity of a churchman.

Culteranismo existed in stark contrast with conceptismo, another movement of the Baroque period which is characterized by a witty style, games with words, simple vocabulary, and conveying multiple meanings in as few words as possible. The best-known representative of Spanish conceptismo, Francisco de Quevedo, had an ongoing feud with Luis de Góngora in which each criticized the other’s writing and personal life.

The word culteranismo blends culto ("cultivated") and luteranismo ("Lutheranism") and was coined by its opponents to present it as a heresy of "true" poetry. Some criticized culteranismo as "a monster whose vices grammatical poetry lacks all essential elements to be beautiful." (Las Soledades han sido consideradas por los gramáticos y retóricos más eminentes como una lacra que hay que tapar, y se han levantado voces oscuras y torpes, voces sin luz ni espíritu para anatematizar lo que ellos llaman oscuro y vacío.)[8] The movement aimed to use as many words as possible to convey little meaning or to conceal meaning. "Góngora’s poetry is inclusive rather than exclusive," one scholar has written, "willing to create and incorporate the new, literally in the form of neologisms."[9]

Góngora had a penchant for highly Latinate and Greek neologisms, which his opponents mocked. Quevedo lampooned his rival by writing a sonnet, “Aguja de navegar cultos,” which listed words from Gongora’s lexicon: “He would like to be a culto poet in just one day, / must the following jargon learn: / Fulgores, arrogar, joven, presiente / candor, construye, métrica, armonía….”[10] Quevedo actually mocked Gongora’s style in several sonnets, including “Sulquivagante, pretensor de Estolo.”[11] This anti-gongorine sonnet mocks the unintelligibility of culteranismo and its widespread use of flowery neologisms, including sulquivagante (he who plies the seas; to travel without a clear destination); speluncas (“caves”); surculos (sprouts, scions).[12] He was also the first to write poems imitating the speech of blacks.[13]

Góngora also had a penchant for apparent breaks in syntactical flow, as he overturned the limitations of syntax, making the hyperbaton the most prominent feature of his poetry.[14]

As Dámaso Alonso has pointed out, Gongora’s contribution to the Spanish language should not be underestimated, as he picked up what were in his time obscure or little-used words and used them in his poetry again and again, thereby reviving or popularizing them. Most of these words are quite common today, such as "adolescente," "asunto," "brillante," "construir," "eclipse," "emular," "erigir," "fragmento," "frustrar," "joven," "meta," and "porción".[17] 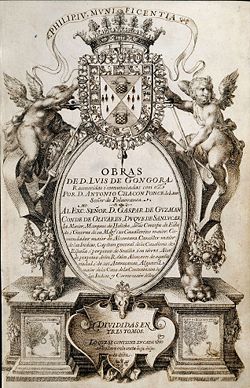 Title page of the Chacon Manuscript.

Góngora's poems are usually grouped into two blocks, corresponding more or less to two successive poetic stages. His Fábula de Polifemo y Galatea (Fable of Polyphemus and Galatea) and his Soledades are his best-known compositions and the most studied.[18] The Fábula is written in royal octaves (octavas reales) and his Soledades is written in a variety of meters and strophes, but principally in stanzas and silvas interspersed with choruses.[19]

Góngora's Fábula de Polifemo y Galatea (1612) narrates a mythological episode described in Ovid's Metamorphoses: the love of Polyphemus, one of the Cyclops, for the nymph Galatea, who rejects him. In the poem's end, Acis, enamored with Galatea, is turned into a river.[20]

Although Góngora did not publish his works (he had attempted to do so in 1623), manuscript copies were circulated and compiled in cancioneros (songbooks), and anthologies published with or without his permission. In 1627, Juan Lopez Vicuña published Verse Works of the Spanish Homer, which is also considered very trustworthy and important in establishing the Gongorine corpus of work. Vicuña's work was appropriated by the Spanish Inquisition and was later surpassed by an edition by Gonzalo de Hozes in 1633.

Góngora's Legacy and the Generation of '27

From 1923 to 1927 a group of lyrical poets gathered in Spain, drawn together by ideas about art and poetry.[22]The Generation of '27 took its name from the year in which the tricentary of Góngora's death, ignored by official academic circles, was celebrated with recitals, avant-garde happenings, and an ambitious plan to publish a new critical edition of his work, as well as books and articles on aspects of his work that had not been fully researched.[23].

The Generation of '27 was the first to attempt to self-consciously revise baroque literature.[24] Dámaso Alonso wrote that Góngora’s complex language conveyed meaning in that it created a world of pure beauty.[25] Alonso explored his work exhaustively, and called Góngora a “mystic of words.”[26] Alonso dispelled the notion that Góngora had two separate styles—one “simple” and another “difficult”—that were also divided chronologically between his early and later years. He argued that Góngora’s more complex poems built on stylistic devices that had been created in Góngora’s early career as a poet. He also argued that the apparent simplicity of some of Góngora’s early poems is often deceptive.[27]

Rafael Alberti added his own Soledad tercera (Paráfrasis incompleta)[28]. In 1961, Alberti declared: “I am a visual poet, like all of the poets from Andalusia, from Góngora to García Lorca.”[29]

Lorca presented a lecture called "La imagen poética en don Luís de Góngora" at the Ateneo in Seville in 1927.[30] In this lecture, Lorca paid Jean Epstein the compliment of comparing the film director with Góngora as an authority on images.[31]