Louis-Antoine, comte de Bougainville (November 12, 1729 - August 31, 1811) was a French navigator and military commander. He was also a marked mathematician and a loyal statesman of his native France. As did Marquis de Lafayette Bougainville participated in both the American and French Revolutions, believing in the values of democracy. He was also an acquaintance of Napoleon during his lifetime. On Falkland Island, Bougainville helped to establish a colony that was later confiscated by the Spanish. He also was able to make a journey around the world by sea during his lifetime. Geographical landmarks and plant species have been named after Bougainville posthumously.

Bougainville saw human rights as the property of all. All people, not only the French, should enjoy liberty, equality, brotherhood/sisterhood. His belief in democratic freedom saw him fight for the rights of people in two nations, although in the United States and in France women were not given rights and in the U.S. some men and women remained in slavery, with no rights at all. France abolished slavery in 1794. In 1791, it became the first European country to grant Jews full civil and political rights. As more and more people make the world the theater of their actions, working to improve all lives, the human race may finally realize that people are equally valuable, that all are inter-dependent, that when one suffers, all suffer. Perhaps he traveled and explored the world because he knew that humanity has only one home, and needs to master how the planet works in order to ensure that it remains a viable, healthy habitat.

Bougainville was born in Paris, the son of a notary, on either November 11 or 12, 1729. In early life, he studied law, but soon abandoned the profession, and in 1753 entered the army in the corps of musketeers. At the age of twenty-five, he published a treatise on the integral calculus, as a supplement to De l'Hôpital's treatise, Des infiniment petits.

In 1755, he was sent to London as secretary to the French embassy, and was made a member of the Royal Society.

In 1756, he went to Canada as captain of dragoons and aide-de-camp to the Marquis de Montcalm.[1] He took an active part in the capture of Fort Oswego in 1756 and in 1757 at the Battle of Fort William Henry.[2] He was wounded in 1758 at the successful defense of Fort Carillon. He sailed back to France the following winter, under orders from the marquis to obtain additional military resources for the colony; during this crossing, he continued familiarizing himself with the ways of the sea, skills that would later serve him well. Having distinguished himself in the war against Britain, he was rewarded with the cross of St Louis and returned to Canada the following year with the rank of colonel, but with few supplies to show for his trip—the metropolitan authorities having decided that "When the house is on fire, one does not worry about the stables." 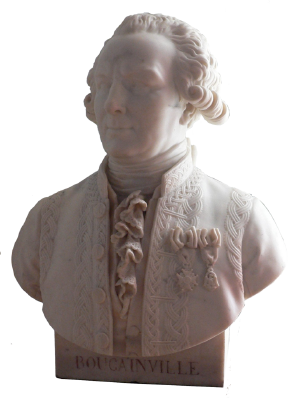 During the pivotal year of 1759, he participated in the defense of the capital of New France, the fortified Quebec City. With a small elite troop under his command, among which the Grenadiers and the Volontaires à cheval, he patrolled the north shore of the St. Lawrence River, upstream from the city, all summer long stopping the British several times from landing and thus cutting communications with Montreal. He was not given sufficient time, however, to rally his troops and attack the British rear when they successfully climbed up to the Plains of Abraham and attacked Quebec on September 13.

Following the death of the Marquis de Montcalm and the fall of Québec on September 18—after the colonel's aborted attempt to resupply the besieged city—Bougainville was dispatched to the western front by his new commanding officer, the Chevalier de Lévis and attempted to stop the British advance from his entrenchments at Île-aux-Noix, Quebec. He was among the officers who accompanied Lévis to Saint Helen's Island off Montreal for the last French stand in North America before the general capitulation of 1761.

Shipped back to Europe along with the other French officers, all deprived of military honors by the victors, Bougainville was prohibited from taking up any further active duty against the British under the terms of surrender. He spent the remaining years of the Seven Years' War (1761 to 1763) as a diplomat and helped negotiate the Treaty of Paris that eventually conceded most of New France to the British Empire. 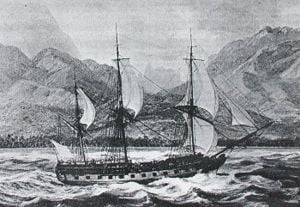 After the peace, when the French government conceived the project of colonizing the Falkland Islands, Bougainville undertook the task at his own expense. But the settlement he established, Port St. Louis, excited the jealousy of Britain and the French government, trying to get Spain involved in resisting the British, sold the Islands to the Spanish on condition that they could use them as a stepping-stone to the Pacific.

Port Louis is named after him.

In 1766, Bougainville received from Louis XV permission to circumnavigate the globe. He would become the 14th navigator in western history, and the first Frenchman, to sail around the world, and the completion of his mission would bolster the prestige of France following its defeats during the Seven Years' War. Bougainville left Nantes on November 15, 1766 with two ships: La Boudeuse and the Étoile. On board was the botanist Philibert Commerçon and his valet, later unmasked by the ship's surgeon as Jeanne Baré, Commerçon's mistress; she would become the first woman to circumnavigate the globe.

He saw islands of the Tuamotu group on the following March 22, on April 2 saw the peak of Mehetea and famously visited the island of Otaheite shortly after and narrowly missed becoming their discoverer, unaware of a previous visit, and claim, by Samuel Wallis in HMS Dolphin less than a year previously. He claimed the island for France and named it New Cythera.[3]

They left Tahiti and sailed westward to southern Samoa and the New Hebrides, then on sighting Espiritu Santo turned west still looking for the Southern Continent. On June 4, he almost ran into heavy breakers and had to change course to the north and east. He had almost found the Great Barrier Reef. He sailed through what is now know as the Solomon Islands that, due of the hostility of the people there, he avoided. He named Bougainville Island for himself. The expedition was attacked by people from New Ireland, so they made for the Moluccas. At Batavia they received news of Wallis and Carteret, who had preceded Bougainville.

On March 16, 1769, the expedition completed its circumnavigation and arrived at St Malo, with the loss of only seven out of upwards of 200 men, an extremely low level of casualty, and a credit to the enlightened management of the expedition by Bougainville. His voyage of circumnavigation was also notable for being the first to include a woman, Jeanne Baret.

Describing Tahiti in his 1771 book, Voyage autour du monde, Bougainville offered a vision of an earthly paradise where men and women live happily in innocence, away from the corruption of civilization. His description powerfully illustrated the concept of the noble savage, and influenced the utopian thoughts of philosophers such as Jean-Jacques Rousseau before the advent of the French Revolution. Denis Diderot's book, Supplément au voyage de Bougainville, retells the story of Bougainville's landing on Tahiti, narrated by an anonymous reader to one of his friends: This fictional approach to Bougainville's expedition, along with the description of the Tahitians as noble savages, is meant to criticize Western ways of living and thinking.

After an interval of several years, Bougainville again accepted a naval command and saw much active service between 1779 and 1782, including participating in the Battle of the Chesapeake. In the memorable engagement of the Battle of the Saintes, in which Admiral George Rodney defeated the Comte de Grasse, Bougainville, who commanded the Auguste, succeeded in rallying eight ships of his own division, and bringing them safely into Saint Eustace. He was promoted to chef d'escadre and, on reentering the army, was given the rank of maréchal de camp.

After the peace of 1783, he returned to Paris, and obtained the place of associate of the Academy. He projected a voyage of discovery towards the North Pole but this did not meet with support from the French government.

In 1787, he became a member of the French Academy of Sciences. He obtained the rank of vice-admiral in 1791; and in 1794, having escaped from the Reign of Terror, he retired to his estate in Normandy. Returning to Paris, he was one of the founding members of the Bureau des Longitudes. In 1799, Napoleon I made him a senator, and in 1808, a count of the Empire and member of the Legion of Honour. He died in Paris on the August 31, 1811. He was married and had three sons, who all served in the French army.

Bouganville was dedicated to the ideals of democracy as is evident in his participation in the American and French revolutions. Bougainville's name is given to the largest of the Solomon Islands; and to the strait which divides it from the island of Choiseul. It is also applied to the strait between Mallicollo and Espiritu Santo islands of the New Hebrides group. In the Falklands, Port Louis, and "Isla Bougainville" (Lively Island's Spanish name) commemorate him.

The genus of South American climbing shrubs with colorful bracts, Bougainvillea, is named after him.

Thirteen ships of the French Navy have been named in his honor.