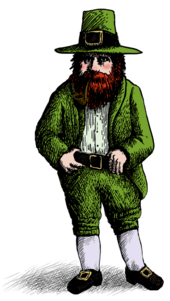 A stereotypical depiction of a leprechaun of the type popularized in the twentieth century.

The most famous, recognizable, and misrepresented symbol of Irish mythology is the leprechaun. These mythical creatures have origins stretching back to before the arrival of the Celts. The leprechaun has come a long way from a species of faerie to an almost cartoonish caricature of Irish culture that can both celebrate and belittle the Irish. Nonetheless, the leprechaun remains an example of creatures who exist both in the physical world, yet have some mystery attached to them, some ability or nature that transcends the world we know, suggesting the existence of creatures and a world beyond this physical realm.

A leprechaun is shown crafting shoes in this engraving made in 1858.

There are a number of possible etymologies of the name "leprechaun." One of the most widely accepted theories is that the name comes from the Irish Gaelic words leipreachán and 'luchorpán, both of which overlap in definition as "pygmy, a sprite." The Oxford English Dictionary states an alternate origin as being leath bhrógan, meaning shoe-maker—the leprechaun is known as the fairy shoemaker of Ireland and is often portrayed working on a single shoe.[1]

The word leprechaun’s first recorded use in the English language was in 1604 in Middleton and Dekker's The Honest Whore as lubrican. The original meaning was of some kind of spirit and not specifically associated with the Irish mythological character.[2]

The leprechaun originally had a different appearance depending on where in Ireland he was found. Prior to the twentieth century, it was generally agreed that the leprechaun wore red and not green. Samuel Lover, writing in 1831 describes the leprechaun as,

…quite a beau in his dress, notwithstanding, for he wears a red square-cut coat, richly laced with gold, waistcoat and inexpressible of the same, cocked hat, shoes and buckles.

William Butler Yeats, in his 1888 book entitled Fairy and Folk Tales of the Irish Peasantry described the leprechaun as follows:

He is something of a dandy, and dresses in a red coat with seven rows of buttons, seven buttons on each row, and wears a cocked-hat, upon whose pointed end he is wont in the north-eastern counties, according to McAnally, to spin like a top when the fit seizes him.[3]

In a poem entitled The Leprechaun; or, Fairy Shoemaker, the eighteenth-century Irish poet William Allingham described the appearance of the leprechaun as:

A wrinkled, wizen'd, and bearded Elf,


Spectacles stuck on his pointed nose,
Silver buckles to his hose,

Some suggest that Allingham is in fact responsible for the modern image of the leprechaun, a small man with a red beard, an emerald green hat fronting a golden four-leaf clover, and a suit with a large buckle on its belt. This is the widespread conception of the leprechaun, particularly in the United States where this image evokes the idea of good luck.

A leprechaun counts his gold, in this engraving circa 1900.

One of the purported origins of leprechaun myths comes from the many "faerie forts" or "faerie rings," earthworks and drumlins found in Ireland that predate the Celtic occupation, and is connected to the belief in the Tuatha Dé Danann ("peoples of the goddess Danu") and other quasi-historical races said to be the original inhabitants of the island. At some point in Ireland's history, the leprechaun became a distinguishable entity from the other mythical creatures, the faeries, recognized as taking the form of a small, old man who was sly and lived in solitude, although they were also sometimes believed to be mischievous. By trade they were cobblers or shoemakers for other types of faeries, but were never seen making more than one shoe.

Early on they were connected to hidden wealth, having many buried treasure crocks that they guarded with their cunning and wit; however, the leprechaun seemed to be vulnerable to direct attention by a human: if anyone kept an eye fixed upon one and interrogated him thoroughly, the leprechaun could not escape and would eventually be forced to divulge the location of the gold. However, if the human looked away, for just a moment, the leprechaun would escape.[1]

Leprechauns rarely appear in what would be classed as a folk tale; in almost all cases the interest of these stories centers on a human hero. Stories about leprechauns are generally very brief and generally have local names and scenery attached to them. The tales are usually told conversationally as any other occurrence might be told, whereas there is a certain solemnity about the repetition of a folk-tale proper.

Many tales present the leprechaun as outwitting a human, as in the following examples:

A farmer or young lad captures a leprechaun and forces him to reveal the location of his buried treasure. The leprechaun assures him that the treasure is buried in an open field beneath a particular ragwort plant. The farmer ties a red ribbon to the plant, first extracting a promise from the leprechaun not to remove the ribbon. Releasing the leprechaun, he leaves to get a shovel. Upon his return he finds that every weed in the field has been tied with an identical red ribbon, thus making it impossible to find the treasure.[5] [6]

In another story, a young girl finds a leprechaun and bids him show her the location of his buried money. She takes him up in her hand and sets out to find the treasure, but all of a sudden she hears a loud buzzing behind her. The leprechaun shouts at her that she is being chased by a swarm of bees, but when she looks around there are no bees and the leprechaun has vanished.[7] 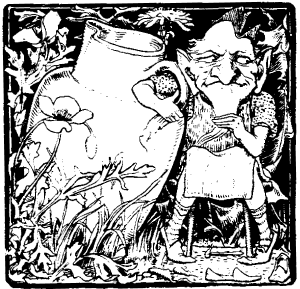 A representation of a Clurichaun in T. C. Croker's Fairy Legends and Traditions of the South of Ireland. Clurichauns are often confused with leprechauns.

In other stories they are told of riding shepherds' dogs through the night, leaving the dogs exhausted and dirty in the morning, although such tales are more typical of the Clurichaun.

The clurichaun ("Kloo'-ra-kahn"), or clobhair-ceann, is an Irish fairy that resembles the leprechaun. Some even describe the clurichaun as a night "form" of the leprechaun, who goes out to drink after finishing his daily chores.[8] Some folklorists regard them as regional variations on the same creature.[9]

Clurichauns are said to be always drunk. However, unlike their cousins, they are surly. Clurichauns enjoy riding sheep and dogs at night. If a person treats them well they will protect that person’s wine cellar. If mistreated, though, they will wreak havoc on a person’s home and spoil their wine stock. In some tales, they act as "buttery spirits," plaguing drunkards or dishonest servants who steal wine; if the victim attempts to move away from their tormenter, the clurichaun will hop into a cask to accompany them.[10]