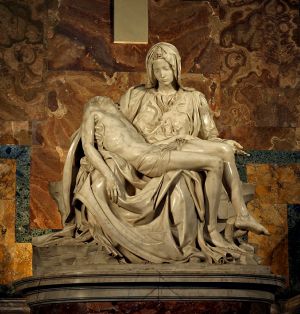 Pietà, Michelangelo, 16th c. Jesus' mother Mary holds the body of her dead son, whose life was offered as a sacrifice.

Kenosis (from the Greek κένωσις: meaning "emptying") is an ancient Greece|ancient Greek]] term found primarily in Christian writings, such as the Epistle to the Philippians 2:7, where Jesus is described as having "...emptied himself..." (NRSV) to become a servant of humankind. This paradoxical idea of God's "emptying" of Himself to become full of love has intrigued the curiosity of countless theologians, and in the process shaped the development of Christian theology and ethics. Christians have interpreted kenosis as meaning Jesus' sublime humility during the incarnation and complete sacrifice for all, which is simultaneously a call for Christians to be similarly humble and subservient to others.

The topic of kenosis was revived in the nineteenth century to reinterpret classical doctrines of the incarnation.

The ancient Greek word κένωσις kénōsis means an "emptying," from κενός kenós "empty." The word is mainly used, however, in a Christian theological context, for example Philippians 2:7, "Jesus made himself nothing (ἐκένωσε ekénōse) ..." (NIV) or "...he emptied himself..." (NRSV), using the verb form κενόω kenóō "to empty."

In Literature and Poetics

In Christian theology, Kenosis is the concept of the 'self-emptying' of one's own will to become entirely receptive to God's perfect will. It is used both as an explanation of the incarnation, and an indication of the nature of God's activity.

The doctrine of Kenosis attempts to explain what the Son of God chose to give up in terms of his divine attributes, or divinity, in order to assume human nature. Specifically, it refers to attributes of God that are thought to be incompatible with becoming fully human. For example, God's omnipotence, omnipresence, omniscience as well as his aseity, eternity, infinity, impassibility and immutability. An apparent dilemma arises when Christian theology posits a God outside of time and space, who enters into time and space to become human (incarnate). Since the incarnate Jesus is simultaneously fully human and fully divine, Kenosis holds that these changes were temporarily assumed by God in his incarnation, and that when Jesus ascended back into heaven following the resurrection, he fully reassumed all of his original attributes and divinity.

Theologians who support this doctrine often appeal to a reading of Philippians 2:5-8. Critics of Kenosis theology argue that the context of Philippians 2:5-8 is referring to Jesus voluntarily taking the form of a servant to conceal his divine glory (revealed temporarily in the Transfiguration), or to forsaking his place and position in heaven to dwell among men, as opposed to forsaking his divine attributes or nature.

Kenotic Christology focuses on certain passages in the Gospels where Jesus questions his being called good (Mark 10:18, Luke 18:19, Matthew 19:17), and evidence that he was not omniscient concerning the date of the Second Advent (Mark 13:32, Matthew 24:36).

The most important passage for discussions of kenosis is Phillipians 2:7 where the writer of the epistle urges believers to imitate Christ's self-emptying. In this interpretation, Paul was not primarily putting forth a theory about God in this passage, rather he was using God's humility exhibited in the incarnation event as a call for Christians to be similarly subservient to others.

Eastern Orthodox mystical theology emphasizes following the example of Christ. Kenosis is only possible through humility and presupposes that one seeks union with God. Kenosis, relative to the human nature, denotes the continual epiklesis and self-denial of one's own human will and desire. With regards to Christ, there is a kenosis of the Son of God, a condescension and self sacrifice for the redemption and salvation of all mankind. Mankind can also participate in God's saving work through theosis; becoming holy by grace.

Therefore, in Eastern Orthodoxy, theosis never concerns becoming like God in nature or essence, which is pantheism; instead, it concerns becoming united to God by grace, through his Energies. Orthodox theology distinguishes between divine Essence and Energies. Kenosis therefore is a paradox and a mystery since "emptying oneself" in fact fills the person with divine grace and results in union with God.

Another perspective is the idea that God is self-emptying. He poured out himself to create the cosmos and the universe, and everything within it. Therefore, it is our duty to pour out ourselves. (This is similar to C.S. Lewis's statement in Mere Christianity that a painter pours his ideas out in his work, and yet remains quite a distinct being from his painting.) In so doing, we become deified like God. Another term for this process is theosis. Kenosis is not only a Christological issue in Orthodox theology, it has moreover to do with Pneumatology, namely to do with the Holy Spirit.

The concept of kenosis is also a prominent topic in Buddhist-Christian dialogue where it is compared to the Buddhist notion of sunyata (emptiness).[1] Participants in these dialogues have noted that both Christian and Buddhist scriptures encourage their followers to reduce their egos and to embrace a spirit of humility in their relationships with others.

The concepts of kenosis and sunyata have also been invoked as indicative of the pathway to spiritual understanding. In this regard, mystical theologian John of the Cross' work "Dark Night of the Soul" is seen as a particularly lucid explanation of the paradoxical process of emptying oneself to become full.