The Kathmandu Valley (Nepal Bhasa: नेपाः स्वनिगः Nepāḥ Svānigaḥ), located in Nepal, lies at the crossroads of ancient civilizations of Asia. UNESCO designated Kathmandu valley a World Heritage Site in 1979. It has at least 130 important monuments, including several places of pilgrimage for the Hindus and the Buddhists. Kathmandu District, Lalitpur District and Bhaktapur District make up the valley, which consists of Kathmandu Metropolitan City, Lalitpur Submetropolitan City, Bhaktapur municipality, Kirtipur Municipality, and Thimi Municipality. Several villages present a high style of Newar art and architecture. The valley serves as a cultural and political hub of Nepal. A mixture of cultures, many recently arrived from different parts of Nepal, Newar culture still exist vibrantly. The Bagmati river flows through Kathmandu Valley.

The valley has a history of human habitation dating to at least 300 B.C.E. Lying between the important regions of India, Pakistan, Tibet, and China, Kathmandu Valley has been a cross-roads for civilizations in the region. The Newa people have the longest continuous history in the valley. They created the religious architecture throughout the region. Their art and religious teaching have given the area its culture. Other ethnic groups have migrated into the Kathmandu Valley, finding a welcome, still the Newa people have the primary influence on culture and the way of life. They have placed their stamp on the cuisine, festivals and rituals, dance, and music. 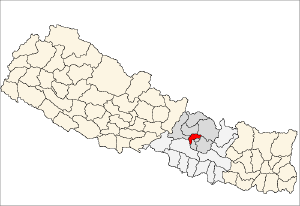 Kathmandu (Nepali: काठमांडौ, Nepal Bhasa: येँ) serves as the capital and the largest city of Nepal. It is situated in Kathmandu Valley which also contains two other cities: Patan and Bhaktapur. The city, the most developed city in Nepal, stands at an elevation of 4,500 ft (1,400 m), with a population of 700,000 people.

The city of Kathmandu received its name from a structure in Durbar Square called Kaasthamandap. In Sanskrit, Kaasth (काष्ठ) = "wood" and Mandap (मंडप/मण्डप) = "covered shelter." King Laxmi Narsingh Malla built that unique temple, also known as Maru Sattal, in 1596 C.E. The entire structure contains no iron nails or supports and is made entirely from wood. Legend has it that the timber used for this two story pagoda was obtained from a single tree. Kathmandu is also sometimes called "Kantipur." Newars, the native people of the Kathmandu valley use the original term from Nepal Bhasa, Yne. 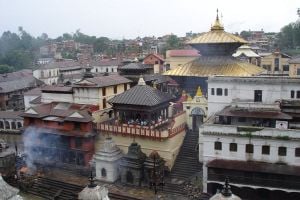 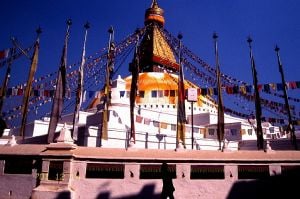 Kathmandu serves as home to most of the government offices, embassies, corporate houses, and the palace. The old palace of Newar kings, Kathmandu Durbar Square, listed as UNESCO world heritage site, stands in Basantapur, next to Freak Street, a popular hippie spot during the seventies. The Shah King's Palace stands right next to Thamel, the tourist hub of the country. Thamel consists of two parallel streets just to the west of the palace, serving as home to different hotels, ranging from different stars. The palace sits at the head of Durbar Marg, a street lined with various shops. Most of the streets in Kathmandu receive names from Nepal Bhasa, owing its origin to the rich Newari Culture and heritage.

The "old" city has won note for its numerous Buddhist and Hindu temples and palaces, most dating to the seventeenth century. Many of those landmarks have been damaged by earthquakes and pollution. Kathmandu has been popular with western tourists since the 1960s when it became a key stop on the hippie trail, when Jho: Chheen (Nepal Bhasa, continuous house) (Freak Street) became a main location. Rumors prevail that many rock singers used to visit Jho: Cheen and downtown Kathmandu in search of tranquility and Nirvana.

According to Swayambhu Puran, Kathmandu Valley had been once a lake. The hill where the Swambhu stupa rests, had lotus plants with beautiful lotus flowers abloom. One story says that the god Manjushree cut a gorge at a place called Kashapaal (later called Chobhar) with a sword called Chandrahrasha and drained away the waters to establish a habitable land. According to Gopal Banshawali, Krishna cut the gorge with his Sudarshana Chakra to let the water out. He then handed the drained valley to the Gopal Vansi people, nomadic cow herders.

The Kathmandu Valley may have been inhabited as early as 300 B.C.E., the oldest known artifacts in the valley date to a few hundred years B.C.E. The earliest known inscription in the Kathmandu Valley dates to 185 C.E. The oldest firmly dated building in the earthquake-prone valley is almost 1,992 years old. Four stupas around the city of Patan said to have been erected by Charumati, a purported daughter of Ashoka the Great, a Mauryan king, in the third century B.C.E., attest to the ancient history present within the valley. As with the tales of the Buddha's visit, no evidence supports Ashoka's visit, but the stupas probably date to that century. 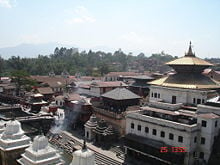 The temple of Pashupatinath

The Kirats constitute the first documented rulers of the Kathmandu Valley, the remains of their palace located in Patan near Hiranyavarna Mahavihara (called "Patukodon"). The Licchavi Dynasty, whose earliest inscriptions date back to 464 C.E., stands as the next rulers of the valley, having close ties with the Gupta Dynasty of India. The Malla Dynasty ruled Kathmandu Valley and the surrounding area from the twelfth century C.E. till the seventeenth century C.E. At that time, the Shah Dynasty under Prithvi Narayan Shah conquered the valley, creating present-day Nepal. Most of ancient Nepali architecture present in Nepal dates from the Malla era.

The Newars, generally acknowledged as the original habitants of the valley, descended from various ethnic and racial groups that have inhabited and ruled the valley during its two millennia history. In today's state of Nepal, the Newars stand apart ethnically from the other groups on the basis of their composite Hindu-Buddhist religious culture. All Newars speak Nepal Bhasa as their mother tongue.The multifarious castes in the numerous caste systems within Newar society betray a surprising racial diversity. The similarities between the various cultural traits and complexes within Newar culture, and those of many other ethnic groups in the Indian sub-continent, lead us to hypothesize the occurrence of both vibrant circulations of peoples and cultures around the sub-continent during the last two millennia. Indologists/anthropologists and Newarologists describe Newar society as racially Mongoloid, culturally Indo-Aryan. 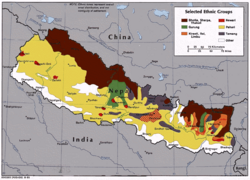 The valley hosts an UNESCO World Heritage Sites composed by seven different Monument Zones: The centers of the three primary cities, Kathmandu Hanuman Dhoka, Patan and Bhaktapur, the two most important Buddhist stupas, Swayambhunath and Boudhanath and two famous Hindu shrines, Pashupatinath temple and Changu Narayan. Since 2003 the site has been inscribed in the World Heritage List as being "in danger" out of concern for the ongoing loss of authenticity and the outstanding universal value of the cultural property.

Other important monuments of Kathmandu valley include:

Retrieved from https://www.newworldencyclopedia.org/p/index.php?title=Kathmandu_Valley&oldid=1081047
Categories:
Hidden category:
This page was last edited on 5 October 2022, at 17:14.
Content is available under Creative Commons Attribution/Share-Alike License; additional terms may apply. See Terms of Use for details.