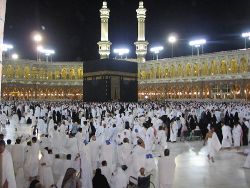 Masjid al Haram in Mecca, with the Ka'bah in the center.

The Kaabah, Kaaba or Ka'bah (Arabic: الكعبة meaning: "Cube") is a building located inside Islam's holiest mosque (al-Masjidu’l-Ḥarām) found in Mecca, Saudi Arabia. The Ka'bah is also called, al-Baytu’l-Ḥarām (البيت الحرام "The Sacred House"). For the Muslim community, the Ka'bah holds a place analogous to that of the Temple Mount in Jerusalem for Jews.[1] The Ka'bah can be called the holiest place in Islam.

Muslims face the Ka'bah during their daily prayers. In the Hajj (pilgrimage), Muslims also perform ritual circumambulation around the Ka'bah.[1]

Physical attributes and location of the Ka'bah

Did you know?
"Ka'bah" comes from the Arabic word "muka'ab" meaning cube

The Ka'bah is a large masonry structure roughly the shape of a cube. The name Ka'bah comes from the Arabic word "muka'ab" meaning "cube." It is made of granite from the hills near Mecca, and stands upon a ten inch marble base, which projects outwards about a foot.[1] The most current dimensions for the structure are: 15 m high (49') with sides measuring 10.5 m (34') by 12 m (39').[2]

It is covered by a black silk curtain decorated with gold-embroidered calligraphy. This cloth is known as the kiswah; it is replaced yearly.[3] The Shahada is outlined in the weave of the fabric. About two-thirds of the way up runs a gold embroidered band covered with Qur'anic text.

At the eastern corner of the Ka'bah is the Rukn-al-Aswad (the Black Stone or al-Ħajaru l-Aswad), which according to Islamic lore, was the spot where Abraham was going to sacrifice his son before being stopped by Allah (God). The stone is generally thought to be a meteorite; at the northern corner lies the Rukn-al-Iraqi ('The Iraqi corner'); at the west lies Rukn-al-Shami ('The Levantine corner') and at the south Rukn-al-Yamani ('The Yemeni corner').

Entrance to the inside of the Ka'bah is gained through a door set seven feet above the ground on the north-eastern wall of the Ka'bah, which acts as the façade.[1] It is accessed by a wooden staircase on wheels, usually stored between the arch-shaped gate of Banu Shaybah and the Zamzam. Inside the Ka'bah, there is a marble floor. The interior walls are clad with marble half-way to the roof; tablets with Qur'anic inscriptions are inset in the marble. The top part of the walls is covered with a green cloth decorated with gold embroidered Qur'anic verses. The building is believed to be otherwise empty. Caretakers perfume the marble cladding with scented oil, the same oil used to anoint the Black Stone outside.

Although not directly connected to it, there is a semi-circular wall opposite the north-west wall of the Ka'bah, known as the hatīm. It is three feet in height and five in length, and is composed of white marble. It is thought by some that this space bears the graves of prophet Ishmael and his mother Hagar.[1]

Muslims throughout the world face the Ka'bah during prayers. For most places around the world, coordinates for Mecca suffice. However, in the Sacred Mosque, worshippers pray in concentric circles radiating outwards around the Ka'bah. Therefore, the focus point is in the middle of the Ka'bah.

History of the Ka'bah

Apart from Islamic traditions, there is very little known about the history of the Ka'bah. It is presumed to have existed before the Islamic era due to the geographer Ptolemy's mention of Mecca (under the name of Macoraba) in the second century.[4] According to German historian Eduard Glaser, the name "Ka'bah" may have been related to the southern Arabian or Ethiopian word "mikrab," signifying a temple. The accounts of the pre-Islamic campaign of Abraha, the Axumite king who had set out to destroy the Ka'bah, suggest the existence and worship of the Ka'bah, although this says little about its appearance or associated equipment at that time.[4] 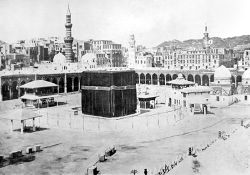 According to Islamic tradition, God ordained a place of worship on Earth to reflect the house in heaven called al-Baytu l-Maˤmur[5] (Arabic: البيت المعمور ). Muslims believe that Adam was the first to build such a place of worship. According to the Qur'an, the Kaaba was built by Ibrahim (Abraham) and his son Ismail (Ishmael).

Muslims believe that at the time of Muhammad, his tribe, the Quraysh, was in charge of the Ka'bah, which was at that time a shrine to numerous Arabian tribal gods. Desert tribesmen, the Bedouin, and inhabitants of other cities would join the annual pilgrimage, to worship and to trade. Caravan-raiding, common during the rest of the year, was suspended during the pilgrimage; this was a good time, then, for travel and trade.

The Qur'an describes Mecca as a barren wadi (Arabic: واد غير ذي زرع) where life is tough and resources scarce. Indeed, there is no evidence that Mecca was anything but a center of local trade and worship (Crone, 1987).

Muhammad, preaching the doctrine of monotheism and the promise of the Day of Judgment, faced mounting opposition in the city of Mecca. The Quraysh persecuted and harassed him continuously, and he and his followers eventually migrated to Medina in 622 C.E. After this pivotal migration, or Hijra, the Muslim community became a political and military force. In 630 C.E., Muhammad and his followers returned to Mecca as conquerors and the Ka'bah was re-dedicated as an Islamic house of worship. Henceforth, the annual pilgrimage was to be a Muslim rite, the Hajj.

It is also claimed by the Shi'a Muslims that the Ka'bah is the birth place of Ali ibn Abi Talib, the fourth caliph and the cousin and son-in-law of the Islamic prophet Muhammad.

The cleaning of the Kaaba

The keys to the Ka'bah are held by the Banī Shaybat (بني شيبة) tribe. Members of the tribe greet visitors to the inside of the Ka'bah on the occasion of the cleaning ceremony. A small number of dignitaries and foreign diplomats are invited to participate in the ceremony. The governor of Mecca leads the honored guests who ritually clean the structure, using simple brooms.

The Qibla and prayer 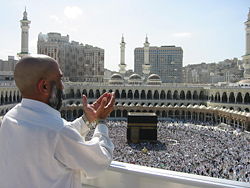 For any reference point on the Earth, the Qibla is the direction to the Kaaba. Muslims are ordered to face this direction during prayer (Qur'an 2:143-144). While it may appear to some non-Muslims that Muslims worship the Ka'bah, the Ka'bah is simply a focal point for prayer, in a similar fashion to the cross for Christians or the Western Wall for Jews.

The earliest Muslims prayed towards Jerusalem. According to Islamic tradition, when Muhammad was praying in the Al-Qiblatain mosque (in Medina), he was ordered by God to change the qibla direction from Jerusalem to Mecca and the Ka'bah. Various theories are advanced as to the reason for the change.

Muslim groups in the United States differ as to how the qibla should be oriented; some believe that the direction should be calculated as a straight line drawn on a flat map, like the familiar Mercator projection of the globe; others say that the direction is determined by the shortest line on the globe of the earth, or a great circle. At times this controversy has lead to heated disputes. Flat-map Muslims in the United States pray east and slightly south; great-circle Muslims face in a north-easterly direction. In both cases, the exact orientation will vary from city to city.

Some Muslims carry qibla compasses that tell them which direction to face no matter where they are. This method requires one to align the north arrow with a particular point on the compass corresponding to one's location. Once so aligned, one simply turns toward the direction indicated by the compass's Qibla pointer, which is often in the shape of a minaret.