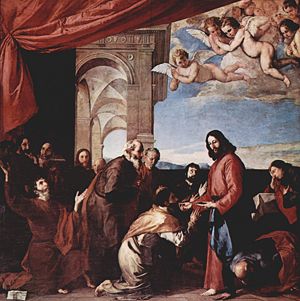 Jusepe de Ribera (January 12, 1591 – 1652) was a Spanish Tenebrist painter and printmaker, also known as José de Ribera in Spanish and as Giuseppe Ribera in Italian. He was also called by his contemporaries and early writers Lo Spagnoletto, or "the Little Spaniard."

Ribera was a leading painter of the Spanish school, although his mature work was all done in Italy. Ribera's works were Spanish influenced in content and Italian inspired in technique. He became a success using Tenebrism, from the Italian tenebroso ("murky"), a style of painting using violent contrasts of light and dark. A heightened form of chiaroscuro, it creates the look of figures emerging from the dark.

Ribera was inventive in his subject matter, ranging through visionary spectacles, biblical themes, genre, portraits, mythological subjects, and portraits of ascetics and penitents. His use of line, color and shadow emulated the Italianate Baroque style of Caravaggio.[1]

He was one of the few seventeenth-century Spanish artists to produce numerous drawings, and his etchings were among the finest produced during the Baroque period. The subject of the martyred saint was a prevalent theme in Spanish Baroque art, which was devoted to the religious policies and goals of the Catholic Church. His paintings and prints were frequently devoted to themes of saints and religious events reflecting the spiritual intensity and mysticism of the Spanish Counter-Reformation.

Ribera was born near Valencia, Spain at San Felipe de Játiva, now named Xàtiva. His father was a shoemaker and apparently his parents intended for him to be a scholar but he neglected these studies and is said to have apprenticed with the Spanish painter Francisco Ribalta in Valencia, although no proof of this connection exists. Longing to study art in Italy, he made his way to Rome via Parma, where he painted an altarpiece for the Church of San Prospero in 1611, and he completed a painting on the subject of Jacob's Ladder, now in the Prado Museum, in Madrid.

Ribera lived in Rome from 1613-16, on the Via Margutta, and associated with students of Caravaggio, including Gerrit van Honthorst and Hendrik ter Brugghen. He then moved to Naples and remained there the rest of his life. The Kingdom of Naples was then part of the Spanish Empire, and ruled by a succession of Spanish Viceroys. Ribera's Spanish nationality aligned him with the small Spanish governing class in the city, and also with the Flemish merchant community, from another Spanish territory, who included important collectors of and dealers in art. Ribera began to sign his work as Jusepe de Ribera, Español or Jusepe de Ribera, Spaniard. He was able quickly to attract the attention of and commissions from the Viceroy, the Duke of Osuna, also recently arrived. 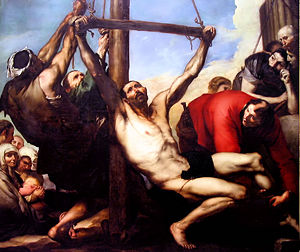 The period after Osuna was recalled in 1620 seems to have been a difficult time for de Ribera. Few paintings survive from 1620 to 1626; but this was the period in which most of his best prints were produced. These were at least partly an attempt to attract attention from a wider audience than Naples. His career picked up in the late 1620s, and he was accepted as the leading painter in Naples thereafter.

The Academy of St. Luke in Rome elected de Ribera to membership in 1625, and six years later he became a knight of the Papal Order of Christ of Portugal, but he was unsuccessful in obtaining a coveted Spanish knighthood. 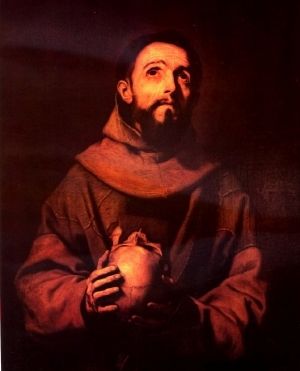 His earliest style, founded sometimes on Caravaggio and sometimes on the wholly diverse method of Correggio, can be traced to the study of Spanish and Venetian masters. Along with his massive and predominating shadows, he retained from first to last a great strength in local coloring. His forms, though ordinary and sometimes coarse, are correct; the impression of his works gloomy and startling.

Ribera's career in Naples is highlighted by several commissions for the monastic complex of Certosa di San Martino. Initially, from 1638 to 1643, he painted a series of prophets for the facade interior and side chapels of the church. Later, in 1651, he completed a large picture, the Communion of the Apostles, for the choir in the same church.[2]

In the early 1630s his style changed away from strong contrasts of dark and light to a more diffused and golden lighting. Salvator Rosa and Luca Giordano were his most distinguished followers, who may have been his pupils; others were also Giovanni Do, Enrico Fiammingo, Michelangelo Fracanzani, and Aniello Falcone.

Among Ribera's principal works are St. Januarius Emerging from the Furnace in the Cathedral of Naples; the Descent from the Cross in the Certosa, Naples, the Adoration of the Shepherds (a late work, 1650), now in the Louvre; the Martyrdom of St Bartholomew in the Prado; and the Pieta in the sacristy of San Martino, Naples. His mythologic subjects are often as violent as his martyrdoms, for example, Apollo and Marsyas, with versions in Brussels and Naples, or the Tityus in the Prado . The Prado and Louvre contain many of his paintings; the National Gallery, London, has three.

In his early Roman allegories of the five senses, his series of philosophers depicted as beggars or vagabonds (Archimedes, Prado, 1630) and his series on martyrs he created his own treatise on religious philosophy.

He executed several fine male portraits and a self-portrait. He was also an important etcher, the most significant Spanish printmaker before Goya, producing about forty prints, nearly all in the 1620s.

From 1644, Ribera apparently became seriously ill, which greatly reduced his ability to work, although his workshop continued to produce. In 1647-1648, during the Masaniello rising against Spanish rule, he felt forced to take refuge with his family in the palace of the Viceroy for some months. In 1651 he sold the large house he had owned for many years, and when he died in July 1652 he was in serious financial difficulties.

Although Ribera never returned to Spain, many of his paintings were taken back by returning members of the Spanish governing class, like the Duke of Osuna, and his etchings were brought to Spain by dealers. His influence can be seen in Diego Velázquez, Bartolomé Esteban Perez Murillo, and most other Spanish painters of the period.

In 1990 his 1634 painting, The Martyrdom of Saint Bartholomew, was purchased by the National Gallery in Washington, D.C. by the gallery's 50th Anniversary Committee. It sold at Sotheby's in London for 2.75 million pounds ($4.9 million).[3]

Ribera's The Immaculate Conception traveled to Italy in 2005 to be included in the Vatican's exhibition, A Woman Dressed in Sun: Iconography of the Immaculate Conception. The exhibition was organized by the Roman Catholic Church's Pontifical Commission for Cultural Heritage in conjunction with the 150th anniversary of Pope Pius IX's 1854 proclamation of the Immaculate Conception—the dogma which states that Mary, the mother of Jesus, was free from original sin at the moment of her conception. Ribera's 9-by-6 foot painting depicts the Virgin Mary floating atop cumulous clouds and a host of cherubs and was one of 105 artworks included in the special Vatican exhibition. It was on loan from the Columbia Museum of Art in Columbia, South Carolina.[5]

Retrieved from https://www.newworldencyclopedia.org/p/index.php?title=Jusepe_de_Ribera&oldid=1080859
Categories:
Hidden category:
This page was last edited on 4 October 2022, at 21:19.
Content is available under Creative Commons Attribution/Share-Alike License; additional terms may apply. See Terms of Use for details.