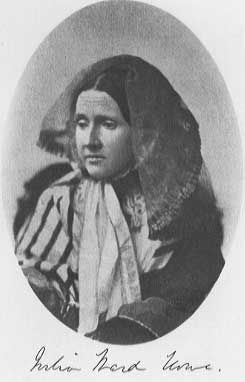 An American abolitionist, she was most famous as the author of The Battle Hymn of the Republic, which she wrote in 1862. After the American Civil War her work for the freedom of slaves evolved into work to gain civil rights for women, and and she played a significant role in the early organizing of women as peace activists.

In 1868, she helped establish the New England Suffrage Association. During a speaking tour in the late 1870's, J.W. Howe called for a peace movement and convened a Woman's Peace Conference in London, as a response to the Franco-Prussian War.

Howe was a woman of great religious conviction whose belief in "deed, and not creed" was the motivating factor behind all of her great achievements. She spoke on "What is Religion" as a featured speaker at the Parliament of World's Religions held in 1893, at the Chicago World's Fair.

Born Julia Ward in New York City, she was the fourth of seven children born to Samuel Ward (1786-1839) and Julia Rush Cutler. Her father was a well-to-do banker who played a role in the founding of New York University. Her mother died when she was six years old.

At the age of 21 years old, Julia Ward married physician Dr. Samuel Gridley Howe, who was 39 years old at the time. Dr. Howe had gained notoriety through his published narrative of experiences in the Greek War of Independence. When they married, he was the director of the Perkins Institute for the Blind in Boston. He was a radical Unitarian who was a part of the Transcendentalist movement. His religious convictions led him to take an active leadership role in the anti-slavery cause.

The couple made their home in South Boston and had six children, five of whom lived to adulthood and became successful professionals. Their marriage was at times quite difficult for Julia, as her husband believed married women should not have a life outside the home. She remained faithful to him throughout their marriage despite his convictions, his mismanagement of her father's inheritance, and his known infidelities.

In the early years of their marriage, she accepted these narrow views on women's roles and used her time at home to write poetry, study philosophy, and learn several languages.

She was always an active supporter of his abolitionist views and they worked together during the Civil War in supporting the United States Sanitary Commission. The Commission played a key role in reforming the unsanitary conditions that played a significant role in the deaths of many wounded soldiers early in the war. Their work on this commission led to recognition by President Lincoln. In 1862, he invited Dr. Sam Howe and his wife to visit him at the White House in Washington, D.C.

Battle Hymn of the Republic

It was during their visit to Washington that Julia Ward Howe was approached by a minister who had read some of her published poems. He asked her if she could write a new song for the war. Pastor James Freeman Clarke asked her to write a song that would replace the song written in admiration of John Brown and his rebellion, John Brown's Body.

She later wrote of her experience of writing the Battle Hymn of the Republic as being one of almost divine revelation. She wrote:

I awoke the next morning in the gray of the early dawn, and to my astonishment, found that the wished-for-lines were arranging themselves in my brain. I lay quite still until the last verse had completed itself in my thoughts, then hastily arose, saying to myself, I shall lose this if I don't write it down immediately.

She concluded her account by writing, "I lay down again and fell asleep, but not before feeling as if something very important had just happened to me."

Her poem was first published in the Atlantic Monthly in February 1862, and quickly became one of the most popular songs for the Union during the American Civil War. The poem was sung to the same tune as that of John Brown's Body which, ironically, was originally written by a southerner for religious rivals.

Julia Ward Howe was born into a strict Episcopalian-Calvinist family. When her father died, she was 20 years old and came to be influenced by a liberal uncle who was made her guardian. She then married Howe who was a radical Unitarian.

She and her husband attended the church of Theodore Parker, a radical thinker on the issues of women's rights and slavery. Parker has been called a Transcendentalist, theologian, scholar, abolitionist, and social reformer. There is evidence that he was one of the so-called Secret Six who bankrolled John Brown's failed efforts and there is speculation that Samuel G. Howe was also one of the six, although there is no proof.

Julia Ward Howe's own religious conviction became very evident in the Old and New Testament Biblical images used in her poem the Battle Hymn of the Republic. She preached often in Unitarian and Universalist churches while mainly attending the Church of the Disciples, which was led by James Freeman Clarke.

Her notoriety for writing the Battle Hymn of the Republic led to her becoming a public figure. From the 1870s, she began to lecture widely throughout Massachusetts and New England.

In 1873, she hosted an annual gathering of women ministers and also helped to found the Free Religious Association.

She was invited to speak at the Parliament of the World's Religions held in 1893, at the Chicago World's Fair. It was the first organized effort to bring the world's religions together for dialog. In her speech What is Religion, she concluded,

From this Parliament let some valorous, new, strong, and courageous influence go forth, and let us have here an agreement of all faiths for one good end, for one good thing—really for the Glory of God, really for the sake of humanity from all that is low and animal and unworthy and undivine.

After the war, Howe continued her social outreach by working with the widows and orphans of soldiers on both sides of the conflict. Witnessing the tolls of war on families on all sides, she turned her attention in 1870, to organizing women to play a role in opposing war in all its forms. She worked hard to push Congress to create a general congress of women "without limit of nationality," who would play a role in bringing about peaceful resolutions to conflicts.

Inspired by Anna Jarvis' efforts with the Mothers Day Work Clubs that she established prior to the Civil War, Howe fought for a formal recognition of a Mother's Day for Peace. She was the first to proclaim Mother's Day in 1870, with her Mother's Day Proclamation.[1] Howe never saw the official establishment of Mother's Day, but would certainly have rejoiced in the fact that the daughter of Anna Jarvis (also named Anna)was responsible for getting it established in 1907.

Howe had already started to shift her focus to women's rights issues in 1868, when she helped found the New England Suffrage Association. She also worked with Lucy Stone and the American Women Suffrage Association (AWSA). In 1870, she also helped Stone and her husband, Henry Blackwell, found Woman's Journal. As an editor and writer for the journal for 20 years, she helped gather essays by writers of the time who disputed the theories that women were inferior to men.

In 1883, Howe published a biography of Margaret Fuller.

In 1889, she helped bring about the merger of the AWSA with the National American Woman Suffrage Association (NAWSA) that at that time was led by Elizabeth Cady Stanton and Susan B. Anthony.

In 1890, she helped found the General Federation of Women's Clubs, which eventually displaced the AAW.

In January 1876, Samuel Gridley Howe died. Apparently, he confessed to Julia on his deathbed about his licentious affairs. Despite the reportage of legend, Julia Ward Howe did not respond, "If you weren't dyin' I'd kill you." She completely forgave him. After his death, she spent two years traveling and lecturing through Europe and the Middle East. It was on her return from her travels that she launched wholeheartedly into her efforts to champion women's rights.

On January 28, 1908, Julia Ward Howe became the first woman elected to the American Academy of Arts and Letters.

Julia Ward Howe died in 1910, and is buried in the Mount Auburn Cemetery in Cambridge, Massachusetts. Samuel G. Elliot, head of the American Unitarian Association, gave her eulogy in front of the 4,000 who attended.

Julia Ward Howe was inducted into the Songwriters' Hall of Fame in 1970.

I never made a poem, dear friend.
I never sat me down, and said,
This cunning brain and patient hand
Shall fashion something to be read.

Men often came to me, and prayed
I should indite a fitting verse
For fast, or festival, or in
Some stately pageant to rehearse.
(As if, than Balaam more endowed,
I of myself could bless or curse.)

Reluctantly I bade them go,
Ungladdened by my poet-mite;
My heart is not so churlish but
Its loves to minister delight.

But not a word I breathe is mine
To sing, in praise of man or God;
My Master calls, at noon or night,
I know his whisper and his nod.

Yet all my thoughts to rhythms run,
To rhyme, my wisdom and my wit?
True, I consume my life in verse,
But wouldst thou know how that is writ?

T'is thus through weary length of days,
I bear a thought within my breast
That greaten from my growth of soul,
And waits, and will not be expressed.

It greatens, till its hour has come,
Not without pain, it sees the light;
"Twixt smiles and tears I view it o'er,
And dare not deem it perfect, quite.

These children of my soul I keep
Where scarce a mortal man may see,
Yet not unconsecrate, dear friend,
Baptismal rites they claim of thee.

"Every life has its actual blanks, which the ideal must fill up, or which else remain bare & profitless forever."

"I am confirmed in my division of human energies. Ambitious people climb, but faithful people build."

"When I see the elaborate study and ingenuity displayed by women in pursuit of trifles, I feel no doubt of their capacity for the most herculean undertakings."

"The strokes of the pen need deliberation as much as the sword needs swiftness."