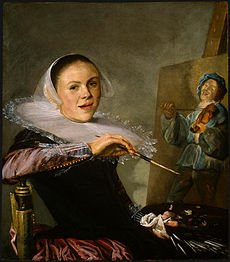 Judith Jans Leyster (also Leijster) (July 28 1609 – February 10, 1660) was a seventeenth century Dutch artist who painted in various fields, including genre subjects, portraits, and the still lifes common in the Dutch Baroque period. She is best known for her happy scenes of couples, families, and Dutch social life, with her subjects singing, dancing, and enjoying themselves.

Leyster's style reflected the Utrecht School, or "Caravaggists," who utilized the dramatic lighting affects inherited from Caravaggio. Well respected by her contemporaries, she exhibited a greater range than most Dutch painters of the era, and she was one of the first to develop the domestic genre scene as her subject matter.

Her works were mostly forgotten or falsely attributed to other artists until 1893, when the Louvre bought what it thought was a Frans Hals painting. It was soon discovered that the work had her monogram hidden under a false signature reading "Frans Hals." Many other works by her were also soon rediscovered. Contemporary study of the seventeenth century iconography and culture of Dutch painting has since allowed Judith Leyster to claim her rightful place in art history. 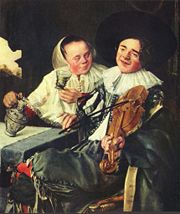 Leyster was born in Haarlem as the eighth child of Jan Willemsz Leyster, a local clothmaker and brewer. While the details of her training are uncertain, in her teens she was well enough known to be mentioned in a book by poet Samuel Ampzing titled Description and Praise of the City Haarlem in Poetry, originally written in 1621. A child prodigy, her father's bankruptcy nearly derailed her career, but she managed to continue her painting while her father created a new business as a brewer.

Leyster and her family moved to Utrecht in 1628 where she came in contact with other painters such as Hendrick Terbrugghen and Gerrit van Honthorst. Her family returned to Haarlem in 1629. 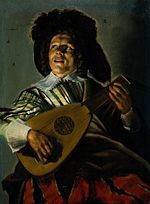 By 1633, she was a member of the Haarlem Guild of St. Luke, the European painters' guild. She was one of only two women at the time who gained entrance into the group, the other being a house painter. Within two years of her entry into the guild, she had taken on three male apprentices. Leyster even sued Frans Hals for stealing one of her students who had left her workshop for that of Hals'. Guild records show that the student's mother paid Leyster four guilders in punitive damages, half of what Leyster had demanded. Instead of returning her apprentice, Hals settled the matter by paying a three guilder fine. However, Leyster was also fined for not having registered the apprentice with the guild.

In 1636, she married Jan Miense Molenaer, himself a more prolific though less talented artist who dealt with similar subjects. In hopes of better economic prospects, they moved to Amsterdam, where the art market was far more stable. They remained there for 11 years and had five children, only two of which survived to adulthood.

They eventually moved to Heemstede near Amsterdam, where they shared a studio in a small house located on the grounds of the present-day Groenendaal park, her husband doing most of the painting as Judith apparently devoted herself more to taking care of family matters. As a result of their sharing this studio, some of the same models and props show up in both of their works. Leyster died at age 50, in 1660. 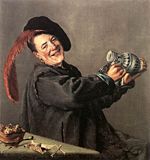 The nature of Leyster's professional relationship with Hals is a matter of considerable debate. She may have been his student or else a friendly colleague, despite the above-mentioned lawsuit. A "Judith Jans" is recorded as being present as a witness at the baptism of Hals' daughter Maria in the early 1630s. However, there were other Judith Janses in Haarlem, so it is not certain that this was Judith Jan (Leyster).

There is no documented evidence of Judith Leyster's supposed apprenticeship under Frans Hals. However, much of Leyster's work is thought by at least some critics to have been heavily influenced by him. One example is her Merry Drinker from 1629 (now in the Rijksmuseum in Amsterdam), which some claim strongly resembles Hals' The Jolly Drinker of 1627-28.

Some art historians have asserted that Hals must have been Leyster's teacher due to the close similarity between their work. However, in Judith Leyster: A Dutch Master and Her World, an international team of art, economic, and social historians concluded that her work is actually closer to that of her husband. They also see the influence Jan Miense Molenaer and Frans Hals' younger brother Drick, more than the older Hals. An account from the poet Samuel Ampzing, reports that she spent time with portrait painter Frans Pietersz de Grebber, implying she learned some of his style. 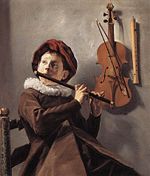 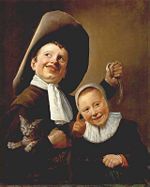 Boy and Girl with a cat and an eel

Leyster was particularly innovative in her domestic genre scenes, early on she was influenced by the Utrecht "Caravaggisti" (followers of Caravaggio). In her paintings, she sometimes created quiet scenes of women at home doing domestic work which were not a popular theme in Holland until the 1650s. Much of her other work was similar in nature to that of many of her contemporaries, featuring taverns and other scenes of entertainment which catered to the tastes and interests of a growing segment of the Dutch middle class that was eager to purchase art as part of their new social status. 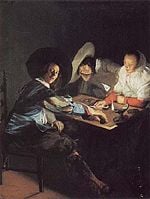 Like the Utrecht Caravaggisti, she introduced light sources into her paintings using the tenebrist style, using extreme contrasts of light and dark in figurative compositions to heighten their dramatic effect, such as in the lamp-lit The Proposition (1631). The tenebrist style of Leyster was more dramatic than the original chiaroscuro used by Da Vinci and earlier painters and had been made more harsh by Caravaggio and his followers, such as the Utrecht Caravaggisti painters Dirck van Baburen, Gerrit van Honthorst and Hendrick Terbrugghen, who had been in Rome in the decade 1610–1620.

Leyster isolated images in the bright light to add more emotional tension. Her work exhibits dashing brushwork and a lively spirit, resulting in very self-confident portraits, still lifes, and allegories about Dutch life. Her distinctive personal style matured in the small, intimate candle-lit scenes for which she is now famous. Her distinctive signature is a monogram containing a star motif with her initials entwined, a play on her surname, "Ley ster" (lode star).

Most of Leyster's dated works are from the years 1629-1635, prior to her marriage. After marrying and having children, she painted little, apparently focusing on supporting her husband's work and raising her family. There are only three known pieces by her painted after 1635: Two illustrations in a book about tulips from 1643 and a portrait from 1652. 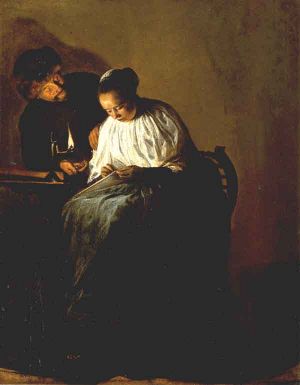 Judith Leyster was one of very few female artists of her time who could distinguish herself alongside the majority male artists. She showed talent from early in her life and was the only woman artist in the Haarlem's Guild of St. Luke. She was well respected by her fellow painters and had a number of apprentices which indicated her skill in painting.

Although well known during her lifetime and esteemed by her contemporaries, Leyster and her work were largely forgotten after her death. Her rediscovery came in 1893, when the Louvre had purchased a Frans Hals painting only to find it had been in fact painted by Leyster. Closer examination revealed that a dealer had changed the monogram that Leyster used as a signature in order to sell it as a work of Hals.

It later emerged that many of Leyster’s works had been falsely attributed to her male contemporaries. Even after this, art historians often dismissed her as an imitator or follower of Hals. This attitude has changed in the last few years with more study of the iconography and culture of Dutch Baroque painting, and contemporary scholarship recognizes her unique gift and contribution to seventeenth century Dutch painting. Among her best-known paintings are The Proposition, Carousing Couple (1630; also called The Happy Couple), and Boy Playing the Flute (c. 1635).

Retrieved from https://www.newworldencyclopedia.org/p/index.php?title=Judith_Leyster&oldid=1080827
Categories:
Hidden category:
This page was last edited on 4 October 2022, at 21:00.
Content is available under Creative Commons Attribution/Share-Alike License; additional terms may apply. See Terms of Use for details.