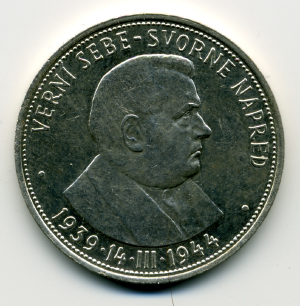 Slovak coin from 1944 bearing the image of Jozef Tiso.

Jozef Tiso (October 13, 1887 – April 18, 1947) was a Roman Catholic priest and a famous Nazi collaborator as president of Slovakia during World War II. After serving as a Catholic educator, he rose to leadership in the nationalist Slovak People's Party and became a deputy of the Czechoslovak parliament. He went on to serve as a member of the Czechoslovak government and finally became prime minister. After briefly losing power in 1939, he obtained the support of Adolf Hitler and became the president of the Independent Slovak Republic from 1939-1945, allied with Nazi Germany.

Tiso's role in the treatment of Slovak Jews during the war has been a source of constant controversy. It is undisputed that he personally held anti-semitic views and that his government enacted harsh anti-Jewish legislation similar to that passed earlier in Nazi Germany. His administration also cooperated with the Nazi plan to deport tens of thousands of Jews to concentration camps. However, his defenders point out that Tiso's government halted the deportation of Jews to Auschwitz when it became clear that Jews were being executed in large numbers there. Others claim that Tiso played a major part in the extermination process and was Hitler's willing tool.

When the country was freed from Nazi occupation at the end of World War II, Tiso was found guilty of treason and collaboration with the Nazis by pro-Soviet Czechoslovak authorities. Tiso was hanged on April 18, 1947. 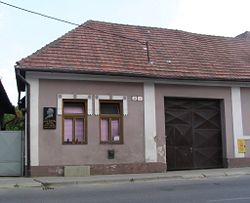 Born in Veľká Bytča (today's Bytča) on October 13, 1887, Jozef Tiso graduated from the Pasmaneum college in Vienna, in 1910, as a theologian. He worked as a Catholic curate in several towns, teaching Slovak spelling, organizing theater performances, and doing cultural work.

At the beginning of World War I, Tiso served as a military chaplain. In 1915, he became the director of the local minor seminary at Nitra and a teacher at the Piarist high school in the same town. From 1921 to 1924, Tiso served as the secretary of the local bishop and a teacher at the seminary of divinity at Nitra. In 1924, he became the seminary's dean and parish priest of the town of Bánovce nad Bebravou.

Tiso's political rise was based on his activities as a leader of the Slovak People's Party. Father Andrej Hlinka had founded the party as a nationalist Roman Catholic group in 1913, while Austria-Hungary still ruled Slovakia. After WWI, the party sought to win the autonomy of Slovakia within Czechoslovakia. By the mid 1920s, it had become the largest party in Slovakia, one of the two purely Slovak parties in Slovakia. When Hlinka died in 1938, Tiso became de facto leader of the party. Officially, however, he served as its deputy leader from 1930 to October 1, 1939, becoming the official party leader only after he had become the president of Slovakia.

After Adolf Hitler's Germany annexed the Sudetenland (the German part of Czechoslovakia), Czechoslovak's socialist president Edvard Beneš fled the country, in October 1938. During the chaos which resulted, the Slovaks declared their autonomy within Czechoslovakia. Tiso, as the leader of the right-wing Slovak People's Party, became the prime minister of this autonomous Slovakia. Hungary, however, had never accepted the separation of Slovakia from its control in 1918, after WWI. It took advantage of the situation and managed to persuade Germany and Italy, by means of the so-called Vienna Award (Vienna Arbitration), to pressure Slovakia to accept the occupation of one third of Slovak territory by Hungarian troops in November 1938.

Slovakia in 1941
Did you know?
Jozef Tiso is regarded by some as a hero who protected Slovakia during World War II and by others as a traitor who collaborated with the Nazis

In reaction to this, all Czech and Slovak political parties in Slovakia, except for the Communists, joined forces and set up the nationalist "Hlinka's Slovak People's Party—Party of Slovak National Unity." In January 1939, the Slovak government demonstrated its fascist tendency by officially prohibiting all parties except three: The Party of Slovak National Unity, the "Deutsche Partei" (consisting of Germans in Slovakia), and the "Unified Hungarian Party" (a party of Hungarians in Slovakia).

From February 1939, representatives of Germany, planning to occupy the Czech part of the country and not strongly interested in Slovakia at this time, began to persuade Slovak politicians to declare independence. On March 9, 1939, however, Czech troops occupied Slovakia, and Tiso lost his post of prime minister to Karol Sidor. This situation, however, was unacceptable to Germany.

On March 13, 1939, Hitler summoned Tiso to Berlin and personally persuaded him to declare the immediate independence of Slovakia under German "protection." Otherwise, Hitler warned, Hungary and Poland would certainly annex the remaining territory of Slovakia.

Tiso then reportedly spoke by phone to the Czechoslovak president Emil Hácha and to the new Slovak prime minister, Sidor. They agreed to convene the Slovak parliament the next day and let it decide what course to take. On March 14, the parliament unanimously declared the "independence" of Slovakia, and on March 15, Germany invaded the remaining Czech lands.

Tiso served as the prime minister of independent Slovakia from March 14, 1939 until October 26, 1939. On October 26, he became the country's president. Only on October 1, 1939, did he officially become the president of the Slovak People's Party. From 1942 on, Tiso styled himself Vodca ("Leader"), an imitation of the German Führer. 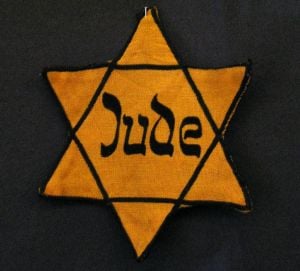 The independence of Slovakia, however, remained largely illusory as the "republic" had become a German puppet state. The Slovak People's Party functioned as virtually the sole legal political organization in Slovakia. Under Tiso's leadership, the party adopted the Nazi policy on anti-Semitic legislation, not without a good deal of popular support based on Hlinka's slogan of "Slovakia for the Slovaks," a line vehemently followed by Tiso.

The main act of this policy was the so-called Jewish Code. Under this law, Jews in Slovakia could not own any real estate or luxury goods. They were excluded from government-funded jobs and could not participate in public sports or cultural events. Jews were also excluded from secondary schools and universities, and were required to wear the star of David in public. Tiso's letters suggest that he himself—like many people in Central Europe at that time—had definite anti-Semitic views.

However, opinions differ widely on his role in the Jewish deportations from Slovakia. It is clear that he adhered to the Nazi line to a great extent, but some sources indicate that the first deportations took place behind his back due to his personal opposition. On the other hand, documents concerning the holocaust in Slovakia (such as research by leading Slovak historians Eduard Niznansky, Ivan Kamenec, Katarina Hradska, and Igor Baka at the Milan Simecka Foundation in cooperation with the Jewish Community in Slovakia and The Holocaust Documentation Centre) show that the Slovak government voluntarily cooperated with Germany and coordinated deportations. Hitler himself reportedly praised the Slovak policy concerning the Jews in a meeting with Tiso in the Klassheim Castle in Salzburg (Ostmark), on April 22, 1942. 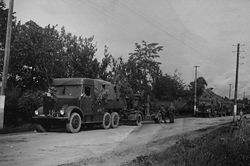 Convoy of Slovak military vehicles in the summer of 1944.

Although deportations of Jews from Slovakia started in March 1942, they were stopped despite German opposition in October of that same year. Reportedly, the deportations were discontinued after it became clear that Germany not only used the Slovakian Jews as forced laborers, but had also begun systematically executing them in camps. Public protests arose, as well as pressure from the Holy See, and Slovakia thus became the first state in the Nazi sphere to stop deportations of Jews. However, some 58,000 Jews (75 percent of Slovak Jewry) had already suffered deportation, mostly to Auschwitz where only a minority survived.

Between October 1942 and October 1944, independent Slovakia sometimes served as a haven of last resort for Jews suffering even worse persecution in Nazi-occupied neighboring countries such as annexed Austria, the Protectorate of Bohemia and Moravia, Poland, and occupied Ukraine.

On August 29, 1944, the Slovak National Uprising was launched in an attempt to oust Tiso and his collaborationist government. Edvard Beneš, leader of the Czechoslovak government in exile in London, had initiated the preparations for the revolt in 1943. The insurrection became a serious threat to Tiso's regime as deserting elements of the Slovak Army joined the cause and the Soviet Army and Air Force moved to support the rebel troops. Germany responded by moving in force to put down the rebellion.

Jewish deportations were resumed by German occupation authorities in October 1944, when the Soviet army reached the Slovak border. Nazi Germany occupied all of Slovakia and the country lost any semblance of independence. During the 1944-1945 German occupation, the country saw 13,500 more Jews deported and another 5,000 imprisoned. During this, time Tiso retained the post of president of Slovakia.

Tiso finally lost power when the Soviet Army conquered the last parts of western Slovakia in April 1945. He faced a charge of treason and collaboration with Nazism. On April 15, 1947, the National Court sentenced him to death. Slovak public opinion opposed the execution and both the Slovak Democratic Party and the Czechoslovak cabinet registered their opposition. However, only president Edvard Beneš had the power to grant a reprieve, and he refused to grant Tiso amnesty. Tiso was hanged on April 18, 1947.

Of all individuals in Slovak history, none is more divisive than Monsignor Jozef Tiso. Debate as to what role Tiso played in the transport of Jews to the Nazi concentration camps during this horrific period continued into the twenty-first century.

History remembers Tiso both as a puppet of the Nazis and as a leader who, for a time, spared Slovakia from the cruel Nazi occupation that befell much of the rest of Europe during the war. His "deal with the devil," however, proved not only his undoing, but placed his nation on the side of evil during the twentieth century's most violent conflict.

Retrieved from https://www.newworldencyclopedia.org/p/index.php?title=Jozef_Tiso&oldid=1078379
Categories:
Hidden category:
This page was last edited on 8 September 2022, at 02:02.
Content is available under Creative Commons Attribution/Share-Alike License; additional terms may apply. See Terms of Use for details.