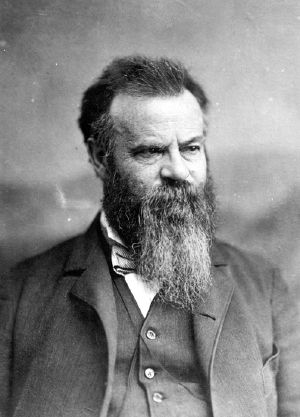 John Wesley Powell, an American soldier, geologist and the second director of United States Geological Survey from 1881 to 1894

John Wesley Powell (March 24, 1834 - September 23, 1902) was an American soldier, geologist, and explorer of the American West. He earned fame through his Powell Geographic Expedition, a three-month river trip down the Green and Colorado rivers in 1869, which included the first known passage through the Grand Canyon. Powell published scientific accounts of his expeditions, as well as advancing proposals for land utilization and irrigation projects in the areas he studied. He also published his work on classifying Native American languages. Powell had the adventurous spirit of a pioneer, overcoming difficulties to achieve his goal, and laying a path for others to follow. Although he was unsuccessful in having his proposals adopted, his work remains a valuable way of thinking about land, water, and society as parts of an interconnected whole.

John Wesley Powell was born on March 24, 1834 in Mount Morris, New York, the son of Joseph and Mary Powell. His father, a poor itinerant preacher, had immigrated to the United States from Shrewsbury, England in 1830. His family moved westward to Chillicothe, Ohio to Walworth County, Wisconsin, and then finally settled in rural Boone County, Illinois.

Powell studied at Illinois College, Wheaton College, and Oberlin College, acquiring a knowledge of Ancient Greek and Latin, but never graduated. He also had a deep interest in the natural sciences, and studied botany, zoology, and geology on his own, without having a teacher to guide him.

Powell's explorations, collections, and knowledge of the natural sciences led to his election as secretary of the Illinois Natural History Society in 1859. 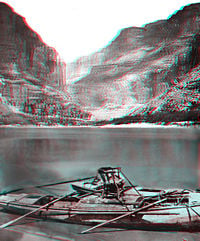 During the Civil War, he enlisted in the Union Army, serving first with the Twentieth Illinois Volunteers. At the Battle of Shiloh, he lost most of one arm when struck by a musket ball. The raw nerve endings in his arm would continue to cause him pain for the rest of this life. Despite the loss of his arm, he returned to the army and was present at the battles of Champion Hill and Big Black River Bridge. Further medical attention to his arm did little to slow him down; he was made a major, and served as chief of artillery with the Seventeenth Army Corps.

In 1862, he married Emma Dean. They had one child, a daughter named Mary.

After leaving the army he took the post of professor of geology at the Illinois Wesleyan University. He also lectured at Illinois Normal University, and helped found the Illinois Museum of Natural History, where he served as the curator, but declined a permanent appointment in favor of exploration of the American West.

In 1881, he became the second director of the U.S. Geological Survey, a post he held until he voluntarily retired in 1894. He was also the director of the Bureau of Ethnology at the Smithsonian Institution until his death.

Powell died from a cerebral hemorrhage at his summer home in Haven, Maine on September 23, 1902. He was buried in Arlington National Cemetery. 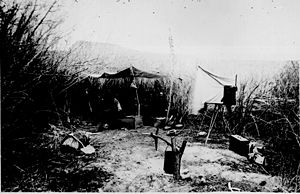 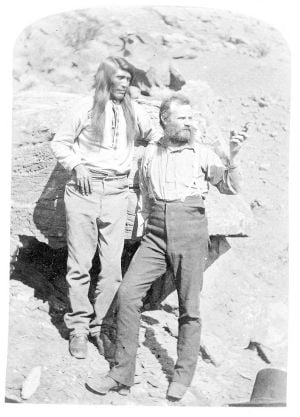 From 1867, Powell led a series of expeditions into the Rocky Mountains and around the Green and Colorado rivers. In 1869, he set out to explore Colorado and the Grand Canyon. He gathered nine men, four boats, and food for ten months and set out from Green River, Wyoming on May 24. Passing through dangerous rapids, the group passed down the Green River to its confluence with the Colorado River (then also known as the Grand River upriver from the junction), near present-day Moab, Utah. The expedition's route traveled through the Utah canyons of the Colorado River, which Powell described in his published diary as having wonderful features—carved walls, royal arches, glens, alcove gulches, mounds, and monuments. From which of these features shall we select a name? We decide to call it Glen Canyon. One man quit after the first month and another three in the third, only days (two to be exact) before the group reached the mouth of the Virgin River on August 30, after traversing almost 1,000 miles (1,500 km). The three who left the group late in the trip were later killed, allegedly by a Shivwitz band of the Northern Paiute seeking three men who had killed an Indian woman (Stegner 1982). However, exactly how and why they died remains a mystery debated by Powell biographers.

Did you know?
John Wesley Powell led the first scientific expedition down the Colorado River through the Grand Canyon

After completing these expeditions, Powell directed a federal geologic and geographic survey of western public lands, and proposed land utilization and irrigation projects. In his 1878 Report on the Lands of the Arid Region, and related magazine articles now published in Seeing Things Whole, Powell recommended organizing the arid lands to be governed by resident citizens whose interlocking interests would create the checks and balances that would provide a foundation for good stewardship. This "bioregional" vision remains an as yet untried model for governance that offers a potential solution to the resource management conflicts of the region.

As an ethnologist and early anthropologist, Powell subscribed to a particularly rigid form of cultural evolutionary theory. In his writings, he divided all societies into "savages," "barbarians," and "civilizations." For the savages, Powell clearly had in mind the Native Americans he encountered in his travels; for the barbarians he probably was thinking of the Huns and other European chiefdoms that had conquered Rome in antiquity. By civilization, Powell clearly had his own society in mind. In his view, all societies naturally progressed toward civilization; those who had not achieved industrialization had not fulfilled their potential. Powell is credited with coining the word acculturation, first using it in an 1880 report by the U.S. Bureau of American Ethnography. In 1883, Powell defined "acculturation" as the psychological changes induced by cross-cultural imitation.

John Wesley Powell is remembered for his expeditions to explore and map the Colorado River and its canyons. Thorough his explorations, Powell confirmed his theory that the Colorado River existed prior to the Grand Canyon, and then cut out the canyons as the Colorado Plateau rose.

He was not only a pioneering explorer but also a great thinker, whose work reminds us that land and the people who live on it are forever related. His legacy informs people everywhere who strive to reconcile the demands of society with the imperatives of the land.