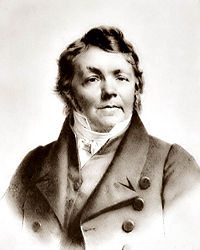 Johann Nepomuk Hummel or Jan Nepomuk Hummel (November 14, 1778 – October 17, 1837) was a composer and virtuoso pianist of Austrian origin from Pressburg in present-day Bratislava, Slovakia. His music reflects the transition from the Classical to the Romantic musical era. Although Hummel died famous, with an enduring posthumous reputation, his music was quickly forgotten at the onset of the Romantic period, due in part to classical being seen as out of fashion. During the classical revival of the early twentieth century, Hummel was passed over. Like Joseph Haydn (for whom a revival had to wait until the second half of the twentieth century), Hummel was overshadowed by Wolfgang Amadeus Mozart but the quality and sensitivity of his work was not overshadowed.

As the bridge between the classical and romantic eras, Hummel showed a preference for the expressive melodic lines of the Classical style with wider ranges of pitch, dynamics and tone color. To Johann Hummel, the expressiveness of his piano music showed the attributes of a character who initiated his own personal and spiritual transformation through his music and hoped that others would take a principled human effort to undergo such a similar transformation.

Hummel was born in Pressburg (now Bratislava), Slovakia. His father, Josef Hummel, was the director of the Imperial School of Military Music and the conductor of Schikaneder's Theater Orchestra. In Vienna Wolfgang Amadeus Mozart offered the boy music lessons at the age of eight after being impressed with his ability. Hummel was taught and housed by Mozart for two years free of charge and made his first concert appearance at the age of nine, at one of Mozart's concerts.

Hummel's father then led him on a European tour, arriving in London, where he received instruction from Muzio Clementi and stayed for four years before returning to Vienna. In 1791, Joseph Haydn, who was in London at the same time as young Hummel, composed a sonata in A flat for Hummel, who played its premiere in the Hanover Square Rooms in Haydn's presence. When Hummel finished, Haydn reportedly thanked the young man and gave him a guinea.

The outbreak of the French Revolution and the following Reign of Terror caused Hummel to cancel a planned tour through Spain and France. Instead he concertized his way back to Vienna. Upon Hummel's return to Vienna he was taught by Johann Georg Albrechtsberger, Joseph Haydn, and Antonio Salieri.

At about this time, young Ludwig van Beethoven arrived in Vienna and took lessons from Haydn and Albrechtsberger, becoming a fellow student and a friend. Beethoven's arrival was said to have nearly destroyed Hummel's self-confidence, though he recovered without much harm. Despite the fact that Hummel's friendship with Beethoven was often marked by ups and downs, the mutual friendship developed into reconciliation and respect. Before Beethoven's death, Hummel visited him in Vienna on several occasions, with his wife Elisabeth and pupil Ferdinand Hiller. Following Beethoven's wishes, Hummel improvised at the great man's memorial concert. It was at this event that Hummel became good friends with Franz Schubert. Schubert dedicated his last three piano sonatas to Hummel. However, since both composers were dead by the time of the sonatas' first publication, the publishers changed the dedication to Robert Schumann, who was still active at the time.

In 1804, Hummel succeeded Haydn as Kapellmeister to Prince Esterházy's establishment at Eisenstadt. He held this post for seven years before being dismissed for neglecting his duties. Following this, he toured Russia and Europe and married the opera singer Elisabeth Röckel. They had two sons.

Hummel later held the position of Kapellmeister at Stuttgart and Weimar, where he formed a close friendship with Goethe and Schiller, colleagues from the Weimar theater. During Hummel's stay in Weimar, he made the city into a European musical capital, inviting the best musicians of the day to visit and make music there. He started one of the first pension programs for fellow musicians, giving benefit concert tours when the musicians' retirement fund ran low. In addition, Hummel was one of the first to fight for musical copyrights against intellectual pirating. 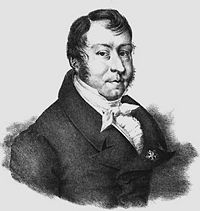 Hummel's influence can also be seen in the early works of Frederic Chopin and Robert Schumann, and the shadow of Hummel's Piano Concerto in B minor as well as his Piano Concerto in A minor can be particularly perceived in Chopin's concertos. This is unsurprising, considering that Chopin must have heard Hummel on one of Hummel's concert tours to Poland and Russia, and that Chopin kept Hummel's piano concertos in his active repertoire.

Robert Schumann also practiced Hummel (especially the Sonata in F sharp minor, op. 81). He later applied to be a pupil to Hummel, but was rejected for his neurotic instability. Liszt would have liked to study with Hummel, but Liszt's father Adam refused to pay the high tuition fee Hummel was used to charging (thus Liszt ended up studying with Czerny). Czerny, Friedrich Silcher, Ferdinand Hiller, Sigismond Thalberg, Felix Mendelssohn and Adolf von Henselt were among Hummel's most prominent students.

Hummel's music took a different direction to that of Beethoven's. Looking forward, Hummel stepped into modernity through pieces like his Sonata in F sharp minor, opus 81, and his Fantasy, opus 18, for piano. These pieces are examples where Hummel may be seen to both challenge the classical harmonic structures and stretch the sonata form. In these two pieces, Hummel showed himself to be innovative and daring, especially considering that Op. 81 was composed five years before Beethoven's Hammerklavier sonata. However, Hummel's vision of music was not iconoclastic. The philosophy on which Hummel based his actions was to "enjoy the world by giving joy to the world."

His main oeuvre is for the piano, on which instrument he was one of the great virtuosi of his day. He wrote eight piano concertos, ten piano sonatas (of which four are without opus numbers, and one is still unpublished), eight piano trios, a piano quartet, a piano quintet, a wind octet, a cello sonata, two piano septets, a mandolin concert, a mandolin sonata, a Trumpet Concerto in E major (usually heard in the more convenient E flat major), four hand piano music, 22 operas and Singspiels, masses, and much more. The conspicuous lack of the symphony among Hummel's works may be explained by the fact that he was puzzled by Beethoven's innovations in that field. 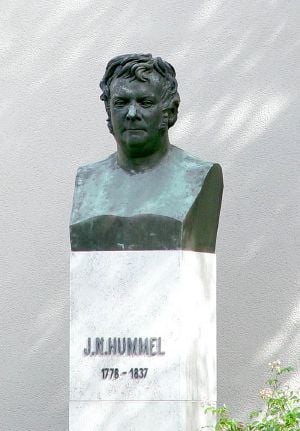 Bust of Hummel near the Deutsches Nationaltheater in Weimar.

At the end of his life, Hummel saw the rise of a new school of young composers and virtuosi, and found his own music slowly going out of fashion. His disciplined and clean Clementi-style technique, and his balanced classicism, opposed him to the rising school of tempestuous bravura displayed by the likes of Liszt and Giacomo Meyerbeer. Composing less and less, but still highly respected and admired, Hummel died peacefully in Weimar in 1837. A freemason (like Mozart), Hummel bequeathed a considerable portion of his famous garden behind his Weimar residence to his masonic lodge.

Although Hummel died famous, with a lasting posthumous reputation apparently secure, his music was quickly forgotten at the onrush of the Romantic period, perhaps because his classical ideas were seen as old-fashioned. Later, during the classical revival of the early twentieth century, Hummel was passed over. Like Haydn (for whom a revival had to wait until the second half of the twentieth century), Hummel was overshadowed by Mozart. Due to a rising number of available recordings, and an increasing number of live concerts across the world, it seems admirers of his music are now growing again in number.

Johann Hummel was an extraordinary pianist and composer who helped facilitate the connection between the Classical and Romantic periods with the advocation of the classical forms with the romantic emotional intensities of his tonal color and dynamics. He led the way in introducing a wider harmonic vocabulary within his piano pieces. Hummel was comfortable with the colorful new unstable chords which he quickly resolved in a classical way. Hummel knew the key musical figures of the time, i.e. Mozart, Haydn, Clementi, Schubert and Beethoven, and though very accomplished at the keyboard, understood that music was to be protected with copyright statutory rights and he was one of the first to fight for the rights of the composers.

Retrieved from https://www.newworldencyclopedia.org/p/index.php?title=Johann_Hummel&oldid=1074916
Categories:
Hidden category:
This page was last edited on 1 August 2022, at 14:45.
Content is available under Creative Commons Attribution/Share-Alike License; additional terms may apply. See Terms of Use for details.