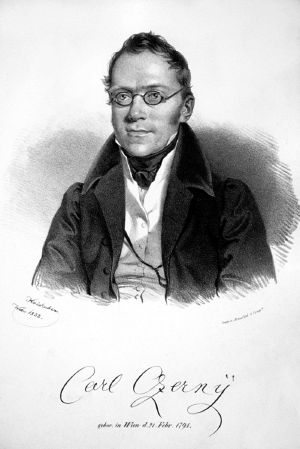 Carl Czerny (sometimes Karl; February 21, 1791 – July 15, 1857) was an Austrian pianist, composer and teacher. He is best remembered today for his books of etudes for the piano. As a precocious pianist, Czerny became the leading performer of Beethoven's pieces at a time when a new form of the piano was being introduced to facilitate a performer's ability to execute special stylistic nuances and techniques which were not possible on an older instrument. Czerny was a great influence on the myriads of piano students who studied with him, such as Franz Liszt.

With an emphasis on principled practice, Czerny inculcated a discipline of detailed study to his students and taught that each student must take responsibility for his personal transformation and sense of duty through music education.

Czerny was born in Vienna to a family of Bohemian origins. He was taught piano by his father before taking lessons from Johann Nepomuk Hummel, Antonio Salieri, and Ludwig van Beethoven. He was a child prodigy, making his first appearance in public in 1800 playing a Mozart piano concerto. Later, he gave the Vienna premiere of Beethoven's Piano Concerto No. 5 "Emperor" in 1812.

He quickly took to teaching, and by the age of 15, he was already a sought after instructor. He eventually instructed Franz Liszt, among many others. Liszt later dedicated his 12 Transcendental Etudes to Czerny, who was one of the first composers to use étude ("study") for a title. Liszt also referenced him in the collaborative work The Hexameron.

Czerny composed a very large number of pieces (up to an op. 861), including a number of Masses and Requiems, and a large number of symphonies, concertos, sonatas and string quartets. None of these pieces are often played today, however, and he is known as a composer almost exclusively because of the large number of didactic piano pieces he wrote, many of which are still used today, such as The School of Velocity and The Art of Finger Dexterity.

Signum Records has recently issued at least three CD recordings of Czerny's symphonies and concerti, including a concerto for piano with four hands in C Major. In fact, the view of Czerny as primarily a composer of didactic works is being challenged, as can be seen in the review cited below of a Sony Classical CD of some of Czerny's four-hand works.