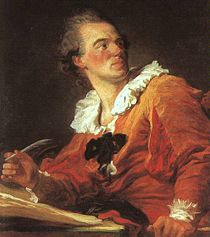 Jean-Honoré Fragonard (April 5, 1732 – August 22, 1806) is known as one of France's most significant painters of the eighteenth century. Fragonard was one of the favorites in the courts of both King Louis XV and King Louis XVI. His Rococo style was characterized by a fluid technique, exuberance, spontaneity, and a delicate hedonism. Painting over 550 works (only 5 of which are dated), not including his various drawings and etchings, Fragonard's canvases were often delicately colored scenes of gardens, nature, and romance.

While the greater part of his active life occurred during the Neoclassical period his efforts to adapt himself to the new Neoclassicism vogue were unsuccessful. Even though he had the support of Jacques-Louis David his reputation was somewhat sullied by the French Revolution's distaste for Rococo. He was the last successful French Rococo artist.

Jean-Honoré Fragonard was born on April 5, 1732, in the French region of Provence, the only child of François Fragonard (1699-1781) and Françoise Petit, who both came from families of shopkeepers and glove-makers in Grasse, Alpes-Maritimes. In 1738, his family moved to Paris. Fragonard was sent away from home as an apprentice to a Parisian lawyer and notary in 1747. During his brief time as an apprentice, Fragonard displayed such a talent and appetite for drawing and art that the lawyer suggested he be apprenticed under an artist.

At the age of 18, Fragonard was taken to the well-known painter, Francois Boucher. Boucher was able to recognize the potential within Fragonard, but he was not willing to teach him the basic principles. Thus, he sent Fragonard away to gain some experience. He began studying the elements of painting under Jean Baptiste Simeon Chardin, where he learned the basics of mixing colors and forming shapes and dimensions. After six intense months learning under the great luminist, Fragonard again returned to Boucher. Finally, Boucher was prevailed upon to accept him as a pupil, and it was under his tutelage that Fragonard's distinct style and methods began to take shape.

Apart from developing his own style, Fragonard became a master at copying other artists' styles. He was able to imitate Boucher's style so completely and flawlessly that eventually Boucher entrusted him with the execution of replicas of his own paintings.

In 1752, Boucher recommended that Fragonard enter as a competitor in the Prix de Rome. The Prix de Rome was a scholarship for art students at the time. The various artists were required to prove their talents by completing a rigorous elimination process. The grand prize winner would receive a stay at the Mancini Palace in Rome, all expenses paid by the King of France. The contest was organized by the Royal Academy of Painting and Sculpture, and was generally open only to their students. Fragonard was not a pupil of the Academy, yet was still allowed to enter (perhaps because of Boucher's endorsement). Winning the prize meant studying under the court painter to Louis XV, Charles-André van Loo, in Paris, as well as attending the Academy in Rome.

Fragonard gained the Prix de Rome with his painting of "Jeroboam Sacrificing to the Golden Calf." After his win, and before proceeding to Rome, he studied for a period of three years under the direction of Van Loo at the École des Élèves Protégés. One year before leaving for Rome, Fragonard painted the famous "Christ Washing the Feet of the Apostles" now housed at Grasse Cathedral in Provence. On September 17, 1756, Fragonard moved to Rome to claim his prize for the competition and moved into the French Academy in Rome, with Charles-Joseph Natoire acting as head of the school.

Fragonard spent six years in Italy. He began his work at the Academy by copying and imitating many famous paintings by various Roman Baroque artists. At the beginning of his studies, he met Hubert Robert, a fellow painter who would become his lifelong friend. Fragonard was also educated in the workings of other painters. Among the group he admired most were the masters of the Dutch and Flemish schools, including Rubens, Hals, Rembrandt, and Ruisdael. One of his greatest influences would prove to be the Venetian master Giovanni Battista Tiepolo. He studied Tiepolo's works in depth while in Venice.

When his scholarship ended in July 1759, he was able to obtain permission to stay on in residence until November. At that time, he met a wealthy, amateur artist, the Abbé de Saint-Non. Saint-Non eventually became one of Fragonard's chief patrons. Early in the year of 1760, Saint-Non took Fragonard and Robert on a prolonged tour of Italy.

During their travels through Italy Fragonard executed hundreds of sketches, drawings, and paintings of the scenic towns and villages. He was particularly drawn to romantic gardens, accented with fountains, grottoes, temples, and terraces. Fragonard became an expert at fluid looking flowers and foliage. His figures had an air and grace about them that no other artist of the time could rival. He loved painting couples on the verge of newfound romance, as well as peasant mothers with their children. It was his traveling that solidified his favored subject matter and original style, however, he would not fully commit to this style for another five years.

In 1761, Fragonard returned to Paris. As he began making his way as an artist, he kept with the religious and historical paintings similar to the one that had won him the Prix de Rome. In 1765, Fragonard made a break from that form of painting and began working in the Rococo style that was all the rage in France at the time. With his painting Coresus et Callirhoe, which he submitted to the Royal Academy in 1765, he filled the art community with high hopes that he would be the next great history painter for France. However, it was a promise he never fulfilled when he turned to working for private collectors.

Fragonard's reputation took flight and he received commissions from various pleasure-loving and wealthy patrons. His ability to combine risque scenes with such delicate and tender colors and his unique brushwork sparked a demand in France. During this time he painted such works as the Serment d'amour (Love Vow), Le Verrou (The Bolt), La Culbute (The Tumble), La Chemise enlevée (The Shirt Withdrawn), and The Swing (Wallace collection). 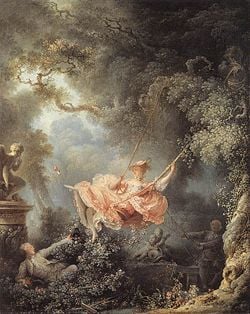 The Swing depicts a lady in a pink dress seated on a swing on which she floats through the air, her skirts billowing, while a hidden gentleman observes from a thicket of bushes; the landscape setting emphasizes a bluish, smoky atmosphere, foaming clouds, and foliage sparkling with flickering light. Pictures like The Swing brought Fragonard harsh criticism from Denis Diderot, a leading philosopher of the Enlightenment. Diderot charged the artist with frivolity and admonished him to have "a little more self-respect."[1]

In 1769, Fragonard married Marie-Anne Gérard, also from the town of Grasse. Shortly after his marriage he received a very honorable and elite commission from Mme du Barry, a courtesan who was the last mistress of Louis XV. In 1770, she hired him to decorate her new Pavillon de Louveciennes. Fragonard completed the commission by painting four large paintings titled the Progress of Love (now housed at the Frick Collection,New York City). A dispute with the patron led to the paintings being returned to the artist and replaced by a more Neoclassical series by Joseph-Marie Vien (1716–1809).[2] Then in 1772 he received a somewhat similar commission from the actress Madeleine Guimard.[3]

In 1773 Fragonard made a second trip to Italy, one which lasted for a year. Again he concentrated on drawing picturesque Italian landscape subjects rather than on painting. The return journey was taken through Vienna, Prague, and Germany. On his return to Paris, his wife's 14-year-old sister, Marguerite, joined the family. As a result he turned his interests toward a new type of subject matter: domestic scenes inspired by Jean-Jacques Rousseau's moral philosophy or romantic novels (The Happy Family) as well as scenes concerned with children's upbringing. His son, Évariste (born 1780), frequently was used as a model in these (The Schoolmistress).[4]

He painted some of his finest landscapes in 1775; the best of these, such as the Fête at Saint-Cloud, have a fantasy quality in which people are dwarfed into insignificance and the compositions are dominated by great fluffy green and golden trees melting into surging clouds. In the last years preceding the French Revolution, Fragonard turned finally to Neoclassical subject matter and developed a less fluent Neoclassical style of painting (The Fountain of Love). But Fragonard's art was too closely associated with the pre-Revolutionary period to make him acceptable during the Revolution, which also deprived him of private patrons. In 1790, he fled to his native Provence, but in 1791 he was back in Paris.

The young Jacques-Louis David took a great deal of interest in Fragonard; his early works were clearly influenced by the compositions and techniques of the Rococo master. During the 1790s, when revolutionary events all but prevented Fragonard from continuing to paint, David helped to secure positions for him as a curator and administrator. While commissions and sales were essentially nonexistent in these turbulent years, Fragonard was not excluded from working within the existing institutions of art. He played an essential role in founding what is now the Louvre. Between 1792 and 1797, he was one of six members of the Commission du Muséum Central, a body that oversaw every aspect of the new museum.

His death in 1806 passed almost unnoticed, and his work remained unfashionable until well after 1850.[5]

His only pupils of note were his sister-in-law Marguerite Gérard and his son Alexandre Evariste Fragonard, who from an early age was noted as a draughtsman and during the Empire worked as a decorative painter and sculptor and also provided designs for the Sèvres porcelain factory. His grandson Théophile Fragonard (1806-1876) also worked as a painter for Sèvres.

For more than half a century, Jean-Honoré Fragonard was completely ignored by many art historians. However, a reevaluation has solidified Fragonard as one of the two great poetic painters of the eighteenth century in France, the other being Jean-Antoine Watteau. The impressionists of the nineteenth century, particularly Pierre-Auguste Renoir, were clearly influenced by his use of color and his technique.

Well represented in the Louvre, the Wallace Collection in London, and the Frick Collection and the Metropolitan Museum in New York City, his work can also be seen in the museums of Washington, D.C., Boston, Cleveland, Detroit, and St. Louis.[6]