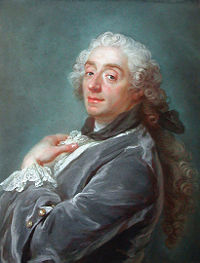 François Boucher by Gustav Lundberg in 1741.

François Boucher (September 29, 1703 – May 30, 1770) had an unparalleled career as a French painter. His versatility in the popular style of Rococo, led to great works that were consistently classical in subject and skill. His playful style and frivolous subject matter exemplify the Rococo style and embody the elegant superficiality of French court life in the mid-eighteenth century. He is especially renowned for his sensuous portrayal of the human body. His prolific output included over 1,000 paintings and 10,000 drawings.

One of the great painters and draftsmen of the eighteenth century, he mastered every branch of decorative and illustrative painting. His subject matter ran the gamut of historical, religious, mythological, portraiture, landscape, still life, and ordinary life events.[1]

Boucher raised the level of the preliminary drawing for the studio painting to a bona fide and finished art in its own right. His chosen instrument for drawing ranged from pencil, to charcoal, to pen and ink, to pastel, to watercolor wash, and to various chalks of different colors.[2] He dominated French painting until the emergence of Neoclassicism, when criticism was heaped on him and his followers. 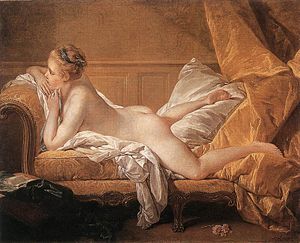 François Boucher was born in Paris to a family of little means. His father, Nicholas Boucher, was a painter specializing in embroidery designs. These humble beginnings did not allow Boucher to receive any formal education as a young man. Instead, he received what knowledge he had from working under his father, helping with the family business.

When Boucher turned 17, he became an apprentice to François Lemoyne as a designer of embroidery patterns for three months. After that time the money ran out and Boucher went to work for Jean-François Cars, an engraver. It was under Cars that Boucher began to distinguish himself as a serious artist. He won the elite Grand Prix de Rome in 1723. The Prix de Rome was a scholarship for art students at the time. The various artists were required to prove their talents by completing a rigorous elimination process. The grand prize winner would receive a stay at the Mancini Palace in Rome, all expenses paid by the King of France. The contest was organized by the Royal Academy of Painting and Sculpture. Although Boucher was announced the winner of the prize, he declined going to Italy in order to work with Jean de Jullienne (1686–1766) making etchings after drawings by Antoine Watteau (1684–1721). These activities eventually financed his trip to Italy.

Boucher left for Italy in 1728 and stayed for four years. His previous training as an engraver, and the skills he acquired as a draftsman under Jean Francois Cars proved to be a solid foundation for his studies in Italy. He learned the technique of the masters of the Baroque, Caravaggio, Rubens, Rembrandt, Giordano and Tiepolo. Boucher returned to Paris in 1731 and entered the Royal Academy of Painting and Sculpture as a historical painter. Boucher increasingly turned his attention to large-scale mythological painting and soon found official recognition in the form of royal commissions. In just three short years, Boucher left the role of student and became one of the members of the prestigious faculty with the diploma piece Rinaldo and Armida.

In 1733 Boucher married Marie Jeanne Buzeau, who frequently modeled for his paintings. Two girls and a boy were born of the marriage. Juste, the son, died at a young age; both daughters, Elizabeth Victoire and Marie Emilie, married pupils of Boucher: the painters Jean Baptiste Deshays and Pierre Antoine Boudouin, both of whom predeceased their father-in-law.[3] 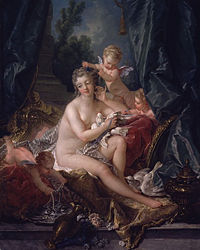 The Toilet of Venus (1751) typifies the superficially pleasing elegance of Boucher's mature style.

By far, Boucher's biggest fan was that of Madame de Pompadour (mistress of King Louis XV). She adored his drawings, paintings, and especially the portraits he created of her. During the course of their acquaintance Boucher painted numerous portraits of Madame Pompadour. The artist became her friend and teacher, instructing her in drawing and etching and serving as artistic counselor for her art purchases. Boucher decorated her several residences, most notably the châteaux of Bellevue and Crécy. Thanks to the patronage of Madame de Pompadour and her brother, the Marquis de Marigny, Director of the King's Buildings, the painter soon enjoyed the favor of Louis XV.[4]

In 1755 he was appointed head of the royal tapestry manufactory at Gobelins. Boucher reached the pinnacle of success in 1765 when he was appointed to the two highest positions in the French arts establishment: First Painter to the king and director of the Royal Academy.

Boucher's artistic talents were many. In addition to his paintings, Boucher participated in designing costumes and sets for several Parisian theaters. He loved designing the comic operas of Favart (1710-1792), and the sets were easily recognizable as his. His whimsical, signature style was clear in all he did. Boucher also tried his hand in designing tapestries. He created pieces for the royal palaces of Versailles, Fontainebleau and Choisy. His designs were successful and sought after. Many of his paintings were made into engravings and reproduced on canvases, porcelain and biscuit-ware at the Vincennes and Sèvres factories. He was one of the first artists to be able to successfully exploit his commercial value.

Previously French artists had been prohibited from showing female nudes under an edict from King Louis XIV. Only males were allowed to model nude in front of male artists. Boucher used prostitutes to model for him, which also earned Diderot's rebuke.[5]

Many of his works are depictions of mythological paradises in which pretty, full-figured, and sometimes nude goddesses are portrayed in lush backgrounds. Turning away from the solemn Christian subjects that dominated the preceding Baroque era, Boucher's art was criticized for stimulating the viewer to thoughts of pleasure and delight.

On May 30, 1770, Francois Boucher died in Paris. His lifelong devotion to painting in the French Rococo style gained him the fame of being the top artist in that genre.

The Louvre and the Wallace Collection, London, have excellent selections of Boucher's work. He is well represented in the United States by his Toilet of Venus and Birth and Triumph of Venus in the Metropolitan Museum, New York City. Examples of his work are also found in the Frick Collection, New York City, and the Philadelphia Museum of Art. 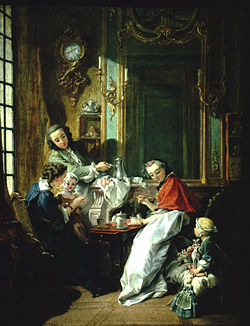 Retrieved from https://www.newworldencyclopedia.org/p/index.php?title=Francois_Boucher&oldid=1080709
Categories:
Hidden category:
This page was last edited on 1 October 2022, at 18:47.
Content is available under Creative Commons Attribution/Share-Alike License; additional terms may apply. See Terms of Use for details.