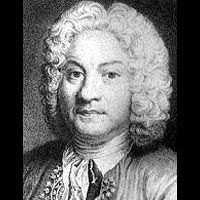 François Couperin (French IPA: [fʀɑ̃'swa ku'pʀɛ̃]) (November 10, 1668 – September 11, 1733) was a French Baroque composer, organist and harpsichordist. He was known as "Couperin le Grand" to distinguish him from the other members of the musically talented Couperin family.

Francois Couperin excelled as a talented musician and was pre-eminent in France in the early eighteenth century. His sacred music, chamber compositions, and keyboard pieces occupied important positions in French musical history as examples of how sacred and secular music, i.e. organ masses and music for harpsichord, can co-exist in mutually fulfilling partnerships.

By the end of the eighteenth century, Couperin had established a reputation as a major figure in French musical circles and became known as "the French Bach." Bach himself was strongly influenced by Couperin's technique and theoretical work, expressed in his The Art of Harpsichord Playing. Composers such as Vincent d’Indy, Hector Berlioz, Johannes Brahms, and Maurice Ravel were deeply enamored with Couperin's music and paid tribute to him by creating or publishing works based on his compositions.

Born in Paris on November 10, 1668, Couperin was taught by his father, Charles Couperin, who died when François was ten, and by Jacques Thomelin. In 1685 he became the organist at the church of Saint-Gervais, Paris, a post he inherited from his father and that he would pass on to his cousin, Nicolas Couperin. Other members of the family would hold the same position in later years. In 1693 Couperin succeeded his teacher Thomelin as organist at the Chapelle Royale (Royal Chapel) with the title organiste du Roi, organist by appointment to the King. This was the Sun King, Louis XIV.

Couperin held the Italian composer Arcangelo Corelli in high regard.

Francois Couperin's sacred music represents a significant part of his early maturation as a composer. Among his important early works in this genre include two organ masses, the Messe pour le paroisses and the Messe pur le convents.

His sacred works also include 34 motets as well as the Lecon de ténèbres composed for the office of matins during Holy Week.

In the court of the "Sun King"

In 1717 Couperin became court organist and composer, with the title ordinaire de la musique de la chambre du Roi. With his colleagues, Couperin gave a weekly concert, typically on Sunday. Many of these concerts were in the form of suites for violin, viol, oboe, bassoon and harpsichord, on which he was a virtuoso player.

Couperin is acknowledged as one of the few French composers who thought highly of the Italian musical tradition. Couperin acknowledged his debt to the Italian composer Corelli (1653-1713). He introduced Corelli's trio sonata form to France. Couperin's grand trio sonata was subtitled Le Parnasse, ou l'Apothéose de Corelli (Parnassus, or the Apotheosis of Corelli). In it he blended the Italian and French styles of music in a set of pieces which he called Les Goûts réunis ("Styles Reunited").

J.S. Bach was strongly influenced by Couperin's technique and theory of musical ornamentation.

According to music historian Richard Taruskin, Couperin's harpsichord works "are often regarded as prime examples of the Roccoco style, in which the heroic dimensions of the Baroque were cut down to a more human scale, and where a graceful decorativeness and sweet intimacy of expression were prized above all, a condition in which "it is better to be moved than to be astonished."

Couperin himself spoke to this in his essay on harpsichord technique: "Experience has taught me that (being) vigorous, (and being) able to execute the quickest and lightest things, are not always most successful in tender and sensitive pieces, and I will candidly confess that I like that which stirs my feelings much better than which astonishes me."

"I will always be thankful to those who, by means of infinite artistry borne up by good taste, shall succeed in making the instrument capable of expression," he continued. "that was my ancestors' endeavor, apart from the good workmanship of their compositions: I have attempted to perfect their discoveries, their works continue to be favored by persons of exquisite taste."

Couperin's four volumes of harpsichord music contain over 230 individual pieces, which can be played on solo harpsichord or performed as small chamber works. These were loved by J.S. Bach and, much later, Richard Strauss, as well as Maurice Ravel, who memorialized their composer with Le Tombeau de Couperin (A Memorial to Couperin).

Many of Couperin's keyboard pieces have evocative, picturesque titles and express a mood through key choices, adventurous harmonies and (resolved) discords. They have been likened to miniature tone poems. These features attracted Richard Strauss who orchestrated some of them.

Johannes Brahms's piano music was also influenced by the keyboard music of Couperin. Brahms performed Couperin's music in public and contributed to the first complete edition of Couperin's Pièces de clavecin by Friedrich Chrysander in the 1880s.

As early-music expert Jordi Savall has pointed out, Couperin was the "poet musician par excellence." He believed in "the ability of Music (with a capital M) to express itself in sa prose et ses vers" (prose and poetry). Couplerin believed that if we enter into the poetry of music, we discover that it is "plus belle encore que la beauté" (more beautiful than beauty itself).

As mentioned above, Francois Couperin was among the few French musicians who looked at Italian composers with a kind eye and ear. Knowing that there was a certain hostility among the French musical elite toward the Italian style, Couperin introduced his earliest instrumental sonata (for two violins and basso continuo) under the Italian sounding pseudonym (e.g. Rupercino) which was in reality an anagram using the letters of his own name. He concocted the further fiction that the work was commissioned by the King of Sardinia, an island in the Mediterranean Sea near the French island of Corsica. The sonata was received by the French public with great enthusiasm and brought Couperin added confidence to continue his development of the sonata style.

The composer wrote about this episode: "...my Italianized name brought me, behind the mask, as it were, great applause. My sonatas, fortunately, have enjoyed sufficient popularity so that my ruse has caused me no embarrassment. I have compared these first sonatas with those I have written since, and I have not seen fit to alter... anything much... I hope the public is pleased with them." Couperin became a major contributor to the bridging of the French and Italian music styles.

More generally, his influence on the playing style and theory of Bach; and the appreciation shown him by later major composers bear testimony not only to his personal genius, but to his lasting musical legacy.