Jacobus Henricus van 't Hoff (August 30, 1852 - March 1, 1911), a Dutch physical and organic chemist, was the first to propose a three-dimensional model for the structure of simple carbon compounds. He applied the principles of physics to calculate the speed of chemical reactions, and showed that solutions obey many of the same laws as gases. He believed that imagination plays an important role in the process of scientific work.[1] Van 't Hoff received the first Nobel Prize for chemistry in 1901 for his work on solutions.

From a young age he was interested in science and nature. He frequently took part in botanical excursions, and his receptiveness for philosophy and his predilection for poetry were already apparent in his early school years.

His early education was taken in the Realschule in Rotterdam. When he was 17, against the wishes of his father, he went to study chemistry at the Delft Polytechnic Institute. He completed the three-year course there in two years, and when he was 19, enrolled at the University of Leiden, remaining there for a year, after which studied in Bonn, Germany with Friedrich August Kekule, then in Paris with Charles-Adolphe Wurtz. He returned to Holland, finally receiving his doctorate at the University of Utrecht in 1874 at age 22.

It was while he was at Utrecht that he created an upheaval in chemistry by proposing a three-dimensional model for the structure of a class of carbon compounds. He shares credit for this idea with the French chemist Le Bel, who independently came up with the same idea at about the same time but published his conclusions later than van 't Hoff.

Van 't Hoff later expanded this idea to account for the optical activity of some carbon compounds in the liquid state and in solution. These discoveries opened the way for the new science of stereochemistry, which has as its study the three-dimensional arrangement of atoms in a chemical compound.

In 1876, van 't Hoff went to Utrecht to teach physics at the veterinary college there. In 1877, he lectured at the University of Amsterdam, and became a full professor the following year, a post he would retain until 1896. In 1878, Van 't Hoff married Johanna Francina Mees. They had two daughters, Johanna Francina and Aleida Jacoba, and two sons, Jacobus Hendricus and Govert Jacob.

In 1884, van 't Hoff published his research on chemical kinetics, naming it Studies in Chemical Dynamics. In this work, he shows the relationship between the concentration of compounds in a chemical reaction and the rate at which the reaction proceeds. He was also able to show how the science of thermodynamics can be applied to chemical equilibrium. Van 't Hoff also discussed in this work the speed of a chemical reaction and its relation to temperature.

In 1885, he was appointed member of the Royal Netherlands Academy of Sciences.

In 1886, van 't Hoff published a series of papers in which he showed that the same laws that apply to gases can be used to understand the behavior of solutions. This also enabled him to apply the principles of thermodynamics to solutions.

His findings did not, however, apply to electrolytes—chemicals like salt that are believed to break up into electrically charged portions called ions upon entering a solution. Svante Arrhenius solved the problem of electrolytes around the same time.

Until 1895, van 't Hoff worked on Arrhenius's theory of the dissociation of electrolytes. In 1896, he became professor to the Prussian Academy of Science at Berlin. His studies of the salt deposits at Stassfurt contributed to Prussia's chemical industry. In these, he was able to apply results established in the laboratory to draw conclusions about the formation of salt deposits over geologic epochs.

In 1896, he was invited to take a professorship at the University of Berlin, and was elected into the membership of the Imperial Academy of Sciences. In Berlin his teaching duties only required him to lecture once a week. The rest of his time was spent at a research facility provided by the academy. Van 't Hoff was elected as a foreign member of the Royal Society of London in 1897.

In 1901, he received the first Nobel Prize in Chemistry for his work with solutions.

Other distinctions included the honorary doctorates of Harvard and Yale 1901, Victoria University, Manchester 1903, Heidelberg 1908; the Davy Medal of the Royal Society 1893 (along with Le Bel), Helmholtz Medal of the Prussian Academy of Sciences 1911; he was also appointed Chevalier de la Legion d'Honneur 1894, Senator der Kaiser-Wilhelm-Gesellschaft (1911). Van 't Hoff was also honorary member of the British Chemical Society in London, the Royal Academy of Sciences, in Göttingen 1892, American Chemical Society 1898, and the Académie des Sciences, in Paris 1905. 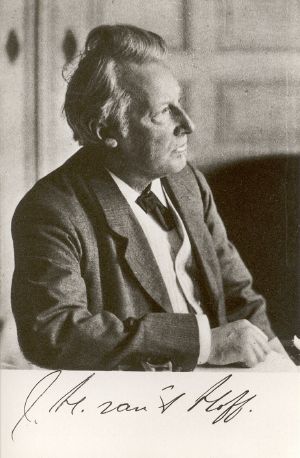 Methane was known to consist of four atoms of hydrogen and one of carbon. It had also been determined that it was a symmetrical compound, meaning that in chemical reactions, other chemicals did not discriminate as to which hydrogen atom they would react to. Van 't Hoff quickly concluded that the only spatial arrangement consistent with this finding was one where the carbon atom lay at the center of a regular tetrahedron (a four-sided figure with equilateral triangles as sides) with each of the other four molecules at a corner of the tetrahedron. This was the first peek that scientists had ventured to take into the three-dimensional structure of molecules.

Van 't Hoff claimed as the inspiration for his discovery, Johannes Wislicenus's studies on lactic acid, in which he declares that differences in some chemical properties may be attributable to structural differences in their molecules. On the other hand, Joseph Achille Le Bel, who, incidentally, had studied with van 't Hoff under Kekule, and who published a similar conclusion to van 't Hoff, claimed Louis Pasteur as his inspiration.

One property chemists had trouble explaining was the optical activity of different substances in solution. A beam of light is said to be polarized when, according to the wave theory of light, all the waves are in the same plane. Jean-Baptiste Biot had established in the early nineteenth century that when a beam of polarized light passes through the solutions of some organic compounds, the plane of polarization of the light is rotated, sometimes to the right, sometimes to the left. He postulated that this could be due to the lack of symmetry in the structure of the molecules, meaning that the molecules must have a left-hand and right-hand side that are distinguishable from one another. Louis Pasteur surveyed a large number of substances that exhibit this property, and found that they all consisted of a carbon atom surrounded by atoms of more than one element. Van 't Hoff showed how his stereochemical model of carbon compounds could account for this property.

Van 't Hoff's exploration of the factors that drive the speed of chemical reactions were of major importance to the chemical industry, and to the establishment of the field of physical chemistry.

Upon studying the lives of famous scientists, van 't Hoff concluded that imagination plays an all-important role in the ability of a researcher to make new discoveries.