Isma'il bin Jafar (Arabic: إسماعيل بن جعفر, c. 721 C.E./103 AH - 755 C.E./138 AH) was the eldest son of the sixth Shi'a Imam, Ja'far al-Sadiq. Isma'il bin Ja'far is considered to be the seventh Ismaili Imam although, since he predeceased his father, he never actually functioned in the capacity of Imam. Ismail himself died before he had a chance to leave a mark on history, at least in terms of his own actions. In fact, quite a number of Ismaili Imams had to keep their identity secret, so very little is known about their biographies. In some respects, their most important responsibility was to survive as a symbol of hope, identity and as a source of guidance, even if this was inaccessible, for their communities. Often, Dais (missionary or deputies) operated on their behalf in the community. Nonetheless, a lineage that traces its descent from Ismail gave leadership to the community that bears his name down the centuries. Today, his heirs advocate a tolerant expression of Islam that stresses the equality of all people, people's right to dignity, freedom and a decent standard of living. He was succeeded by his son, Muhammad. To a certain degree, the question of the legitimacy of his Imamate has been the subject of cultural war between Twelvers and Ismailis and some descriptions of his character reflect this dispute.

He was born in Shawwal in 100 AH/719 C.E. To protect him from persecution, his father sent him into hiding and publicly declared him deceased. The majority Twelver groups however argue that Ismail actually died, and that the funeral was not a fraud. He died during the Imamat of Imam Ja'far al- Sadiq in the year 138 AH/756 C.E. Ismaili sources say that after the age of seven, as the designated successor, Ismail was kept apart from his siblings, limited his contact with the public and took personal responsibility for his education. Given the 6th Imams own reputation as a scholar and the number of distinguished students who sought out his tuition, Ismail would have received high quality training. It is also said that whenever he was ill and unable to fulfill his duties as Imam he deputized Ismail, although this role was restricted to the confines of the residence. According to Daftary, Ismail may have taken part in an anti-Abbasid plot in 755 and identified with the more activist, or militant Shi'a (some of whom split off as the Zaydis).[1] He may have been summoned to the Caliph's court with others to face charges but according to Daftary he was spared execution, unlike some of his fellow plotters.[2] In about 762, Ismail may have let Madina for Basra, although this is disputed. He is said to have had a full grasp of the esoteric truth, the inner message of Islam. He was succeeded by his son, Muhammad, as the 8th Ismaili Imam, who was about 22 at the time. Some Ismailis believe that Muhammad bin Ismail became "Hidden" and will return as the Mahdi, to establish universal peace and justice. According to Daftary, he may have led a revolt against the Abbasids in 815, "and died shortly afterwards."[3] He probably lived in "southwestern Persia ... from where he dispatched his own Dais to adjoining areas."[4]

Dispute over the Succession 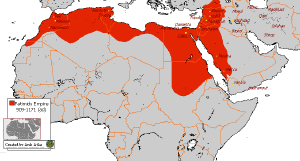 The Fatimid Empire at its peak, ruled by descendants of Ismail bin Jaffar. It was during this period that Ismaili Islam took shape, developing and propagating its doctrines.

Some sources indicate that the Imam Jafar as-Sadiq designated Ismail as his successor and the next Imam after him. According to Ismaili sources, Jafar repeatedly designated him as his successor but there was also some secrecy attached to this because the Sunni Caliphs were determined to "expunge the Alids from the state," and so were very interested to know the identity of the next Imam.[5] According to one scholar, "The question of the successor to the Imam (Jafar Sadik)" had been "made particularly difficult by the fact that the Abbasid caliph al-Mansur had decided to scourge to death whoever was to be chosen officially by the Imam as his successor thereby hoping to put an end to the Shiite movement."[6] However, it is also believed that Ismail died before his father. Therefore, upon as-Sadiq's death, some Shi’i followers turned to the eldest surviving son of al-Sadiq, Abd-Allah, who claimed a second designation. When Abd-Allah died within weeks without an heir, many turned again to another son of as-Sadiq, Musa al-Kazim, while some had already accepted him as the Imam previously. This crisis of succession led to doubts about the true designation of Jafar as-Sadiq and many clung to the original designation of Isma’il and proclaimed the son of Isma’il. Some accounts refer to a mock funeral, so that it would appear that Ismail had died as a device to protect his identity. Others suggest that no such mock funeral took place but that the funeral of Abd-Allah, whose appearance closely resembled that of Ismail, might have been mistaken for Ismail's. The issue of designation is vital for Shi'a Muslims because (except for Zaydi or Zaidi Shi'a) the Imam must be appointed by his divinely inspired predecessor. This is known as nass. Some Shi'a hold that once given, nass cannot be withdrawn. Ismailis have therefore traditionally questioned the legitimacy of the twelver succession following Ja'far as-Sadiq's death. The 6th Imam, who did much to develop the details of the doctrine of the Imamate, is reported to have described succession as follows, all of which would make it difficult to change the designation:

There was also debate about whether Ismail's behavior was suitable for the Imamate. In this view, he had been "passed over" because of unsuitability, reportedly having once been discovered in an intoxicated state.[8] Daftary describes reports of dipsomania as "anti-Ismaili."[9]It is not surprising, he says, that those who dispute his Imamate represent him "as a reprobate."[10]

The minority, who believe that Isma'il was the rightful successor to Jafar are known as Ismailis, while the majority of followers of Musa Al-Kazim are known as Twelvers. They went on to recognize five more Imams after Musa—making twelve Imams in total. The Nizari Ismaili Shias follow a living Imam directly descended from Imam Isma'il ibn Jafar and Imam Ali ibn Abi Talib.

The split in succession following the 6th Imam's death was not the first. Earlier, after the death of the fourth Imam, choosing Zayd as their 5th Imam because they thought he would be more militant in opposing the Caliph. He had led a rebellion, while Muhammad al-Baqir (whom the majority followed) was politically passive. They Zaydis believe that the Imam will emerge, so reject designation. They do not ascribe supernatural qualities to their Imams and justify the removal of a corrupt or incompetent Imam. They established a state in Yemen, where a succession of Imams ruled until the last Imam (who was also King) was deposed in a republican coup in 1962. 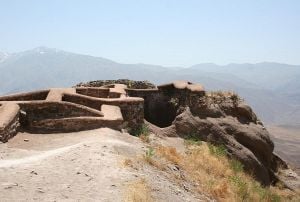 Alamut, the hill-top fortress in North Iran where the Ismaili Imams took refuge from circa 1090 until it fell in 1256.

The Ismaili Imams are today known as the Aga Khans—the present (hadir) Imam being Shah Karim al-Husayni—or Aga Khan IV. The Ismailis, like all Shi'a, often lived as a minority under Sunni rule keeping their identity and that of their Imam a secret. However, under the Fatimids in Egypt, when they were rivals of the Abbasids, the Ismaili Imams were able to reveal their identity. Several schisms took place during the history of the Ismaili community, which dispersed following the collapse of the Fatimids. That was the last time that Ismaili Imams exercised political as well as spiritual authority. However, the succession of Imams continued down through the centuries; they are regarded as inspired and as infallible by their followers. He is known as the "present" (or living Imam), since the 12th Imam of the majority of Shi'a, who went into "occultation" in 940 C.E. is referred to as the "Hidden Iman." In theory, the Iman's authority is "absolute; in practice it covers religious and community matters." After the collapse of the Fatimids, the Nizari lineage of Imams took refuge with the mini-state at Alamut led initially by Hasan i-Sabbah (1090–1124) where for some time their identity was again hidden, until Imam Hassan II, the 23rd Ismaili Imam who died in 1166. The line appears to have settled in Persia in the fifteenth century with the 29th Imam. The term "Nizari" is from the name of the 19th Imam, Nizār ibn al-Mustanṣir billāh, son of al-Mustansir, who died in prison 1094. He was not recognized by the Mustaali, who broke away under a different succession.

Western writers about Alamut focus on the Assassins who operated from there. Ismailis emphasize its role as a refuge for those fleeing from the Mongols, regardless of their religion, its libraries and patronage of learning, continuing the tradition that had founded Al-Azhar in Cairo.

Ismail himself died before he had a chance to leave a mark on history as a result of his own actions. Nonetheless, a lineage that traces its descent from him has given leadership to the community that bears his name down the centuries. Today, his heirs advocate a tolerant expression of Islam that stresses the equality of all people, people's right to dignity, freedom and a decent standard of living. They root this tradition in the historical legacy of the Fatimid period (where, with some exceptions, different faiths co-existed harmoniously) and in the Alumut legacy as well. To what degree Ismail bin Jaffar shares credit for this outlook is dubious. However, he does stand at the beginning of this tradition, which continues to revere his heirs.