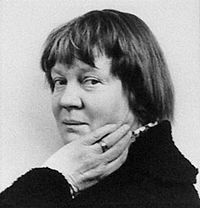 Dame Jean Iris Murdoch DBE (July 15, 1919 – February 8, 1999) was an Irish-born British writer and philosopher, best known for her novels, which combine rich characterization and compelling plotlines, usually involving ethical or sexual themes, treating issues of good and evil which are played out in the context of everyday modern life, and occasionally introducing elements of the supernatural as well. Her first published novel, Under the Net, was selected in 2001 by the editorial board of the American Modern Library as one of the 100 best English-language novels of the twentieth century. In 1987, she was made a Dame Commander of the Order of the British Empire.

Murdoch was born at 59 Blessington Street, Dublin, Ireland, on July 15, 1919. Her father, Wills John Hughes Murdoch came from a mainly Presbyterian sheep farming family from Hillhall, County Down (near Belfast). Her mother, Irene Alice Richardson, who had trained as a singer until Iris' birth, was from a middle class Anglican Church of Ireland family from Dublin. At a young age, Murdoch's parents moved her to London where her father worked in the Civil Service. Murdoch was educated in progressive schools, firstly, at the Froebel Demonstration School, and then as a boarder at the Badminton School in Bristol in 1932. She went on to read classics, ancient history, and philosophy at Somerville College, Oxford, and philosophy as a postgraduate at Newnham College, Cambridge, where she studied under Ludwig Wittgenstein. In 1948, she became a fellow of St Anne's College, Oxford.

She wrote her first novel, Under The Net in 1954, having previously published essays on philosophy, including the first study in English of Jean-Paul Sartre. It was at Oxford in 1956 that she met and married John Bayley, a professor of English literature and also a novelist. She went on to produce 25 more novels and other works of philosophy and drama until 1995, when she began to suffer the early effects of Alzheimer's disease, which she at first attributed to writer's block. She died at 79 in 1999.

Murdoch's novels are by turns intense and bizarre, filled with dark humor and unpredictable plot twists, undercutting the civilized surface of the usually upper-class milieu in which her characters are observed. Above all they deal with issues of morality, and the conflicts between good and evil are often presented in mundane scenes that gain mythic and tragic force through the subtlety with which they are depicted. Though intellectually sophisticated, her novels are often melodramatic and comedic, rooted, she famously said, in the desire to tell a "jolly good yarn." She was strongly influenced by philosophers like Plato, Freud, Simone Weil, and Jean-Paul Sartre, and by the nineteenth century English and Russian novelists. Her novels often included gay characters, empathetic pets, and sometimes a powerful and almost demonic male "enchanter" who imposes his will on the other characters—a type of man Murdoch is said to have modeled on her lover, the Nobel laureate, Elias Canetti.

Although she wrote primarily in a realistic manner, on occasion Murdoch would introduce ambiguity into her work through a sometimes misleading use of symbolism, and by mixing elements of fantasy within her precisely described scenes. The Unicorn (1963) can be read and enjoyed as a sophisticated Gothic romance, or as a novel with Gothic trappings, or perhaps as a parody of the Gothic mode of writing. The Black Prince (1973) is a remarkable study of erotic obsession, and the text becomes more complicated, suggesting multiple interpretations, when subordinate characters contradict the narrator and the mysterious "editor" of the book in a series of afterwords.

Murdoch was awarded the Booker Prize in 1978 for The Sea, the Sea, a finely detailed novel about the power of love and loss, featuring a retired stage director who is overwhelmed by jealousy when he meets his erstwhile lover after several decades apart.

Several of her works have been adapted for the screen, including the British television series of her novels An Unofficial Rose and The Bell. J. B. Priestley dramatized her 1961 novel, A Severed Head, which was directed by Richard Attenborough in 1971, and starred Ian Holm. Richard Eyre's film, Iris (2001), based on her husband's memoir of his wife as she developed Alzheimer's disease, starred Dame Judi Dench and Kate Winslet respectively as the older and younger versions of Dame Iris Murdoch.

Retrieved from https://www.newworldencyclopedia.org/p/index.php?title=Iris_Murdoch&oldid=1009541
Categories:
Hidden category:
This page was last edited on 6 March 2018, at 00:37.
Content is available under Creative Commons Attribution/Share-Alike License; additional terms may apply. See Terms of Use for details.