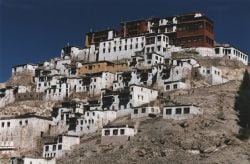 The Tikse Buddhist monastery in Ladakh, India
The term monastery denotes the buildings of a community of monastics (monks or nuns), varying from a small dwelling accommodating only a hermit to vast complexes and estates housing thousands. In most religions, monasteries are governed by community rules that stipulate the gender of the inhabitants and require them to remain celibate and own little or no personal property. The degree to which life inside a particular monastery is socially separate from the surrounding populace varies widely, from isolation for purposes of contemplation, to providing services to the local community.
Popular Article: Spacetime

Three-dimensional analogy of space-time distortion
In classical physics, space and time are assumed to be quite different. This agrees with our everyday experience, the commonsense difference between our experience of time and space. Modern physics tells us that this difference is an illusion, that time cannot be separated from the three dimensions of space, a phenomenon that becomes apparent for observers traveling at very high speeds. The three dimensions of space and the one dimension of time combine into a single four-dimensional manifold, called the space-time continuum.
Did you know?