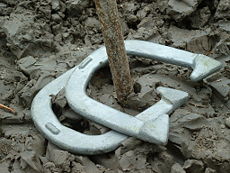 Horseshoes is an outdoor game with players alternating turns tossing horseshoes at stakes in the ground. When a horseshoe encircles the stake it is called a "ringer" and counts three points. One point is allowed for the shoe closest to the stake as long as it is within the width of the shoe itself. A winning score in a regulation games is 40, while informal games having winning scores up to 15 or 21.

The roots of the game horseshoes may be found in ancient contests such as the discus throw and quoits. As early as the second century B.C.E., shoes made of iron plates or rings that were nailed on horses' feet and used by Roman camp followers in pitching games. The game grew in popularity in the U.S. during the American Civil War. In 1869, England set up rules to govern the game. In 1910, the first world horseshoe-pitching tournament was held in Bronson, Kansas, and the Grand League of the National Horseshoe Pitchers Association was founded in 1914.

The official association governing the game in the U.S. and Canada today is the National Horseshoe Pitchers Association. There are about 15,000 NHPA members, with some 6,200 in the league program. Over 15 million horseshoe enthusiasts are estimated to play either officially or informally in the United States and Canada. 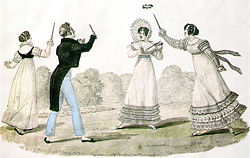 One form of the ring-toss game of quoits 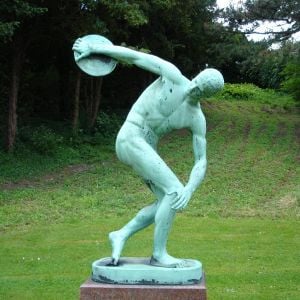 It is fairly well established that horseshoe pitching had its origin in the game of quoits (involving the throwing of a metal or rubber ring over a set distance to land over a pin) and that quoits is a modification of the old Grecian game of discus throwing, known from the Olympic Games.

Iron plates or rings for shoes may have been nailed on horses' feet in Western Asia and Eastern Europe as early as the second century B.C.E. It is thought that camp followers of the Grecian armies, who could not afford the discus, took discarded horseshoes, set up a stake, and began throwing horseshoes at it. Horseshoes historians have been unable to discover when the game was changed so that it was pitched at two stakes.

The game seemed to have been a favorite among soldiers in many wars, where horseshoes were often plentiful. Returning home, these soldiers interested their home folks in the game, and horseshoe-pitching courts were laid out in hundreds of cities, villages, and farming communities. In the U.S., the impetus for the National Horseshoe Pitcher's Association (NHPA) grew out of the tradition of throwing mule shoes in the Union Army camps during the American Civil War. Courts later sprang up in the backyards of Union states. Rules differences arose regionally, however.

In 1869, England set up rules to govern the game. The distance between the stakes was 19 yards. The player stood level with the stake and made his pitch with his first step. There was no weight requirement for the shoe, but the outside diameter could not be more than eight inches. The ground around the stake was clay, and all measurements for points were taken between the nearest parts of both shoe and stake. These also became the rules under which the game was played in the United States, but no tournaments were held or records kept until 1909.

The first known world horseshoe-pitching tournament was in the summer of 1910 in Bronson, Kansas. The winner was Frank Jackson, who was awarded a world championship belt with horseshoes attached to it. The games were played on dirt courts with stakes two inches high above the level ground with stakes 38 feet apart.

In 1911, the height of the stake was raised to six inches, with the same scoring system with the closest shoe counting one regardless of the distance from the stake. The top ringer—meaning the last ringer of the round—received the count of all ringers on the stake. Games were to 21 points.

The first ruling body of horseshoe pitching was organized in a court room in Kansas City, Kansas, May 16, 1914. Named the Grand League of the American Horseshoe Pitchers Association, it granted charters to local leagues in many states and its rules were accepted as standard in governing all regular horseshoe pitching tournaments. The stake height was raised to eight inches, which met with the approval of most pitchers, and the weight of shoes was standardized. Thus, in the 1915 annual tournament, no shoes were used that weighed less than two pounds or more than two pounds, two ounces. "Leaners" counted three points, ringers five points, and shoes within six inches from the stake would count one point. The limits of the pitcher's box were set at three feet each side of the stake and six feet back, and the pitcher could stand anywhere in the box. Stakes were 38 feet apart.

The association published a book titled the Horseshoe Guide, which contained playing rules, officers, a report of the annual convention and the annual tournament, and news of other contests. On February 26, 1919, the National League of Horseshoe and Quoit Pitchers was organized at the national tournament in St. Petersburg, Florida, with representatives from 29 different states attending. The league was given a charter under the laws of the State of Ohio, June 17, 1921.

In the 1919 tournament, the distance from each stake was changed to 40 feet, which is in effect today. Games were 50 points. In 1920, the game rules were changed drastically. Stakes were raised to 10 inches, stakes were one inch in diameter, ringers counted three points, close shoes one point, and leaners were abolished, counting the same as any close show.

The 1920 winter and 1923 summer world champion, George May from Akron, Ohio, is considered the father of the "open" shoe style, meaning that his pitch was designed to approach the stake with the open side of the shoe facing the stake. He won the title in 1923 with a 14-1 record and a 60-ringer percentage per pitch.

However, in the winter of 1909, a game was played in Florida in the sand where sometimes all four shoes would bury themselves so deep in the sand that they would all be covered out of sight. While digging out the shoes that had been pitched by Dr. F.N. Robinson from New York, and one of the pitchers who was digging out the shoes made a new discovery and said, "Doc, your shoes all come fork to." This had never been previously noticed even by the doctor himself. The other pitchers then began to question the doctor to find out how he did it, but the doctor didn't know, only that it became natural to him to release his shoe so that it fell open toward the peg with a one and a quarter turn. He had held the shoe with his first finger around the heel calk as all others did at the time. As far as is known, this was the beginning of trying to control the open shoe in pitching, now known by every good pitcher. 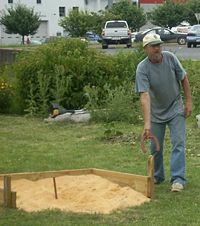 Teig Hogan tossing a horseshoe at the "Our Community Place Lawn Jam," in Harrisonburg, Virginia (June 28, 2008).

On May 10, 1921, the National Horseshoe Pitchers Association of the United States was incorporated under the laws of the State of Ohio with headquarters at Akron, Ohio. Within two years, the two national organizations were consolidated under the name of the latter. At the national convention at Lake Worth, Florida, February 16, 1925, the name was changed to the National Horseshoe Pitchers Association of America. It was not until the late 1930s or early 1940s that the stake was raised to 12 inches, and in 1950, the stake was ruled to be between 14 and 15 inches high. The present-day rule of 40 points for an official game was made effective January 1, 1982, the last major rule change governing play.

The game begins with a coin toss to decide who goes first. The winner of the toss throws both horseshoes at the opposite stake, and then the second player throws both of his horseshoes at his end. After scoring, the next round is done in reverse order, or by throwing back at the original stake. Play continues until one player has at least 15 points at the end of a round. NHPA-sanctioned games are generally played to 40 points, or to a pitch limit of 40 or 50 shoes. The game is divided into innings, each consists of four pitched shoes; two by each contestant.

There are two ways to score: By throwing a "ringer" (a shoe that comes to rest while encircling the stake), or by throwing the horseshoe nearest to the opposite stake. This scoring system gives rise to the popular expression "Close only counts in horseshoes and hand grenades." Disputes are settled by using a straightedge to touch the two ends of the horseshoe, called "heel calks." If the straightedge does not touch the stake, then the horseshoe is a ringer.

The nearest horseshoe to the stake within six inches counts one point. If both of one player's horseshoes are closer than the opponent's, that player scores two points. A ringer scores three points. A leaner, the case where a horseshoe literally leans on the stake, counts for one point in the official rules. In amateur games, a leaner usually counts for two points. In the case of one ringer and a closer horseshoe, both horseshoes are scored for a total of four points. If a player throws two ringers, that player scores six points. If each player throws a ringer, the ringers cancel and no points are scored. Such occurrences are called dead but are still used towards the ringer-per-pitch average.

It is estimated that upwards of 15 million enthusiasts enjoy pitching horseshoes in the United States and Canada in tournaments, leagues, recreation areas, and backyards. The NHPA membership totals about 15,000 with 6,200 in the league program.

This successful handicap league program allows beginners as well as seasoned players to pitch together. It is a good program for attracting new players to take their first step into organized horseshoe pitching. The NHPA strives to promote and organize the sport and to standardize the rules, equipment, and playing procedures. The top priority is to serve as a unifying agent between state associations, local clubs, unorganized groups, and individual players. Indoor courts are constantly becoming more popular. Year after year, more indoor courts are being built in the non-sunbelt areas. These courts make horseshoe pitching a year-round sport.

Besides World Tournament Awards, championship awards are given at all NHPA sanctioned tournaments, and numerous awards in many categories are given to the NHPA League program. Six classes are recognized as Championship. They are: men, women, boys, girls, senior men, and elders (70-plus-years old and pitch from 30 feet). Women and juniors also pitch from 30 feet. Senior women's classes are held when enough entries are received to support the division. Contributed by David Sullivan from the National Horseshoe Pitchers Association (NHPA).