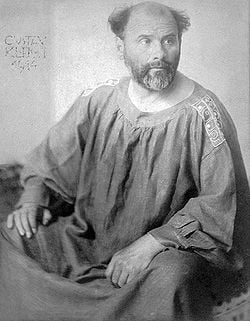 Gustav Klimt (July 14, 1862 – February 6, 1918) was an Austrian Symbolist painter and one of the most prominent members of the Vienna Art Nouveau (Vienna Secession) movement. His major works include paintings, murals, sketches and other art objects, many of which are on display in the Vienna Secession gallery. Klimt's primary subject was the female body, "The most important element of his fame is his reputation as a master of eroticism." [1] and his works are marked by a frank eroticism–nowhere is this more apparent than in his numerous drawings in pencil. These female subjects, whether formal portraits or indolent nudes, invariably display a highly sensitized fin de siècle elegance.

Klimt's work was a move away from naturalism, the depiction of realistic objects in a natural setting. The Realism movement of the nineteenth century advocated naturalism in reaction to the stylized and idealized depictions of subjects in Romanticism. Klimt's work sought to break this connection, preferring a more symbolic mode of expression.

Gustav Klimt was born in Baumgarten, near Vienna, Austria, the second of seven children– three boys and four girls.[2] His father, Ernst Klimt, was an engraver who married Anna Klimt (née Finster). Klimt lived in poverty for most of his childhood.

He enrolled in the Vienna School of Arts and Crafts (Kunstgewerbeschule) in 1876, where he studied until 1883, receiving training as an architectural decorator. In 1877 his brother Ernst, who, like his father, would become an engraver, also enrolled in the school. The two brothers and their friend Franz Matsch began working together and by 1880 the three had received numerous commissions. Klimt began his professional career painting interior murals in large public buildings on the Ringstraße, which has always been the heart of Vienna, near a major cathedral, art museums, and of course, cafés, where "Café Society," as the stylish life of luxury and idleness practiced by the upper classes, had begun. It was the socialite Adele, the 25-year-old wife of Klimt's patron Ferdinand Bloch-Bauer, who was the model for the painting that bears her name.

In 1888 Klimt received the Golden order of Merit from Emperor Franz Josef I of Austria for his contributions to art. He also became an honorary member of the University of Munich and the University of Vienna. In 1892 both his father and brother Ernst died. It was in the early 1890s that Klimt met Emilie Flöge, the young sister of his brother's widow, for whom he became custodian after his brother's untimely death, and who, subsequently was to become his constant companion until the end of his life. A section of the Beethoven Frieze

Klimt was one of the founding members and president of the Wiener Sezession (Vienna Secession) in 1897, and of the group's periodical Ver Sacrum (Sacred Spring). He remained with the Secession until 1908.

Beginning in the late 1890s Klimt took annual summer holidays with the Flöge family on the shores of lake Attersee, painting many of his landscapes there. These works constitute the only genre aside from the figure that seriously interested Klimt. In recognition of his intensity, the locals called him "Waldschrat" (Forest Demon). [3] and are of a number and quality so as to merit a separate appreciation. Formally, the landscapes are characterized by the same refinement of design and emphatic patterning as the figural pieces. Deep space in the Attersee works is so efficiently flattened to a single plane, it is believed that Klimt painted them while looking through a telescope.[4]

In 1894, Klimt was commissioned to create three paintings to decorate the ceiling of the Great Hall in the University of Vienna. Not completed until the turn of the century, his three paintings, Philosophy, Medicine, and Jurisprudence were criticized for their radical themes and 'pornographic' material. As a result, they were not displayed on the ceiling of the Great Hall. This would be the last public commission accepted by the artist. All three paintings were eventually destroyed during World War II by retreating SS forces in May 1945.

In 1902 Klimt finished the Beethoven Frieze for the Fourteenth Vienna Seccessionist exhibition, which was intended to be a celebration of the composer. Meant for the exhibition only, the frieze was painted directly on the walls with light materials. After the exhibition the painting was preserved, although it did not go on display until 1986. 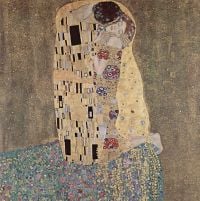 Gustav Klimt's 'Golden Phase' was marked by positive critical reaction and success. Many of his paintings from this period utilized gold leaf; the prominent use of gold can first be traced back to Pallas Athene (1898) and Judith I (1901), although the works most popularly associated with this period are the Portrait of Adele Bloch-Bauer I (1907) and The Kiss (1907-1908) which is housed in the Oberes Belvedere art museum in the heart of Vienna, off the Ringstrausse.

In 1911 his painting "Death and Life" received first prize in the world exhibition in Rome. In 1915 his mother Anna died. Gustav Klimt died of a stroke three years later in Vienna on February 6, 1918 and was interred at the Hietzing Cemetery, Vienna. Numerous paintings were left unfinished. 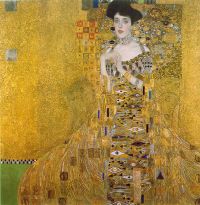 Klimt's paintings have brought some of the highest prices recorded for individual works of art. In November 2003, Klimt's Landhaus am Attersee sold for $29,128,000, but that was soon eclipsed by prices paid for other Klimts. In 2006 the artist's Apple Tree I (ca. 1912) sold for $33 million and Birch Forest (1903) sold for $40.3 million.[5] Both works had been recently restituted to the heirs of Adele Bloch-Bauer.

Did you know?
Gustav Klimt's paintings have brought some of the highest prices recorded for individual works of art

Purchased for the Neue Galerie in New York by Ronald Lauder for a reported US $135 million, on or around June 19, 2006, the 1907 portrait Adele Bloch-Bauer I deposed Picasso's 1905 Garçon à la pipe (Boy With a Pipe) (sold May 5, 2004 for $104 million) as the piece of art sold at a public auction for the highest reported price.[6] On August 7, 2006 Christie's auction house announced it was handling the sale of the remaining works by Klimt that were recovered by the Bloch-Bauer heirs after a long legal battle. They auctioned Portrait of Adele Bloch-Bauer II in November 2006 for $88 million, the third-highest priced piece of art at auction at the time.[7] Collectively the five restituted paintings, including aforementioned landscapes, netted over $327 million.[5]

Art historians note an eclectic range of influences contributing to Klimt's distinct style, including Egyptian, Minoan, Classical Greek, and Byzantine inspirations. Klimt was also inspired by the engravings of Albrecht Dürer, late medieval European painting, and Japanese Ukiyo-e. His mature works are characterized by a rejection of earlier naturalistic styles, and make use of symbols or symbolic elements to convey psychological ideas and emphasize the "freedom" of art from traditional culture. 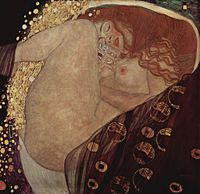 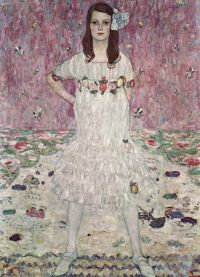 Retrieved from https://www.newworldencyclopedia.org/p/index.php?title=Gustav_Klimt&oldid=1005651
Categories:
Hidden category:
This page was last edited on 20 July 2017, at 16:31.
Content is available under Creative Commons Attribution/Share-Alike License; additional terms may apply. See Terms of Use for details.