Gonorrhea is a common, highly contagious, sexually transmitted diseases (STD) that is caused by the Gram-negative bacterium Neisseria gonorrhoeae. It is one of the most common communicable diseases in the world.

Gonorrhea affects the mucous membrane of the urinary and genital tracts, with the bacterial growing and multiplying in such areas as the urethra of men and women and the cervix, uterus, and fallopian tubes in women (CDC 2006), as well as in the mouth, throat, rectum, and eyes (CDC 2006: Greenspan and Greenspan 2002). It is transmitted very efficiently: a woman runs a 60 to 90 percent chance of contacting the disease from just one sexual encounter with an infected male (Norris 2006). It also can spread just by contact with the fluids of an infected person, not just sexual contact (Paradox and Odle 2005), and infected women also can pass gonorrhea to their newborn infants during delivery.

There is no vaccine for gonorrhea. It is a preventable disease, with the best way to avoid being infected or transmitting the disease is to abstain from sexual intercourse or to be a mutually monogamous relationship where both partners are uninfected (CDC 2006; Paradox and Odle 2005).

Neisseria gonorrhoeae is a species of Gram-negative bacteria responsible for the sexually transmitted disease gonorrhoea (Ryan and Ray 2004). Its only natural hosts are humans.

In detecting for the presence of this gonococcal bacteria, Neisseria is usually isolated on Thayer-Martin agar—an agar plate with three different antibiotics and nutrients which not only facilitate the growth of Neisseria species, but inhibit the growth of Gram-positive organisms and most bacilli and fungi. Further testing to differentiate the species includes testing for oxidase (all Neisseria show a positive reaction) and the carbohydrates maltose, sucrose, and glucose test in which N. gonorrhoeae will only oxidize (that is, utilize) the glucose. If N. gonorrhoeae is resistant to the penicillin family of antibiotics, then ceftriaxone (a third-generation cephalosporin) is often used.

Gonorrhea is a very common infectious disease. The Centers for Disease Control and Prevention (CDC) estimates that more than 700,000 persons in the U.S. get new gonorrheal infections each year (CDC 2006). Only about half of these infections are reported to CDC with 330,132 cases of gonorrhea reported to CDC in 2004. The rate of reported gonorrheal infections in 2004 was 113.5 per 100,000 individuals (CDC 2006). However, some estimate there may be as many as one million cases of gonorrhea in the United States each year, with the private nature of the disease not conducive to reporting (Norris 2006).

Men and women can become infected through sexual contact, including vaginal, oral, and vaginal intercourse, as it is spread through contact with penis, vagina, mouth, or anus (Norris 2006; CDC 2006). Merely contacting the fluids of an infected person can cause the spread of gonorrhea, not just sexual contact (Paradox and Odle 2005).

The highest risk categories in terms of age are adolescents and young adults in the 15 to 29 year-old age group, as well as those with multiple sex partners and African Americans (Paradox and Odle 2005; CDC 2006).

Infected women also can pass gonorrhea to their newborn infants during delivery, causing eye infections (conjunctivitis) in their babies (which if left untreated, can cause blindness). Doctors have often attempted to treat this immediately by applying small amounts of silver nitrate to the eyes of all newborn babies.

The bacteria thrives in the moist and warm areas of the reproductive tract (CDC 2006). The first place this bacterium infects is usually the columnar epithelium of the urethra and endocervix. Non-genital sites in which it thrives are in the rectum, the oropharynx and the conjunctivae of the eyes. The vulva and vagina in women are usually spared because they are lined by stratified epithelial cells. In women the cervix is the usual first site of infection.

Gonorrhea is spread very efficiently, with a woman having a 60 to 90 percent chance of contracting the disease with just one sexual encounter with an infected individual (Paradox and Odle 2005).

The incubation time varies from 2 to 14 days with most symptoms occurring between the second and fifth days after being infected from an infected partner. A small number of people may be asymptomatic for up to a year. Between 30–60 percent of women with gonorrhea are asymptomatic or have subclinical disease (van Duynhoven 1999).

An infected woman may complain of vaginal discharge, difficulty urinating (dysuria), including a painful or burning sensation when urinating, off-cycle menstrual bleeding, or bleeding after sexual intercourse. The cervix may appear anywhere from normal to the extreme of marked cervical inflammation with pus. Possibility of increased production of male hormones is common in many cases. Infection of the urethra (urethritis) causes little dysuria or pus. The combination of urethritis and cervicitis on examination strongly supports a gonorrhea diagnosis, as both sites are infected in most gonorrhea patients.

More advanced symptoms, which may indicate development of pelvic inflammatory disease (PID), include cramps and pain, bleeding between menstrual periods, vomiting, or fever.

It is not unusual for men to have asymptomatic gonorrhea; that is, many men lack any symptoms at all. Men may complain of pain on urinating and thick, copious, urethral pus discharge (also known as gleet, which is the most common presentation. Examination may show a reddened external urethral meatus. Ascending infection may involve the epididymis, testicles or prostate gland causing symptoms such as scrotal pain or swelling.

In men, inflammation of the epididymis (epididymitis), prostate gland (prostatitis), and urethral structure (urethritis) can result from untreated gonorrhea. Epididymitis is a painful condition of the testicles and, if untreated, can lead to infertility (CDC 2006).

In women, a common result of untreated gonorrhea is pelvic inflammatory disease, a serious infection of the female reproductive tract. PID causes scarring of the fallopian tubes, which leads to increased risks of causing an ectopic pregnancy as a fertilized egg may not be able to pass through the narrowed, scarred fallopian tube. Ectopic pregnancies are serious conditions, which are potentially life-threatening to the mother. PID can result in up to forty percent of women with gonorrhea (Paradox and Odle 2005).

In both sexes, disseminated gonococcal infection (DGI) can occur, leading to multiple distant sites of infection which can include the brain, blood, heart, and joints. If gonorrhea spreads to the blood or joints, the condition can be life threatening (CDC 2006).

When joints become involved, gonococcal arthritis can develop. Gonococcal arthritis occurs after primary infection of the genitalia, anus, or throat. This occurs in about one percent of patients who are infected with gonorrhea and is more common in women than men. Typical symptoms include a five to seven day history of fever, shaking, chills, multiple skin lesions, fleeting migratory polyarthralgias and tenosynovitis in fingers, wrists, toes or ankles. This should be evaluated promptly with a culture of the synovial fluid, blood, cervix, urethra, rectum, skin lesion fluid, or pharynx. The underlying gonorrhea should be treated; if this is done then usually a good prognosis will follow.

If a pregnant woman gives the infection to her baby as the baby passes through the birth canal at birth, the infant is at risk of blindness, joint infection, and a life-threatening blood infection (CDC 2006). 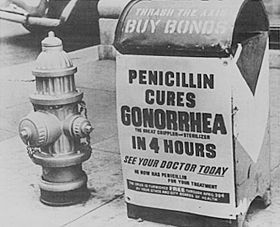 Gonorrhea treatment advertisement from 1944, when penicillin became widely available due to mass production.

The mainstay of treatment is the appropriate use of antibiotics. While penicillin was the most common antibiotic used to treat gonorrhea up until the 1970s, an increase in antibiotic resistance has led to a decline in its use. Recommendations for first choice treatment of gonorrhea must depend on local information on resistance patterns and it is not possible to make treatment recommendations that are applicable to all parts of the world.

The Centers for Disease Control and Prevention (CDC) released a report on April 12, 2007 officially adding gonorrhea to a list of super bugs that are now resistant to common antibiotics (CDC 2007).

Antibiotics that may be used to treat gonorrhea include:

These drugs are all given as a single dose.

The level of tetracycline resistance in Neisseria gonorrheae is now so high as to make it completely ineffective in most parts of the world.

The fluoroquinolones (ciprofloxacin, ofloxacin, levofloxacin) cannot be used in pregnancy. It is important to refer all sexual partners to be checked for gonorrhea to prevent spread of the disease and to prevent the patient from becoming re-infected with gonorrhea. Patients should also be offered screening for other sexually transmitted infections. In areas where co-infection with chlamydia is common, doctors may prescribe a combination of antibiotics, such as ceftriaxone with doxycycline or azithromycin, to treat both diseases.

Penicillin is ineffective at treating rectal gonorrhea: this is because other bacteria within the rectum produce β-lactamases that destroy penicillin. All current treatments are less effective at treating gonorrhea of the throat, so the patient must be rechecked by throat swab 72 hours or more after being given treatment, and then retreated if the throat swab is still positive.

Although gonorrhea usually does not require follow-up (with the exception of rectal or pharyngeal disease), patients are usually advised to phone for results five to seven days after diagnosis to confirm that the antibiotic they received was likely to be effective. Patients are advised to abstain from sex during this time.

Drug resistant strains are known to exist and are increasing in many areas of the world, including the United States, making successful treatment more difficult (CDC 2006).

The prognosis for patients with gonorrhea depends on many factors, including how early the disease is detected and the strain infected with. Patients treated early and properly can be completely cured (Paradox and Odle 2005). However, there are many potential complications.

The United States does not have a federal system of sexual health clinics, and the majority of infections are treated in family practices. A third-generation cephalosporin antibiotic such as ceftriaxone is recommended for use in most areas. Since some areas such as Hawaii and California have very high levels of resistance to fluoroquinolone antibiotics (ciprofloxacin, ofloxacin, levofloxacin) they are no longer used empirically to treat infections originating in these areas.

In the United Kingdom, the majority of patients with gonorrhea are treated in dedicated sexual health clinics. The current recommendation is for ceftriaxone or cefixime as first line therapy; no resistance to either drug has yet been reported in the UK. Levels of spectinomycin resistance in the UK are less than one percent, which would make it a good choice in theory, but intramuscular spectinomycin injection is very painful. Azithromycin (given as a single dose of 2 g) is recommended if there is concurrent infection with chlamydia. A single dose of oral ciprofloxacin 500 mg is effective if the organism is known to be sensitive, but fluoroquinolones were removed from the UK recommendations for empirical therapy in 2003 because of increasing resistance rates. In 2005, resistance rates for ciprofloxacin were 22 percent for the whole of the UK (42 percent for London, 10 percent for the rest of the UK) (HPA 2005).