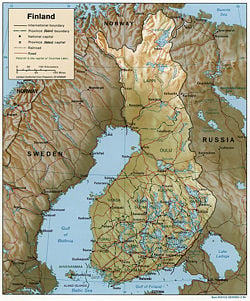 Frederick Charles Louis Constantine, prince and landgrave of the House of Hesse (May 1, 1868 – May 28, 1940), was the brother-in-law of the German Emperor William II and the elected king of Finland from October 9 to December 14, 1918. He was married to Princess Margaret of Prussia, the granddaughter of Queen Victoria of England and daughter of the late German Emperor Frederick III.

His election as king of Finland resulted from the temporary ascendancy of pro-monarchist groups in the Finnish parliament. With the defeat of Germany in World War I, the monarchy was abandoned, and Finland was declared a republic. During his brief reign, Frederick never actually set foot in his kingdom. Also known as Väinö I, he was succeeded as head of state by Kaarlo Juho Ståhlberg, Finland's first president. Frederick retired to castle Friedrichshof, near Frankfurt, where he lived out the rest of his life as a private citizen. His German name was Friedrich Karl Ludwig Konstantin, Prinz und Landgraf von Hessen-Kassel.

Frederick was born in Panker Castle on the Baltic Sea. He was the third son of the then Prince Frederick of Hesse, and his wife Princess Anna of Prussia.

The elder Frederick, a Danish military officer, had been one (and perhaps the foremost) of the candidates of Christian VIII of Denmark to succeed to the Danish throne in the 1840s if the latter's male line died out, but renounced his rights in 1851 in favor of his sister, Louise of Hesse. The elder Frederick was of Danish upbringing, having lived all his life in Denmark; but in 1875, when the senior branch of Hesse-Kassel became extinct, he settled in Northern Germany, where the House had substantial landholdings.

Eighteen days after his own birth, his first cousin, Nicholas II of Russia was born to the Grand Duchess Maria Fyodorovna, daughter of his aunt Queen Louise of Denmark, in Saint Petersburg.

Frederick married Princess Margaret of Prussia, the youngest daughter of the late German Emperor Frederick III and Princess Royal Victoria, who was the eldest daughter of Victoria of the United Kingdom on January 25, 1893. They had six children, including two sets of twins:

Finland had declared independence from Russia on December 6, 1917, leading to a debate on whether the new state should declare itself a republic or remain a monarchy. At the time of its Declaration of Independence, monarchists were a minority in the Finnish Eduskunta (Parliament), and Finland was declared a republic. However, after the Finnish Civil War, and while the pro-republic Social Democratic Party was mostly excluded from the Eduskunta, Frederick was elected to the throne of the Kingdom of Finland on October 9, 1918. A primary motive for his election was the belief that, being the brother of William II of Germany, his kingship would solidify Finland's alliance with Germany and thereby afford protection against the Russians.

The adoption of a new constitution had been delayed by the Civil War, and the legitimacy of the royal election was based upon the Constitution of Sweden of 1772, adopted under King Gustav III, when Finland had been a part of Sweden. The same constitutional document had also served as the basis for the rule of the Russian Tsars, as grand dukes of Finland, during the nineteenth century when the weakening Sweden lost Finland to the Russian Empire.

The reaction of the Bolshevik regime in Russia was thus crucial. Great Britain, the United States, Germany, France and the other Scandinavian countries were initially reluctant to recognize the newly independent Finland, waiting for the Russian reaction. When Lenin's government recognized Finland's independence, Germany, in addition to France and the other Scandinavian countries quickly followed suit.

Governmental archives reveal that the monarchical designation of the king was intended, at least tentatively, to be "Charles I, king of Finland and Karelia, duke of Åland, grand prince of Lapland, lord of Kaleva and the North."

In the Finnish election document the prince is called Fredrik Kaarle, but according to conventional wisdom his name as king would have been Väinö I of Finland. Although the correctness of this name is disputed, it is repeated in many places, for instance at the Finnish Parliament's official website. In truth, Väinö I as name was presented at the time in a satirical column in a leading Finnish newspaper, written by V. Nuorteva ("Olli"), a much-read political satirist and humorist of the time.

On November 11, 1918, the armistice between the warring factions of World War I was signed, and two days earlier William II had abdicated and Germany was declared a republic. Germany's defeat in the war and the stated fact that none of the Allies of World War I would ever accept a German-born prince as the king of Finland, led Frederick to renounce the throne on December 14, 1918, without having ever set foot on his "kingdom." He had hesitated previously due to the circumstances of his election, where approximately 40 percent of the members of the Parliament had boycotted the election.

Frederick became head of the House of Hesse after Landgrave Alexander of Hesse abdicated on March 15, 1925. He spent his remaining years quietly, residing primarily at castle Friedrichshof, near Frankfurt. He died May 28, 1940 and is buried in the chapel of Castle Kronberg.

At Frederick's death, his eldest surviving son, Philipp, succeeded him as head of the family. However, according to certain family documents and correspondence, his successor as king of Finland would have been his second surviving son Prince Wolfgang of Hesse (1896–1989), apparently because Wolfgang was with his parents in 1918 and ready to travel to Finland, whereas Philipp was unreachable, at war. It is rumored that a wedding to a Finnish lady was already in preparation for Wolfgang.