A shoe for bound feet. The ideal length for a bound foot was three inches.

Footbinding (simplified Chinese: 缠足; traditional Chinese: 纏足; pinyin: chánzú, literally "bound feet") was a custom practiced on young females for approximately one thousand years in China, from the tenth century until the early twentieth century. The practice originated among entertainers and members of the Chinese court during the Song Dynasty (960–1279). By the end of the Song dynasty, the practice had spread among the families of the scholarly class which governed China. Initially, foot binding was common only in the wealthiest parts of China, particularly in northern China. However, by the late Qing Dynasty, foot binding had become popular among people of all social classes except the poorest, who needed able-bodied women to work the fields. Women with bound feet wore special, tiny shoes decorated with beautiful embroidery. Since they were unable to do labor, the tiny feet were a symbol of privilege and wealth. Girls with small, bound feet had a better chance of getting a higher bride price.

When a girl was between the ages of three and eight years old, the four small toes on each foot were folded over and bound tightly with long bandages, which were re-wrapped every one or two days. The pressure of the bandages caused the bones to break and force the arch upward into a form referred to as “lotus foot.” The feet would not grow any longer than 3-6 inches (10-15 cm), leaving the adult woman with small and dysfunctional feet. Foot binding finally ended during the twentieth century, when Chinese and Western missionaries campaigned against it, and it was prohibited by the nationalist and Communist governments.

The custom of foot binding originated among entertainers and members of the Chinese court during the Song Dynasty (960–1279). There are several legends explaining the origin of foot binding. Chinese mythology includes the story of a fox who, in an attempt to disguise himself as an empress, concealed his feet by binding them. Another story suggests that the last empress of the Shang dynasty had a club foot, and to hide her embarrassment, persuaded her husband to make the compression of the feet obligatory for young girls. Another theory traces the practice to Prince Li Yu, who ruled one of ten kingdoms in southern China. It is said that he had a favorite concubine, “Precious Thing,” who was a suburb dancer and entertained him by dancing on pointed toes inside a six-foot-high platform shaped like a lotus flower made of gold.

Did you know?
In China, girls' feet were bound so the arch was forced upward, resulting in a "lotus foot"

The Neo-Confucian scholar Zhu Xi (1130-1200 C.E.), advocated foot binding and introduced the practice into southern Fuijan in order to spread Chinese culture and teach proper relations between men and women.[1]

By the end of the Song dynasty, the practice had spread among the families of the scholar class which governed China. Initially it was a common practice only in the wealthiest parts of China, particularly in areas around northern China. However, by the late Qing Dynasty, foot binding had become popular among people of all social classes except the poorest, who needed able-bodied women to work the fields. Women with bound feet wore special tiny shoes decorated with beautiful embroidery. Since they were unable to do labor, the tiny feet were a symbol of privilege and wealth. Girls with small bound feet had a better chance of getting a higher bride-price.[2] The tiny feet were considered sexually desirable by Chinese men. Also, a woman with bound feet was less capable of fleeing an unhappy marriage.

Minority ethnic groups in China, such as the Mongols of the Yuan Dynasty (1279–1368) and the Manchus, did not practice foot binding. The Manchu rulers of the Qing Dynasty (1644–1911) tried without success to abolish the practice. In 1645, the first Shunzhi emperor mandated that foot binding be banned, but his successor, the Kangxi emperor, revoked the ban, apparently deciding that the practice was too firmly rooted in custom. Manchu women were forbidden from binding their feet or the feet of their daughters. Instead they wore "flower bowl" shoes, which gave the illusion of tiny feet. Bound feet became an important differentiating marker between Manchu and Han. 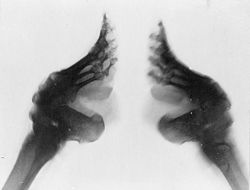 When a young girl was between three and eight years old, her feet were wrapped tightly with long strips of cloth that pressed the four small toes down around and under the balls of her feet. The bandages, which were re-wrapped at one- or two-day intervals, compressed the feet from front to back so that they could not develop normally, gradually breaking the arches and forcing them upward, so that all the girl’s weight was supported only by the back edges of her heels. When a girl's feet were bound in this manner, the four toes on each foot would break within a year; the first ("big toe") remained intact. The arch had to be well-developed for the perfect "lotus foot" to be formed, so some women would bind their girls' feet at a later age; the ideal was three-inch feet, euphemistically called “gold lotuses,” and no longer than four inches (10 cm), “silver lotuses.” Bound feet would bend, becoming so concave they were sometimes described as "lotus hooks."

The binding process caused intense pain for the child. As the girl reached adulthood, her feet would remain small and dysfunctional, prone to infection, paralysis, and muscular atrophy. A woman with bound feet could not walk normally and had to be supported while walking and even while standing. Lack of exercise caused the leg muscles to atrophy, so that the legs became very thin. Infection and atrophied flesh due to poor blood circulation were common. When the growing process ended in the girl’s teens, the constant pain stopped, but bandages were still worn to support the feet and hide their deformity. Women with bound feet walked in an unsteady, swaying fashion, referred to as the "lotus gait," which the Chinese regarded as feminine and graceful.

The earliest recorded opponent to foot binding was a writer from the Song Dynasty (960-1279) called Ch'e Jo-shui. One of the objectives of the Taiping Rebellion (1850–1864) was to establish gender equality by ending foot binding. The practice continued into the twentieth century, when a combination of Chinese and Western missionaries called for reform and a true anti-foot binding movement emerged. Educated Chinese began to understand that foot binding made them appear barbaric to foreigners, social Darwinists argued that it weakened the nation (for enfeebled women inevitably produced weak sons), and feminists attacked it because it caused women to suffer.

In 1911, after the fall of the Qing Dynasty, the new Republic of China government banned foot binding; women were told to unwrap their feet lest they be killed. Some women's feet grew 1/2 - 1 inch after the unwrapping, though some found the new growth process extremely painful and emotionally and culturally devastating. According to a study conducted by the University of California at San Francisco, "As the practice waned, some girls' feet were released after initial binding, leaving less severe deformities." Societies developed to support the abolition of foot binding, with contractual agreements made between families, promising their infant son in marriage to an infant daughter that would not have her feet bound. When the Communists took power in 1949, they maintained the strict prohibition on foot binding, which is still in effect today. Today, some elderly Chinese women still suffer from disabilities related to bound feet.

Foot binding is rarely practiced today.[3] Modern society would treat the behavior as child abuse and punish it accordingly. It is commonly cited by sociologists and anthropologists as an example of an extreme deformity (both by the standards of contemporary societies and from a medical viewpoint) being regarded as beauty, and also an example of immense human suffering being inflicted in the pursuit of a beauty standard.

Retrieved from https://www.newworldencyclopedia.org/p/index.php?title=Foot_binding&oldid=1004359
Categories:
Hidden category:
This page was last edited on 18 April 2017, at 19:39.
Content is available under Creative Commons Attribution/Share-Alike License; additional terms may apply. See Terms of Use for details.