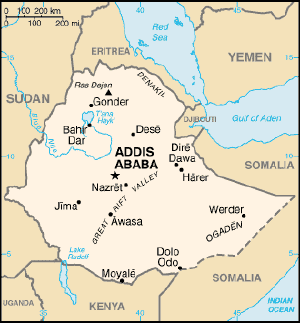 Map of Ethiopia. Italy occupied Eritrea and part of Somalia in the late nineteenth century but failed to conquer Ethiopia until 1935.

The First Italo–Ethiopian War was fought between Italy and Ethiopia in 1895-1896. Ethiopia's military victory over Italy secured it the distinction of being the only African nation to resist European colonialism with a decisive show of force. The ancient land of Ethiopia became the only African territory to avoid absorption into a European colonial empire during the nineteenth century, although areas of what became Eritrea and of Somalia where at times Ethiopia had ruled did fall to Italy, becoming Italian East Africa. After 1935, following the Second Italo-Ethiopian War, which Italy won, Ethiopia was added to Italian West Africa until liberated by Allied troops during World War II. This, though, was regarded as an illegal occupation and never had the same legal status as did the colonies of other European powers.

Some point out that Italy was perhaps the weakest of all the colonial powers, arguing that this detracts from Ethiopia’s success. Italy had only recently (1861) become a unified nation state, able to join the colonial enterprise. On the other hand, Italy was a colonial power, if not the most militarily skilled or experienced, and did win battles and annex territory right up to Ethiopia’s own borders, so Emperor Menelik deserves due credit for resisting European imperial aggression. In fact, the Italians pressed on with their campaign despite early setbacks because they could not entertain the possibility of being defeated by Africans. Had they waited before their final attempt at victory, history may have recorded a different result. The war’s result does have some symbolic significance, since it left Ethiopia to carry the torch of African pride, self-determination, and dignity for another half-century or so. Ethiopia’s victory in the First Italo-Ethiopian War may be one of the very few, if not the only example of a European power failing to get its own way in the Scramble for Africa. 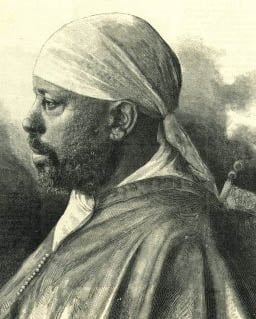 On March 25, 1889, the Shewa ruler Menelik II—having conquered Tigray and Amhara, and with the support of Italy—declared himself Emperor of Ethiopia (Abyssinia in the European parlance of the time). Barely a month later, on May 2, he signed a treaty of amity with the Italians, which apparently gave them control over Eritrea, the Red Sea coast to the northeast of Ethiopia, in return for recognition of Menelik's rule.

In fact, the bilingual Treaty of Wuchale did not say the same thing in Italian and Amharic. The former text established an Italian protectorate over Ethiopia, which Menelik discovered soon afterwards. The Amharic version, however, merely stated that Menelik could contact foreign powers and conduct foreign affairs through Italy if he so chose. Italian diplomats, however, claimed that the original Amharic text included the clause and Menelik knowingly signed a modified copy of the Treaty.[1]

In 1893, when Menelik judged that his power over Ethiopia was consolidated, he repudiated the treaty, at which point the Italians ramped up the pressure in a variety of ways, including the annexation of small territories bordering their original claim under the Treaty of Wuchale, and finally culminating with a military campaign across the Mareb River into Tigray (on the border with Eritrea) in December 1894. The Italians expected disaffected potentates like Negus Tekle Haymanot of Gojjam, Ras Mengesha Yohannes, and the Sultan of Aussa to join them; instead, all of the ethnic Tigrayan or Amharic peoples flocked to the Emperor Menelik's side in a display of both nationalism and anti-Italian feeling, while other peoples of dubious loyalty (for example, the Sultan of Aussa), were watched by Imperial garrisons.[2] Further, Menelik had spent much of the previous four years building up a supply of modern weapons and ammunition, acquired from the French, British, and the Italians themselves, as the European colonial powers sought to keep each other's North African aspirations in check. They also used the Ethiopians as a proxy army against the Sudanese Mahdists.

In December 1894, Bahta Hagos led a rebellion against the Italians in Akkele Guzay, claiming support of Mengesha. Units of General Oreste Baratieri's army under Major Pietro Toselli crushed the rebellion and killed Hagos. The Italian army then occupied the Tigrian capital, Adwa. Baratieri suspected that Mengesha would invade Eritrea, and met him at the Battle of Coatit in January 1895. The victorious Italians chased a retreating Mengesha, capturing weapons and important documents proving his complicity with Menelik. The victory in this campaign, along with previous victories against the Sudanese Mahdists, led the Italians to underestimate the difficulties to overcome in a campaign against Menelik. At this point, Emperor Menelik turned to France, offering a treaty of alliance; the French response was to abandon the Emperor to secure Italian approval of the Treaty of Bardo which would secure French control of Tunisia. Virtually alone, on September 17, 1895, Emperor Menelik issued a proclamation calling up the men of Shewa to join his army at Were Ilu.[3]

The next clash came at Amba Alagi on December 7, 1895, when Ethiopian soldiers overran the Italian positions dug in on that natural fortress, and forced the Italians to retreat back to Eritrea. The remaining Italian troops under General Giuseppe Arimondi reached the unfinished Italian fort at Meqele. Arimondi left there a small garrison of approximately 1150 Askaris and 200 Italians, commanded by Major Giuseppe Galliano, and took the bulk of his troops to Adigrat, where Oreste Baratieri, the Italian commander, was concentrating the Italian Army.

The first Ethiopian troops reached Maqele in the following days. Ras Makonnen surrounded the fort at Meqele on December 18, but the Italian commander adroitly used promises of a negotiated surrender to prevent the Ras from attacking the fort. By the first days of January, Emperor Menelik, accompanied by his Queen Taytu Betul, had led large forces into Tigray, and besieged the Italians for 15 days (January 6-January 21, 1896), trying in vain to storm the fort on several occasions, until the Italians surrendered with permission from the Italian Headquarters. Menelik allowed them to leave Meqele with their weapons, and even provided the defeated Italians mules and pack animals to rejoin Baratieri.[4] While some historians read this generous act as a sign that Emperor Menelik still hoped for a peaceful resolution to the war, Harold Marcus points out that this escort allowed him a tactical advantage: "Menelik craftily managed to establish himself in Hawzien, at Gendepata, near Adwa, where the mountain passes were not guarded by Italian fortifications."[5]

Heavily outnumbered, Baratieri refused to engage, knowing that the Ethiopians could not keep large numbers of troops in the field much longer. However, the Italian government of Francesco Crispi was unable to accept being stymied by non-Europeans. The prime minister specifically ordered Baratieri to bring about a battle. 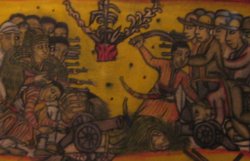 Close up of Tapestry of the Battle of Adwa.

The result was the Battle of Adowa (or Adua) on March 1, 1896. Almost half of all the Italian forces in East Africa were concentrated and engaged the Ethiopians who defeated them decisively. The actual battle took place in mountainous country north of the town of Adwa. The Italian army comprised four brigades totaling approximately 20,000 troops with fifty-six artillery pieces.

General Baratieri planned to surprise the larger Ethiopian force with an early morning attack, expecting that his enemy would be asleep. However, the Ethiopians had risen early for Church services, and upon learning of the Italian advance, swept forth to meet it, and crushed the Italians. While Menelik's victory was in a large part due to sheer force of numbers, Menelik's careful preparations had made them well-armed numbers.

Italian dead and missing numbered 14,133, with a further 4,000 captured. In addition, 2,000 Eritrean askaris were killed or captured. The Ethiopians had lost about 3,000 dead and 6,000 wounded. Italian prisoners were treated as well as possible under difficult circumstances, but 800 captured Askaris, regarded as traitors by the Ethiopians, had their right hands and left feet amputated.

End of the war: Historical legacy

Menelik retired in good order to his capital, Addis Ababa, and waited for the fallout of the victory to hit Italy. The casualty rate suffered by Italian forces at the Battle of Adwa was greater than any other major European battle of the 19th century, beyond even the Napoleonic Era's infamous Waterloo and Eylau.[6] Riots broke out in several Italian cities, and within two weeks the Crispi government collapsed amidst Italian disenchantment with "foreign adventures." Menelik secured the Treaty of Addis Ababa (1902) in October, strictly delineating the borders of Eritrea and forcing Italy to recognize the independence of Ethiopia. Signed by the Italians, British, and Ethiopians, this was one of the few treaties in the history of colonial Africa in which the European powers treated an African ruler as their equal.

Ethiopia’s victory in the First Italo-Ethiopian War may be one of the very few, if not the only, examples of a European power failing to impose its will on Africans during the Scramble for Africa. Writing to Victoria of the United Kingdom, Menelik II had stated:

I have no intention at all of being an indifferent spectator, if the distant Powers hold the idea of dividing up Africa, Ethiopia having been for the past fourteen centuries, an island of Christianity in a sea of pagans…

Unfortunately, some border areas were poorly defined by this treaty, which since at this time they were rarely guarded or patrolled was not hugely problematic. The area in question was remote and, in 1902, hardly inhabited. In the twentieth century, following Eritrean independence from Ethiopia in 1993, a border village became the object of dispute, causing the Eritrean-Ethiopian War of 1998-2000, a bloody conflict in which approximately 70,000 lives were lost.