Painting of a family game of checkers (1803)

Checkers, also called English draughts, American checkers, or straight checkers, is a form of the draughts board game played on an eight-by-eight board with 12 pieces on each side that may only move and capture diagonally.

The origin of the game can be traced as far back as the Iraqi city of Ur dating to about 3,000 B.C.E. Pharaonic Egyptians also played a checkers-like game called Alquerque on a five-by-five board. The Greek philosophers Homer and Plato mention a draughts-like game in their works. In about 1100, the French used a 64-square chessboard to play the game. Later, the rules became more set and its popularity spread to Great Britain, where it was called "draughts." In America it became known as "checkers." When a rule requiring the capture of opposing pieces was added to the game, rather than making this optional, it became the same as modern checkers.

The first world championship for the game was awarded in 1847. Random opening moves were later added to reduce the frequency of draws. Computer programs, first developed in the 1950s, have proven stronger checkers players than their human counterparts. It has now been proven mathematically that if neither player makes a mistake, the game will always end in a draw. 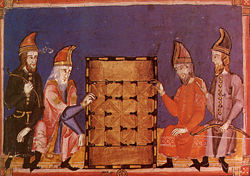 The ancient Egyptian game of Alquerque

English draughts has it origin in ancient times. Carbon dating of a game similar to draughts/checkers discovered in an archaeological dig in the Iraqi city of Ur dates to about 3,000 B.C.E. Although the precise rules of the game are not known, the board and number of pieces is not much different than today’s game. At the time of the earliest Egyptian pharaohs, a popular, checkers-like game called Alquerque was played on a five-by-five board. The ancient Greeks had a similar game as far back as 1600 B.C.E., with classical Greek philosophers Homer and Plato mentioning it in their works. So great was the attraction of the game that it was played throughout the Western World for thousands of years.

In France, the game was known as Fierges. The rules changed in about 1100 when the French utilized a 64-square chessboard to play the game. The newer French version was called Jeu Force (Strong Game), while the older version considered a gentile, social game for women and therefore known as Le Jeu Plaisant De Dames (Pleasant Game for Ladies).

Later, the rules for checkers became fixed and the game found a ready pool of players in Great Britain and America. In England, the game was called "draughts." The game became fundamentally the same as modern checkers when the rule requiring the capture of opposing pieces was added. In mid-sixteenth century Spain, books were written on the game. In 1756, William Payne, an English mathematician, wrote a learned treatise on draughts.

The game has never relinquished its popularity, with the first world championship occurring in 1847. However, it was eventually realized that with specific openings, the side to move first always had the advantage. Therefore, in 1934, opening move restrictions were created for expert players, beginning games in a seemingly random manner.

English draughts/checkers is played by two people on opposite sides of a playing board, alternating moves. One player has dark pieces, and the other has light pieces. Often, the board alternates between red and black squares. Pieces move diagonally and pieces of the opponent are captured by jumping over them. 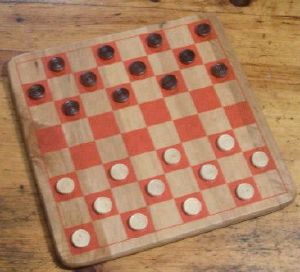 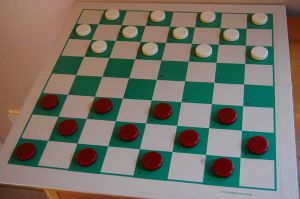 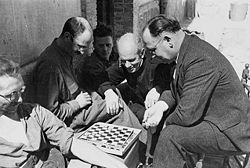 In tournament play, a variation called "three-move restriction" is preferred. The first three moves are drawn at random from a set of accepted openings. Two games are played with the chosen opening, each player having a turn at either side. This tends to reduce the number of draws and makes for more exciting matches. Three-move restriction has been played in the United States championship since 1934. A two-move restriction was used from 1900 until 1934 in the United States and in the British Isles until the 1950s. Before 1900, championships were played without restriction: this style is called go-as-you-please (GAYP).

One rule of long standing that has fallen out of favor is the "huffing" rule. In this variation, jumping is not mandatory, but a piece that could have jumped, but failed to do so, may be taken—or "huffed"—by the opposing player at the beginning of his or her next turn. After huffing the offending piece, the opponent then takes his or her turn as normal. Huffing has been abolished by both the American Checker Federation and the English Draughts Association.

Two common misinterpretations of the rules are:

The first computer English draughts program was written by C. S. Strachey, M.A., National Research Development Corporation, London, in the early 1950s. The second computer program was written in 1956, by Arthur Samuel, a researcher from IBM. It was one of the most complicated game playing programs written at the time, it is also well known for being one of the first adaptive programs, an early form of artificial intelligence. It learned by playing games against modified versions of itself, with the victorious versions surviving. Samuel's program was far from mastering the game, although one win against a known checkers master gave the general public the impression that it was very good.

In the 1990s, the strongest checkers program was Chinook, written in 1989, by a team from the University of Alberta led by Jonathan Schaeffer. Marion Tinsley, world checkers champion from 1955-1962 and 1975-1991, won a match against the machine in 1992. In 1994, Tinsley had to resign in the middle of an even match for health reasons; he died shortly thereafter. In 1995, Chinook defended its man vs. machine title against Don Lafferty in a 32-game match where each had one win and one loss, and a record-setting 30 draws. In 1996, Chinook won in the USA National Tournament by the widest margin ever, and was retired from play after that event. The man-machine title has not been contested since. The best computer programs of today are stronger than the best humans, and also stronger than Chinook was at the time when it won the man-machine title.

On July 2007, in an article published in Science Magazine, Chinook's developers announced that the program had been improved to the point where it could not lose a game. If no mistakes were made by its opponent, the game would always end in a draw.