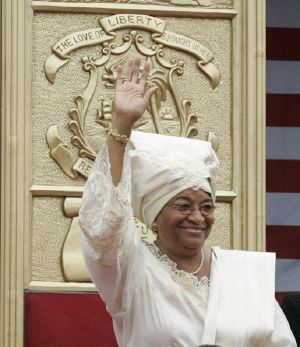 Ellen Johnson-Sirleaf (October 29, 1938 - ) is the current President of Liberia, Africa's first elected female head of state and Liberia's first elected female president. She was elected as the 23rd President in the 2005 presidential election, taking office in January 2006. Referred to as the "Iron Lady," this is an intended comparison with Great Britain's first woman Prime Minister, Margaret Thatcher.[1] For anyone to become head of their state is a significant achievement, regardless of their gender. However, few women have been elected to comparable office elsewhere in the world, so as the first ever women head of a modern African state, Johnson-Sirleaf has assured herself a place in history. She was Minister of Finance 1972-3, then a senior official with Citibank in Nairobi (1883-85), then she was an Assistant General-Secretary of the United Nations, working with the Development Program's African office (1992-1997).

She came to office promising peace and stability after fourteen years of war, violence, and civil strife. Her own life tells a story of personal courage, including imprisonment and exile. Her success in the private sphere means that she could have remained outside of politics. However, she has chosen public service because she believes that her skills, especially in the economic field, equip her for leadership. She was also convinced that in a nation ravaged by a war largely waged be men, a woman might help to heal the people's wounds. She is an advocate of women's role in peacemaking, arguing that women bring a particular sensitivity to peace negotiations, and should be represented by right. She has received the Presidential Medal of Freedom, the highest civilian honor from the United States, where she attended University. FORBES ranks her 51st on the list of the 100 most powerful women in the world.[2]

Two of Johnson-Sirleaf's grandparents were indigenous Liberians. Her father, the son of the Gola Chief Jahmalae and Jenneh, one of his many wives, was born in Julejuah, Bomi County. As a result of her grandfather's friendship and loyalty to President Hilary Richard Wright Johnson, and on the advice of the President, her father was brought to the capital, his name changed to Johnson, and he was given to the settler family, McCritty.

Johnson-Sirleaf graduated from the College of West Africa (Monrovia), a United Methodist high school. She received a Bachelor of Science in Accounting at the University of Wisconsin in Madison, Wisconsin, U.S., in 1964, an economics diploma from the University of Colorado in 1970, and a Master of Public Administration from Harvard University in 1971. She is a member of Alpha Kappa Alpha Sorority, Incorporated,[3] a social action organization and the first collegiate sorority founded by and for Black women (1908).

On November 5, 2007, President George W. Bush awarded Johnson-Sirleaf the Medal of Freedom, the highest civilian award given by the United States.

Johnson-Sirleaf is the mother of four sons (two live in the United States and two live in Liberia) and has eight grandchildren. Some of her grandchildren live in Atlanta, Georgia, Florida, and London. She is also married and also divorced.

Returning to Liberia after Harvard, Johnson-Sirleaf became Assistant Minister of Finance in President William Tolbert's administration (1972-3). In 1980, Tolbert was overthrown and killed by army sergeant Samuel Doe, ending decades of relative stability. Doe was a member of the Krahn ethnic group and was the first Liberian president not to be descended from the elite ex-American slave community. For the next ten years, Doe allowed the Krahn people to dominate public life. She was placed under house arrest in 1985, for criticizing the regime, and has been imprisoned on several occasions.

After the overthrow of Tolbert, Johnson-Sirleaf went into exile in Nairobi, Kenya, where she worked for Citibank. She returned to run for Senate in 1985, but when she spoke out against Doe's military regime, she was sentenced to ten years in prison. Released after a short period, she moved to Washington, D.C. She returned to Liberia again, in 1997, in the capacity of an economist, working for the World Bank, and Citibank in Africa. From 1992-1997, she worked for the UNDP with the equivalent rank of an Assistant Secretary-General of the United Nations.

Initially supporting Charles Taylor's bloody rebellion against President Samuel Doe in 1990, she later went on to oppose him, and ran against him in the 1997 presidential election. She managed only 10 percent of the votes, as opposed to Taylor's 75 percent. Taylor charged her with treason. She campaigned for the removal of President Taylor from office, playing an active and supportive role in the transitional government, as the country prepared itself for the 2005 election. With Taylor's departure, she returned to take over the leadership of the Unity Party.

In 1999, she was one of seven "eminent persons" nominated by the Organization of African Unity to investigate the Rwandan Genocide.

During the election campaign, the grandmother figure was often dwarfed by her party officials and bodyguards. One veteran of Liberia's political scene said Mrs. Johnson-Sirleaf's nickname comes from her iron will and determination.

It would have been much easier for her to quit politics and sit at home like others have done but she has never given up.[4]

She stressed that if elected she would combat corruption and work for national reconciliation and that she would include her opponent in her government. She argued that as a woman who had played no role in the war she could help to heal the wounds of war, bringing motherly "sensitivity and emotion to the Presidency." Although much of her support came from women, she also attracted men who agreed that it might be time to give a woman a chance, as one male voter said, "We need a woman to out things right."[5] She promised to reform the land tenure system, a source of dispute between different ethnic groups. In the first round of 2005 voting, she came second, with 175,520 votes, putting her through to the runoff vote on November 8, against former soccer player George Weah. On November 11, the National Elections Commission of Liberia declared Johnson-Sirleaf to be president-elect of Liberia. On November 23, they confirmed their decision, saying that Johnson-Sirleaf had won with a margin of almost 20 percent of the vote. Independent, international, regional, and domestic observers declared the vote to be free, fair, and transparent.[6] Her supporters say she has two advantages over the man she faced in the run-off: She was better educated and a woman.[7] She also promised to "encourage woman across Africa to seek high political office."[8] Her inauguration took place on January 16, 2006; foreign attendees of the ceremony included Condoleezza Rice, Laura Bush, and Michaëlle Jean. 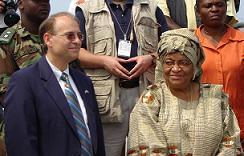 She began her inaugural address with a period of silent commemoration for those who died in the civil war, then promised change:

This occasion, held under the cloudy skies, marks a celebration of change and a dedication to an agenda for a socio-economic and political reordering; indeed, a national renewal.

Today, we wholeheartedly embrace this change. We recognize that this change is not change for change sake, but a fundamental break with the past, thereby requiring that we take bold and decisive steps to address the problems that for decades have stunted our progress, undermined national unity, and kept old and new cleavages in ferment.

As we embrace this new commitment to change, it is befitting that, for the first time, the inauguration is being held on the Capitol Grounds, one of the three seats of Government. We pledge anew our commitment to transparency, open government, and participatory democracy for all of our citizens.[9]

On March 15, 2006, President Johnson-Sirleaf addressed a joint meeting of the United States Congress, asking for American support to help her country “become a brilliant beacon, an example to Africa and the world of what love of liberty can achieve.”[10]

Uncomfortably for Johnson-Sirleaf, former President Charles Taylor's followers remain, in large numbers, in Liberia's government. Taylor's estranged wife, Jewel Howard Taylor, is in the Senate. So is Prince Johnson, whose gruesome torture and murder of President Samuel Doe, in 1990, was captured on a widely-distributed videotape.

She has made education of girls a priority. She has set up the Liberia Education Trust, with an ambitious school building and teacher training program. In June 2008, she established the 1st Peace Girls Leadership Dialogue of the Women Peace and Security Network in Africa.[11]

On July 26, 2007, President Sirleaf celebrated Liberia's 160th Independence Day under the theme "Liberia at 160: Reclaiming the future." She took an unprecedented and symbolic move by asking 25 year old Liberian activist Kimmie Weeks to serve as National Orator for the celebrations. Kimmie became Liberia's youngest National Orator in over a hundred years and delivered a powerful speech. He called for the government to prioritize education and health care. A few days later, President Sirleaf issued an Executive Order making education free and compulsory for all elementary school aged children.

Although her record in office will be evaluated by what she achieves during her presidency, the fact that she is the first women head of a modern African state assures her place in history. Her commitment to democracy and to development earned her nation's confidence. Her commitment to enabling more women to participate in peacemaking around the world is likely to be strengthened when pursued from the Executive Mansion. She has argued that women should be assured a place at peace talks through ensuring that a gender-balance is built into all international initiatives. Speaking about women's role in peace making, she says:

Women are more concerned about people…. They are in the homes carrying the burden of the home and the family. [From that experience,] women bring a sensibility, a sensitivity, to those things which bring peace.[13]

Retrieved from https://www.newworldencyclopedia.org/p/index.php?title=Ellen_Johnson-Sirleaf&oldid=1062283
Categories:
Hidden category:
This page was last edited on 31 December 2021, at 11:08.
Content is available under Creative Commons Attribution/Share-Alike License; additional terms may apply. See Terms of Use for details.