Edward Albert Shils (July 1, 1910 – January 23, 1995) was a Distinguished Service Professor in the Committee on Social Thought and in Sociology at the University of Chicago. An influential sociologist, he was known for his research on the role of intellectuals and their relations to power and public policy. His work was honored in 1983 when he was awarded the Balzan Prize. In 1979, he was selected by the National Council on the Humanities to give the Jefferson Lecture, the highest award given by the U.S. federal government for distinguished intellectual achievement in the humanities.

Shils believed in liberty and reason, sustained by an organic, coherent, but plural society. He also respected tradition and regarded religion not as revealed truth but rather as a necessary component of culture and human life, which are imperfect and impoverished without it.

Edward Shils was born on July 1, 1910 in Springfield, Massachusetts.[2] He grew up in Philadelphia, where he went to high school. While still in high school he became fascinated by the works of German sociologist Max Weber, an interest that continued throughout his career.

Shils was "a Jewish agnostic, raised in Quaker Philadelphia, matured in Baptist Chicago, and committed to secular reason,"[3] a private person whose interests took him around the world many times over. In addition to his many teaching appointments and guest lectures in Europe, Shils visited India for an extended period in 1955 and 1956, returning for almost yearly visits over the next ten years.

He married historian Irene Coltman in England in December, 1951.[4] They had one son, Adam. Shils later divorced Irene.

In 1979, Shils was selected by the National Council on the Humanities to give the Jefferson Lecture, the highest award given by the U.S. federal government for distinguished intellectual achievement in the humanities.[5] His work was honored in 1983 when he was awarded the Balzan Prize.

Shils had a fraught relationship with Saul Bellow, a colleague at the University of Chicago who also served on the Committee on Social Thought. Shils served as his "mentor, character model and editor" and figures prominently in many of Bellow's novels, including Mr. Sammler's Planet (Artur Sammler), Humboldt's Gift (Professor Durnwald), and Ravelstein (Rakhmiel Kogon). Artur Sammler and Professor Durnwald are both described glowingly, but in Ravelstein the Shils character is treated with "animosity [that] reaches lethal proportions" following a falling out between the two.[6]

Edward Shils died on January 23, 1995 at his home in Chicago, at the age of 84. He was survived by his son and daughter-in-law, Adam and Carrie Shils of Chicago; a grandson, Sam Shils; and a nephew, Edward Benjamin Shils, professor emeritus at the University of Pennsylvania[7]

Shils came to the attention of Louis Wirth, a distinguished sociologist at the University of Chicago, who hired him as a research assistant. Thereafter, Shils became recognized as an outstanding teacher in the field of sociology. His knowledge of the literatures of numerous cultures and fields was deemed to be impressive. He taught sociology, social philosophy, social thought, and other subjects although he did not have a formal degree in those fields. Shils was a member of the American Academy of Arts and Sciences and the American Philosophical Society.

He served with the British Army and the United States Office of Strategic Services during World War II. This experience, which included interrogating German prisoners-of-war, informed his interest in "the primary group," the lowest body in organized society, and the idea of the social function of tradition. While his contemporaries regarded tradition as irrational inheritance from the more primitive past, Shils saw in tradition the basis for continuity of both rational and irrational thought. In his dismay at the rejection of tradition by the focus on freedom, progress, and rationality which led to the degeneration of Western Liberalism into individualism, he found in the scientific community a group of intellectuals he could admire. His interactions with scientists involved in development of atomic bombs in World War II, led to the launching of the Bulletin of the Atomic Sciences with dual missions:

One mission was to urge fellow scientists to help shape national and international policy. A second mission was to help the public understand what the bombings meant for humanity.[8]

Upon returning to Chicago, he was appointed Associate Professor in 1947, and Professor in 1950. In 1953 he received a joint appointment to the Committee on Social Thought, an interdisciplinary program founded in 1941, and to the Department of Sociology. In 1971, he was named Distinguished Service Professor where remained, teaching until his death in 1995.

In 1949, Talcott Parsons, whom Shils had first met in Chicago in 1936, invited him to Harvard University to collaborate on developing "action theory." This led to their major work, Toward a General Theory of Action published in 1951, and to their continued efforts to provide a unified understanding of society based on the interconnectedness of all social actions and actors. 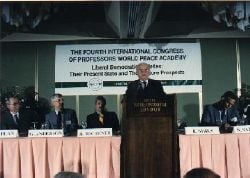 Shils delivering his closing Plenary address at the Fourth International Congress of PWPA on "The Present State and Future Prospects of Liberal Democracy."

In 1962, Shils founded the periodical Minerva which in his words, "begins with the assumption that pure science is the heart of scientific work, and the university is its proper place."[3] The organization of science, respect for tradition, defense of cultural freedom, and the proper function of intellectuals and of the universities are themes that ran through his work. Shils became well known for his research on the role of intellectuals and their relations to power and public policy. A specialist in the works of Max Weber, he also translated the works of sociologist Karl Mannheim into English. His study of the German sociologists, such as Weber, Simmel, and Mannheim, as well as his interactions with colleagues in Chicago, led him to formulate novel ways of thinking about social groups and the role played by scholars and scholarship in human affairs.

Shils made consistent efforts to bridge the research traditions of German and American sociology. At Chicago, he attracted leading European scholars to teach at the University, including Arnaldo Momigliano, Raymond Aron and the British sinologist Michael Loewe, among others. In 1989, he chaired the Fourth International Congress of PWPA (Professors World Peace Academy) held in London. In his presentation he drew attention to the distinction between the "civil person" and the "civil society" as compared to the "citizen" and the "state," pointing to conditions that threaten to erode civility and endanger liberal democracy.

In his acceptance speech when awarded the 1983 Balzan Prize, Shils remarked:

After many years spent in wrestling with the problems of the constitution of society, the foundations of social order, and the causes of the disruption and disorder of social life, I have moved more and more to the study of the role played by knowledge in the life of individuals and societies. I have tried to estimate the autonomy of traditions of scientific and scholarly knowledge and the gauge the capacities of different kinds of knowledge for universal expansion and affirmation. Although Minerva is confined to the natural and social sciences and the humanities, the interests which have impelled the work which I now have in hand, reaches out to embrace religious and philosophical knowledge and wisdom, too.[9]

Shils was the founder and editor of Minerva: A Review of Science, Learning and Policy, the world's leading journal of the social, administrative, political, and economic problems of science and scholarship. He also was a co-founder of the Bulletin of the Atomic Scientists. Both these publications continue to provide a forum for discussion of scientific endeavors among natural and social scientist.

His friend and colleague at Oxford, Hugh Trevor-Roper noted about Shils:

He believed in liberty and reason sustained by an organic, coherent, but plural society. ... he respected tradition and regarded religion not indeed as revealed truth but as a necessary component of culture and human life, which are imperfect and impoverished without it.[3]

Considered an "academic of renown in his own time,"[10] after his death, Shils was lauded by numerous colleagues for his scholarship: "He was a scholar of the highest eminence. ... He made great contributions to all the humanistic sciences" (Sir Hugh Lloyd-Jones, former professor of Greek at Oxford University). According to The Times Higher Education Supplement:

He is essentially an intellectual's intellectual and scarcely a single corner of the Western cultural tradition has not benefited from the illumination afforded by his penetrating and often pungent attention.[11]

He was known as a formidable force in the University of Chicago's Committee on Social Thought, and an exacting dissertation advisor:

If you wrote a dissertation under Edward, you were sent to the south of England, thence to Sumatra and back, but when you were done, you really knew everything about your subject. Many a student must have left his apartment, heart weighted down with a list of another thirty tomes he would have to plough through and head spinning from having discovered that, to take the next logical step in his studies, he would have to learn Polish.[12]

His students learned many things from Shils, including how best to peel an orange:

One begins by cutting off both ends of the orange. One then cuts roughly six segments in the jacket. Then one strips away, easily enough, the jacket segments. ... Like the Shils method for writing a dissertation, it appears at first the long way round, but the reward comes in the satisfaction one feels at project's end.[12]

A large photo of Shils hangs in the Shils Reading Room at the University of Chicago's Social Science Research Building, a reminder of his many years of service to that educational institution, fittingly present where subsequent generations of scholars can at least glimpse the vast knowledge he had gained through his reading.