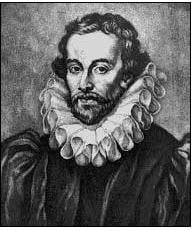 Sir Edward Coke (pronounced "cook") (February 1, 1552 – September 3, 1634), was an early English jurist, parliamentarian, and lawyer whose detailed writings on British common law served as the definitive legal texts for modern law thereafter. He remained a lifelong rival of Sir Francis Bacon. Coke is best known for his prevention of royal interference from manipulating the independence of common law courts, and for his revolutionary interpretation of the Magna Carta, which he applied to all subjects equally. Coke was also prominent in the 1628 drafting of the Petition of Right.

Coke's works served not only as the definitive legal texts of his time for British common law, they also provided a foundation for the system of checks and balances enshrined in the United States Constitution. Coke is famous for his assertion of the "Castle Doctrine"—that one should be safe in one's own house—which in many jurisdictions is considered today an exception from the obligation to retreat rather than use violence when threatened. In his legal opinions and in his life, Coke maintained an integrity that proved incorruptible, resisting efforts by those with power to abuse it at the expense of the common people and laying the foundation for the establishment of a peaceful world.

Coke was born the son of a British barrister in 1552, in Mileham, Norfolk. The sole son out of eight children, Coke began his education at the Norwich School and later attended Trinity College, Cambridge, from 1567 to 1571. Upon completion of his early education, Coke was admitted to the Inner Temple, a prestigious college of the University of Law, where he would quickly rise from student, to barrister, and to the eventual position of senior member.

In 1582, Coke married the wealthy Bridget Paston, whereupon he gained a great fortune in both money and land. The marriage produced seven children, though Bridget died just seven years later in 1589. Shortly after, Coke married the young Lady Elizabeth Hatton, granddaughter to close friend Baron Burghley, chief minister to Queen Elizabeth I. The marriage, which produced one daughter, ended in separation.

In his later years, Coke retired to Stoke Poges, Buckinghamshire, where he died at the age of 82. Upon his death, Coke’s papers were seized by King Charles I. When released, his reports would serve as a monumental compilation of independent ideals and judicial principles that continue to define modern law today.

In 1589, Coke became a member of Parliament, and in 1592, was appointed the Speaker of the House of Commons. One year later, he was appointed England's Attorney General, a prestigious post for which he competed with rival Sir Francis Bacon. During this period, fiercely loyal to Queen Elizabeth I, Coke remained a zealous prosecutor, accepting famous cases of treason against Earls Henry Wriothesley and Robert Devereaux, as well as Sir Walter Raleigh and the Gunpowder Plot conspirators.

After the ascension of the Stuarts to the throne, Coke's opinions with regard to the monarchy and their authority changed. In 1606, Coke was appointed Chief Justice of the Court of Common Pleas, and, in 1613, was elevated to Chief Justice of the King's Bench, where he continued his defense of the English common law. It was during his time as Chief Justice that Coke first ruled common law to serve as supreme law for all parties, including the monarchy. In a celebrated opinion, he stated that the monarchy could not, by proclamation, change any part of the common law, nor create any new offense that was not already an offense in common law.

Coke’s political rise came at the expense of rival Sir Francis Bacon, and in 1616, at the encouragement of Bacon, Coke was removed from the position of Chief Justice by King James I for his refusal to weigh the King’s judicial opinion in legal matters. In 1620, Coke again served as a member of parliament, but proved so troublesome to the crown that he was imprisoned for six months. Coke’s radicalism persisted, and in 1628, became influential in helping to draft the British Petition of Right, a charter of liberties defining the supremacy of common law over the sentiments of aristocracy. Inclusive in these articles was a required parliamentary consent for taxation, and a statement of charges against those under arrest.

Perhaps Coke's most lasting contribution to British law was his interpretation of the Magna Carta, which he applied to the protection not only of nobles but of all subjects equally. This interpretation effectively established the law as a guarantor of rights among all subjects, including cases against Parliament and the King. Coke famously asserted: "Magna Carta is such a fellow, that he will have no sovereign."

Coke’s influential Reports (1600-1611, 1650-1659), compiled over forty years, served as the definitive legal texts of the time and continue to influence aspects of modern law today. These volumes, which incorporate notes on every case heard by Coke, also include judicial sentiments of earlier legislative hearings and are the basis for the modern legal reports. Additionally, Coke’s influential Institutes of the Laws of England (1628-1664) stands as the first accessible body of law to be published.

In 1620, copies of Coke's writings arrived in North America via the Mayflower. Each practicing lawyer within the English colonies and early United States was trained from Coke's writings, particularly his Reports and Institutes. His radical ideas also played a large role in the American Revolution, influencing leaders such as John Adams, James Otis Jr., and Patrick Henry. These revolutionists used many of Coke’s ideas to nullify Parliament’s harmful regulations, to develop the U.S. Constitution, and to define the power of Judicial Review, which served to abolish any legislation in violation of the Constitution:

Since the days of Sir Edward Coke, the legislative body of England has been recognized as holding an essential constitutional check against excessive executive and judicial power, a check that was later written into Article III of our own Constitution of the United States of America (1787). Essentially because of the stalwart actions of Coke and other English jurists, our nation inherited a governing system that refused to recognize the decrees of any one person, of any one court, or of any one branch of government as the organic laws of the land (Ford 2004).

In 1794, Coke famously asserted within The Institutes of the Laws of England that "A man's house is his castle…and where shall a man be safe if it be not in his own house?" This concept, later known as the Castle Doctrine, is currently applied within sections of U.S. law today. Under Coke’s reasoning, the Castle Doctrine designates one's home, or any place legally occupied such as one's car or place of work, as a place in which one enjoys protections from both prying and violent attack. In the United States, laws impose an obligation to retreat before using force to defend oneself. The Castle Doctrine provides for an exception to this duty—provided one is attacked in one's own home, vehicle, or place of business, in jurisdictions where "castle laws" are in effect, one may stand one's ground against an assailant without fear of prosecution.