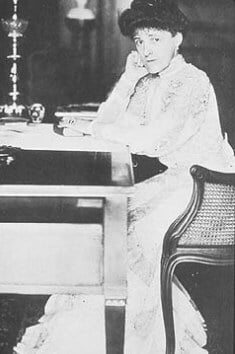 Edith Wharton (January 24, 1862 – August 11, 1937) was an American novelist and short story writer who became one of the most popular authors of the turn-of-the-century period. Wharton is often compared to her close friend and fellow novelist Henry James because of her stately, urbane style of writing and her preoccupation with the livelihoods of wealthy, American women. Wharton's style, however, is often praised for being cleaner and more easily readable than that of James. Although she lived in the early decades of Modernism, her prose was not marred by the ornate complexity and symbolism common to the Modernists, and the gracefulness of her writing, the vividness of her characters, and the swiftness of her plots have caused many readers to compare her favorably with Jane Austen.

Comparisons aside, Wharton is one of the most significant American novelists of the early twentieth century, one of the consummate masters of American prose, and one of the most important woman writers in the American literary canon.

Born Edith Newbold Jones, to a wealthy New York family often associated with the phrase "Keeping up with the Joneses," Edith grew up in a world of extraordinary luxury, and the themes of upper-class life would dominate her fiction. She was educated privately by tutors as the family traveled widely across Europe and the United States.

In 1885, at 23 years of age, she married Edward Robbins Wharton, who was twelve years her senior. Although she had privately published a collection of poetry at the age of sixteen and had read widely throughout her early life, Wharton did not begin to write seriously until several years after her marriage. Wharton consciously took the prose of Henry James as a role-model, adopting James' elegant prose-style as well as his strict adherence to narrative form and his tendency to use fiction as a means of investigating moral dilemmas. In the 1890s she submitted a handful of poems and short stories to periodicals such as Harper's. During this time Wharton also took up an additional career as an expert on interior design, publishing a book The Decoration of Houses on the subject in 1897. Towards the close of the decade, in 1899, she published her first collection of stories, The Greater Inclination, followed closely by a similar collection Crucial Instances, in 1901.

Beginning in the early 1900s, Wharton began to write novels. The Valley of Decision was the first to be published in 1902. It would not be until 1905, however, with the publication of her masterpiece The House of Mirth that Wharton would break into her own as a serious novelist and fiction-writer. The novel, a deeply ironical critique of New York upper-class society, was immediately popular and Wharton became an overnight literary celebrity. The House of Mirth is still acclaimed for the elegant clarity of its narrative, as well as for its wry sense of humor and the ultimate impact of its tragic conclusion.

Finding herself with a much wider audience, Wharton began to write novels rapidly, and some critics have argued that as her productivity increased the quality of her fiction began to decline. Among the works published during this middle period is the widely-acclaimed novella Ethan Frome (1911) and several novels, including The Reef (1912), The Custom of the Country (1913), and Summer (1917). In 1920 Wharton published The Age of Innocence; it would earn her the Pulitzer Prize, and all critics agree that it represents one of the greatest achievements of early twentieth-century American literature, as well as Wharton's most profoundly accomplished work of art. The Age of Innocence tells the story of tragic romance between Newland Archer and Ellen Olenska, two members of an elite circle in New York upper society who fall deeply in love, but are unable to escape the confines of their rigidly traditional world and resign themselves to unhappy marriages with other people.

An admirer of European culture and architecture, Wharton crossed the Atlantic 66 times, continuing to publish articles and volumes on interior design and decorating, as well as a number of travel books. From 1907 on, she made her primary residence in France, residing first at 58 Rue de Varenne, Paris. Then, in 1918, once the chaos of the Great War had subsided, she abandoned her fashionable apartment for the more tranquil Pavillon Colombe, in nearby Saint-Brice-sous-Forêt.

With the help of her influential connections in the French government, she was among the few foreigners in France who had any access to their funds during the war, ennabling her to travel extensively by motorcar to the dangerous front lines of the action. Wharton described these trips in a series of articles later published as Fighting France: From Dunkerque to Belfort.

In Paris, she labored tirelessly in charitable efforts for refugees, and for her indispensable aid, she was named a Chevalier of the Legion of Honor in 1916. The scope of her relief activities is astounding: Wharton operated work rooms for unemployed Frenchwomen, held concerts to provide work for musicians, supported tuberculosis hospitals, and founded the American Hostels for the relief of Belgian refugees. In 1916, Wharton edited a volume entitled The Book of the Homeless, featuring writings, art, and musical scores from many of the biggest names in the artistic fields of the day. After the war, she returned to the United States only once more—to receive her honorary doctorate from Yale University in 1923.

Despite their poverty and great distance from her own refined world, she was fascinated and encouraged by the gathering of the artistic community in Montmartre and Montparnasse at the turn of the century, where such literary giants as Gertrude Stein, Ernest Hemingway, F. Scott Fitzgerald and Ezra Pound were in residence. Wharton was friend and confidante to many gifted intellectuals of her time, including James, Sinclair Lewis, Jean Cocteau, and Hemingway, who were all guests of hers at one time or another. Her meeting with Fitzgerald is described by the editors of her letters as "one of the better-known failed encounters in the American literary annals." She was also good friends with Theodore Roosevelt.

Wharton continued writing to the end of her life, though her works in the latter decades of her life are largely considered to be of lesser quality than her earlier pieces. She died on August 11, 1937, in Saint-Brice-sous-Forêt, France. She is buried in the Cimetière des Gonards in Versailles, France.

Wharton's last novel, The Buccaneers, was unfinished at the time of her death. Marion Mainwaring finished the story after carefully studying the notes and synopsis Wharton had previously written. The novel was published in 1938 (unfinished version) and 1993 (Mainwaring's completion).